UE-GE Conference Board, Locals
Preparing for May Start of Bargaining 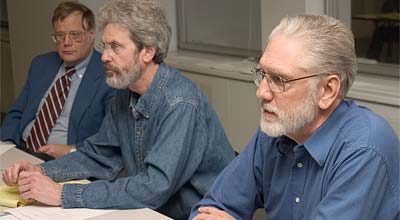 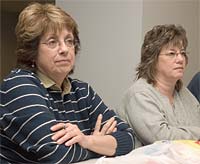 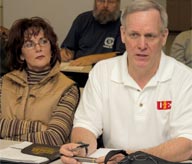 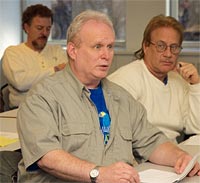 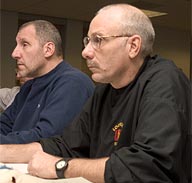 The need for thorough preparation and membership involvement for next year’s National Contract negotiations with General Electric was the focus of discussion among delegates at the GE Conference Board meeting here on December 1. Delegates also put forward a wide range of bargaining demands for negotiations which will get underway in New York City next May. The UE-GE National Contract expires on June 17.

Conference Board Secretary Steve Tormey reported that the results of the union’s bargaining surveys across the GE chain reflected the members’ emphasis on traditional concerns of improved wages and benefits, combined with an opposition to any potentially concessionary proposals on the part of the company — particularly to more medical insurance cost shifting. Local 506 President Frank Fusco reported that his membership participated heavily in the surveys. Improved medical insurance and pensions topped the list of benefits concerns, while job security was the contract language issue cited by the majority of members as most important.

General President John Hovis reported progress in the union’s ongoing effort to improve the communications and overall functioning of the Coordinated Bargaining Committee of GE unions (CBC). He noted that the October meeting of CBC local union leaders in Saratoga Springs, NY was a positive step in this regard. Ed Havaich, President of Local 751 in Niles, OH, stated that the meeting had given his local’s delegates a much needed opportunity to meet with delegates from an IUE/CWA local in the lighting division, who make some of the same products as the Niles location.

Local 506 Business Agent Pat Rafferty, who chaired the Conference Board meeting, also commented favorably on the Saratoga meeting, and noted that the major CBC contract rally will take place in Erie on June 2, with planning already underway. Rafferty and other delegates commented on the enthusiastic response by leaders of other CBC unions to Steve Tormey’s presentation in Saratoga about GE medical costs, and noted that the other GE unions seem very favorably inclined this year toward UE’s ideas and the experience and expertise we bring to the bargaining table. Mark Pierson of Local 506 said delegates from other union locals, who had many complaints about GE’s lean production policies, were surprised and impressed to learn that Local 506 has a negotiated local supplement governing the use of lean production methods.

During local reports, Local 332 Business Agent-elect Bruce Reece and President-elect Scott Gates updated the delegates on the aftermath of a successful grievance strike, and said that thus far it has improved the company’s handling of overtime procedures.

Political Action Director Chris Townsend reported on the recent Congressional elections, noting that while the ousting of Republicans from control of Congress was a most welcome and significant development, it remains crucial to hold the Democrats’ feet to the fire on such important issues as health care, trade policy and the Iraq war. He noted that the UE had gotten out more leaflets and detailed material on key Senate and House races than ever before.

Field Organizer John Thompson gave the organizing report, stating that the union now had active contacts with GE workers in several non-union plants. These are primarily newer locations, acquired by GE in recent years, with no history of union organization. Thompson noted that conditions such as low pay, mandatory overtime, and extensive use of temporary workers were common in these locations.