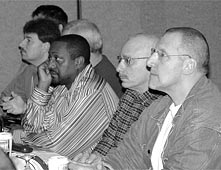 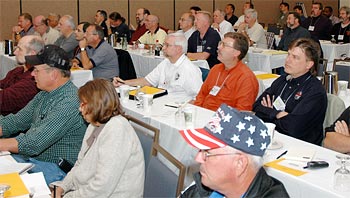 GE local union leaders from across the country met here on October 20-21 [2006] to lay plans for upcoming national negotiations with General Electric. The meeting was held under the auspices of the Coordinated Bargaining Committee (CBC), a bargaining coalition of 13 unions with members in the GE chain. UE was among those who suggested holding the meeting, the first of its kind in several years, to promote unity and joint action within the CBC. Delegates took full advantage of the opportunity to meet and compare notes with their counterparts in other unions.

The following day’s plenary session was chaired by IUE/CWA President Jim Clark, who also serves as CBC chairman. While reminding delegates of GE’s enormous profitability, Clark stressed that close cooperation among CBC unions would be essential to successful negotiations next year. UE General President John Hovis also emphasized the need for unity. Hovis noted that the issue of health insurance had been the toughest in the last several GE negotiations, and all indications are that it will be even more difficult this time.

Following that theme, UE-GE Conference Board Secretary Steve Tormey made a detailed presentation on GE’s medical costs, debunking several GE claims on the subject. Delegates reacted with enthusiasm to Tormey’s talk. Delegates also heard the results of bargaining surveys across the country which showed that wages, pensions, medical insurance and job and income security continue to be among the top priorities of GE union members.

The afternoon session was comprised of workshops in which delegates from different unions shared ideas on membership mobilization and education in support of union bargaining demands. The UE-GE National Contract, as well as the contracts of most CBC unions, expires next June 17, with bargaining scheduled to begin in May.