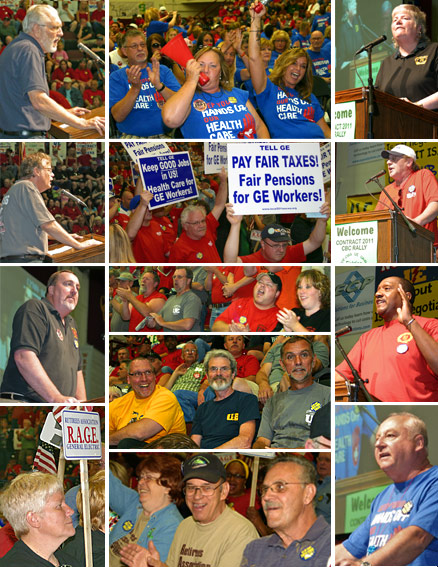 It was a joyous celebration of working-class unity, as workers with shared aspirations and the same giant employer bridged distances of miles and past differences between unions. But alongside the cheers of solidarity and friendship was the shared determination to stand and fight against unrestrained corporate greed that seeks to impose hardships and injustices on GE’s workers, past, present and future.

On Saturday, June 4 the Hammermill Center auditorium at Erie’s Gannon University was filled to capacity by 3,500 union members, from more than 20 states, gathered to support each other to speak with a single voice to the General Electric Company. In a high-energy rally lasting nearly two hours, these workers sent a powerful and unequivocal message to the General Electric Company: We are prepared to fight if necessary, if the company does not, by the contract expiration date of June 19, back off from its outrageous attacks on healthcare, pension and wages.

Labor organizations attending the big June 4 rally in Erie included GE local unions from a number of locations, other Erie-areas unions who came to show their support, and locals of UE and other unions who traveled to Erie in solidarity with GE workers. In addition, the international and national unions of the IUE-CWA, IAM, UAW and UE were represented at the rally.

A few unions may have been present but not signed in, but these are the labor organization that we know were in attendance.

Most in the crowd were Erie GE workers, members of UE Locals 506 and 618, along with pensioners from Erie’s Retirees Association of General Electric (RAGE). But many were GE workers from other plants and unions who traveled great distances to participate in this unity rally. IUE-CWA Local 761 in Louisville, Kentucky brought 300 members in four buses. UAW and IAM members came from Evandale, OH, and Steelworkers members from Logan, OH. UE Local 332 sent a delegation from Ft. Edward, NY and IUE-CWA Local 301 in Schenectedy, NY was represented, as well as many other locals.

As the larger out-of-town groups arrived at the auditorium, they were announced by the master of ceremonies, UE’s Political Action Director Chris Townsend, and each marched into the hall behind their local union banner. Each delegation was greeted by loud cheers and applause of Erie GE workers, augmented by makeshift drums and hundreds of small but highly-effective plastic horns that have become the newest instrument added to workplace “band practice” in the Erie plant. One member, Adam Tate, added notes from a real horn – his trombone – to the sounds of solidarity. (The next morning Brother Tate and his horn were the focal point of a photo on the local page of Erie’s Sunday newspaper, above the headline, “Labor united.”)

The first local to march into the auditorium and to an enthusiastic welcome was IUE-CWA Local 161 from Salem, Virginia. One of the last to enter was the big delegation from IUE-CWA Local 201 from Lynn, Mass., which receieved a resounding reception from the thousands of members already assembled.

A few minutes before the rally was scheduled to start, “rolling thunder” arrived at the rally site, as more than 150 motorcycles roared down Peach Street. The riders were UE Local 506 members who had gathered at the union hall and formed a convoy to the to Hammermill Center – another way workers have found to demonstrate their solidarity and determination.

The first speaker – Local 506 President Roger Zaczyk – explained why Local 506 had chosen the badger as the symbol of the union side in these negotiations, and included the image of a badger on buttons and posters. They were inspired by the fighting spirit shown by workers in the otherwise quiet state of Wisconsin, and their state animal, the badger, “pound for pound the most fearless and ferocious animal in North America.” He urged members to “awaken your badger spirit and turn it loose.”

Wayne Burnett, Local 506 business agent, said he was very glad to see so many in attendance, because “the world was supposed to end two weeks ago, and we wouldn’t be here.” But unlike the “false prophet” who predicted the end of the world, Burnett continued, “the profit I’m talking about is real – the profit this company makes.” He reminded the members in the auditorium that they “helped make that profit and deserve to be part of it. We’re not asking GE for the keys to the locomotive, but we want to be on it when it rolls.”

Like many other speakers, Local 618 President Mary Stewart-Flowers called attention to the retirees seated in the front rows, who are fighting for a pension increase. “We hope we can fill the shoes left to us by the retirees. Together we can win.” She then led the crowd in a call-and-response: “What do you want? Decent contract. When do you want it? Now.”

“This is a three-generation attack,” declared Ric Cassili, business agent of IUE-CWA Local 201 at the Lynn GE plant. “They are not leaving anyone out – no one will be spared – retirees, current workers, and future employees.” 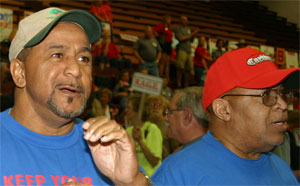 Cassili deconstructed some of the company’s rhetoric and buzzwords. “They use the phrase ‘reset the economy.’ That means reset our wages, reset our pensions, reset our benefits. They made $14 billion and didn’t pay any taxes last year. Their executives aren’t getting ‘reset’ on benefits – just us.”

“They talk about ‘economic trends’ in this country. They caused those trends when they started moving jobs out of here in the ‘80s and tore apart the industrial base.” Cassili called on union members to respond in kind to the company’s three-generation attack, and concluded by leading the crowd in a chant: “Old, middle-aged and young, together!”

A group of some 25 UE Young Activists, representing UE locals from Iowa to North Carolina, had come to Erie to assist with the rally, and they were called to the stage. Antwon Gibson, vice president of Local 610 near Pittsburgh, spoke for the group and then led a chant of “We are one.”

Tom O’Heron, director of collective bargaining for the International Association of Machinists (IAM), reminded members that “this company’s still making billions of dollars, so don’t join GE in the race to the bottom.” Like a skilled boxer, we need to counter GE’s blows and land some punches of our own. 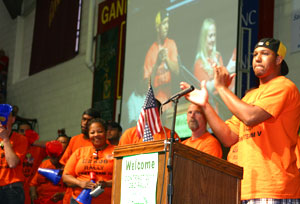 UE Eastern Region President Andrew Dinkelaker said he needed to “up the ante” on Wayne Burnett’s invoking of 10 million voices. He said UE has received, in recent days, letters from unions and labor federations in 12 countries representing 40 million workers, expressing their solidarity with all of the CBC unions in their fight with GE. Dinkelaker then showed a video he had prepared that connected the current negotiations with past struggles of GE workers, including the 1946 national strike. The video also showed many of the international labor support letters, and featured a clip of Brazilian GE workers telling the company “Hands Off our brothers and sisters in the U.S.”

Bob Santamoor, chairman of the IUE-CWA’s GE Conference Board, reminded members of the 1969 national GE strike in which the UE, IUE and other unions joined forces, solidified the CBC, and defeated Boulwarism, GE’s policy of “take-it-or-leave-it” bargaining. This year Boulwarism is back, he said, “the take-it-or-leave it attitude, and I’m here to tell you, if it continues the way it’s going, we’re going to leave it.”

Santamoor said the company has just two weeks “to understand our proposals. We’re not going to pay exhorbitant costs for healthcare, and they better do something that makes sense. We’re united – UE, IUE, CBC.” 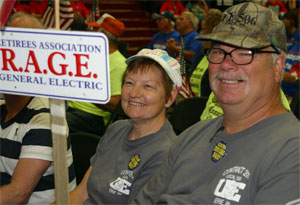 “GE likes to talk about ‘legacy’, as in ‘legacy costs,” said Steve Tormey, secretary of the UE-GE Conference Board and leading negotiator for UE. The union views its retirees as part of its ‘legacy,’ he said, adding, “It’s appropriate that our retirees are sitting front and center, where they belong.”

Picking up on the video’s historic footage, Tormey talked about the epic 1946 GE strike. This year is the 65th anniversary of that national strike by UE, which was part of an even larger strike offensive by the CIO, to recover what workers had lost during the national wage freeze during the war. At the height of the 1946 CIO strikes, one-half million workers were on strike – “auto workers, steelworkers, electrical workers and more.” On the eve of the walkout, said Tormey, UE’s national officers were summoned to the Midtown Manhattan office of Charles E. Wilson, CEO of GE. “The CIO demand was $2 a day – 25 cents a hour. Mr. Wilson said, ‘Ten cents an hour, boys, that’s it. Take it or leave it.’” Tormey continued, “And in 1946, our late great UE Secretary-Treasurer Julius Emspak said, ‘In that case, Mr. Wilson, we’ll just have to leave it.’”

At the end, the CIO unions got hourly raises of 18 ½ cents. “In percentage terms, it was then and remains the largest wage increase in the history of General Electric. That’s part of our legacy.”

Faced in the current negotiations with the company’s wide-ranging attack on the pension, health insurance, wages, and SERO (Special Early Retirement Option), Tormey said he has been asking himself whether the current generation of GE workers, “if necessary and if they (GE) force it on us, not because we want it, are prepared to stand up. Well, we got our answer today. I not only think we can stand up, but looking at this crowd and being here today, I know we can stand up.”

3,500 turn out for GE union's rally in downtown Erie(GoErie.com)

Jim Clark, national president of the IUE-CWA and chairman of the CBC, echoed Tormey’s sentiments. “GE has ways to see what goes on at these rallies, and they’ve got to know, with the crowd we’ve got here today, that we’re ready to fight.” The fact that members of his union from as far away as Louisville and Lynn spend many hours on buses traveling to and from the rally demonstrates real commitment. “It’s not like people have nothing better to do on a weekend than to take a long bus ride to a rally.” Clark expressed the determination of the CBC to achieve a decent contract. “We’re going to stick together and take it to them.”

The final speaker was UE President John Hovis, who has now led the UE bargaining team in nine rounds of GE contract negotiations. “This company has the audacity to brag, when they ought to be hanging their heads in shame, at what they’ve done to their salaried workers over the past couple of years,” said Hovis. “If they think we’re going to eat the same thing without a fightback – they keep talking about ‘volatility.’ Steve Tormey and I are sick of hearing the word ‘volatility.’ If they don’t get some of that stuff off the table, they’re going to learn what volatility is all about!”

A color guard from American Legion Post 105 in nearby Northeast, PA presented the colors, and a UAW video of the national anthem was played. The invocation was delivered by Bishop Clifton McNair III of the Word of Life Christian Center in Erie. Joel Schwartz, a member of Erie City Council and Kyle Foust of Erie County Council presented proclamations adopted by each of those local legislative bodies, recognizing UE Local 506’s contribututions to the economic health of the community, and urging good faith negotiations for a fair contract. “As long as GE wants to say that it is committed to this community,” said Foust, “you deserve and this community deserves to see that in writing in this contract negotiations.”

The speeches were punctuated by musical performances by a duo of Local 506 members – Joe Lapaglia and Rick Magee – on guitar. Their selections fit the occasion well – Merle Haggard’s “Working Man Blues” and Creedence Clearwater Revival’s “Fortunate Son” – and they ended the rally with labor’s anthem, “Solidarity Forever.”