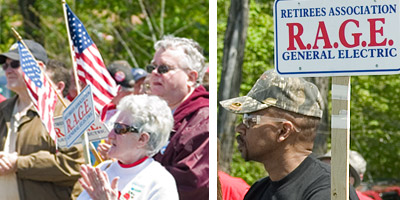 Members of the UE Local 506 Retirees' Association (RAGE) demonstrate outside of GE's Erie plant, calling for a badly-needed pension increase and to demand the company not follow in the pension-destroying footsteps of other big corporations.

A spirited rally by some 250 Erie GE retirees and Local 506 and 618 stewards sent a strong message to the company: Workers and retirees are united in demanding a pension increase for retirees — and in saying “no” to attempts to undermine healthcare and the pension for future, current, or past GE workers. The event received extensive coverage by the Erie news media.

The rally was organized by the Erie retirees group RAGE – the Retirees Association of General Electric – and supported by UE Locals 506 and 618, which respectively represent the hourly production and maintenance and salaried clerical bargaining units in the Erie plant.

A large crowd of retirees gathered in a lot across the street from the Erie plant’s East Gate, and were joined at noon by more than 100 shop stewards who marched out of the plant en masse. The marching stewards made both an impressive site – all clad in red union T-shirts – and an impressive sound as many of them blew on “quackers” – small noisemakers that sound like a duck call and are used by members to demonstrate union spirit in the plant.

The rally was chaired by Ron Flowers, RAGE president, who reminded participants that GE has not given retirees a raise in over three years, even though the GE pension trust fund is huge and in solid financial condition, and that GE retirees have earned the right to a decent retirement.

“The retirees made GE what it is today,” he said. “In the 1970s and ‘80s, we made GE number one in the locomotive business,” after its many years stuck in the number two spot. “During all that time, I never saw Jack Welch in Building 10 with a wrench in his hand. I never saw Jeff Immelt in Building 6 getting his hands dirty. We did it.”

‘THAT IS JUST WRONG’

‘ ... the bottom 25 percent of the American population is poorer than they were 25 years ago. That is just wrong ...’

Flowers quoted from a speech by GE Chairman and CEO Jeff Immelt at West Point in 2009. Immelt criticized much of the “business leadership, and maybe leadership in general” in the U.S. The GE chief executive said: “Tough-mindedness, a good trait, was replaced by meanness and greed – both terrible traits. Rewards became perverted. The richest people made the most mistakes with the least accountability. In too many situations, leaders divided us instead of bringing us together. As a result, the bottom 25 percent of the American population is poorer than they were 25 years ago. That is just wrong.”

Mr. Immelt should heed his own words, Flowers said, because GE’s policies are threatening to push its own retirees “closer to that 25 percent,” and to leave GE workers worse off than those who came before them.

‘Mr. Immelt should heed his own words ... because GE's policies are pushing its own retirees “closer to that 25 percent”’ ...

Flowers reported that, representing RAGE, he attended the GE stockholders meeting in April in Salt Lake City. The company had reported that it was looking to invest $100 billion. When Flowers took the floor, he said, “I told Immelt, ‘Invest in the people who built your company.’”

For years, said Flowers, GE has hidden behind court rulings that companies are not required to bargain on behalf of retirees with the union that represents workers on the job. The company can voluntarily agree to bargain with the union for retirees, as other companies have, but GE refuses to do so. “But we’ve fought this company for 50 years, and we’ll continue to fight for the retirees just as we fight for the workers in the plants,” said Flowers.

“GE’s attack on healthcare affects us all – retirees and current workers,” said Roger Zaczyk, Local 506 president, speaking at the rally. He also supported the retirees’ call for COLA on pensions, and said the union would be fighting to make sure the COLA on wages “still has some carbonation.” He invited all the retirees to participate in the big contract rally on June 4.

Local 618 president Mary Stewart-Flowers, also emphasized the common interests of retirees and current workers. “We all hope to join you” in the retirement that together we’ve worked for and fought for, she said.

UE Eastern Region President Andrew Dinkelaker brought greetings from UE locals stretching from North Carolina to Ohio. “It’s a shame that they’re attempting to take back what we’ve earned,” he said, and he pledged the backing of UE members across the region.

WE STAND ON YOUR SHOULDERS

“We are standing on your shoulders,” Steve Tormey told the assembled retirees, praising the efforts of the retirees and earlier generations of GE workers who fought for the wages, benefits and working conditions UE members enjoy today. Tormey, secretary of the UE-GE Conference Board, added, “We have a responsibility to the generation after us, in the same way.”

‘We don’t have to respond. You don’t represent retirees.’ — GE

In March, UE President John Hovis wrote a letter to GE requesting an adjustment in the pensions of retirees. He pointed out that, since the last pension increase in December 2007, consumer prices have risen by more than 5 percent, and necessities like food, gasoline, home heating and medical care have increased even more. While in past years GE has replied to similar letters from the union with perfunctory assurances to look into the situation, this year the company’s response was curt and blunt, Tormey said. “‘We don’t have to respond. You don’t represent retirees.’”

The GE pension trust fund this year reached its 99th birthday, said Tormey. Yet as of January 1, 2011, newly-hired GE salaried exempt employees cannot participate in the pension plan. If GE manages to impose the same condition on newly-hired hourly workers, Tormey warned, “it is the death knell for the GE pension plan. We must not let that happen.”

This year also marks the 24th year that GE has not contributed a single dime to the pension plan, Tormey said, because the plan is so well funded and grows from its own investments. Yet GE wants to deny future workers participation in this plan. But the company shows no such concern about its other pension plan – the “supplemental” plan that provides a second pension to 3,200 of GE’s highest-paid managers and executives.

That special fund for GE high-rollers – unlike the regular pension plan – is actually underfunded and therefore a financial liability to the company. The supplemental plan is underfunded to the tune of $1.38 million per participant, Tormey said, yet the company shows no inclination to cut this benefit.

The rally ended in a spirit of unity between RAGE members and working UE members in the continuing fight for justice for retirees and a decent GE contract for present and future workers.