Greetings Fellow Workers! Welcome to the first electronic edition of The Electric Eggplant, and the latest news from your Bargaining Team. The 1186 negotiators sat down Tuesday, the 29th of October, for another round of discussion over our forthcoming contract. As usual, management and their consultant were met with an informed, well prepared, united, and determined panel of fellow workers from across the co-op. We reached tentative agreement on three more key issues:

Further progress was made on two important topics: Health and Safety, and Union Activity. Progress, maybe, but it is not enough. It is undeniable that the workers of the Willy Street Co-op must have a role in ensuring that our workplace is safe, and does not cause us to be unhealthy, unhappy, or made less in any way. Furthermore, management must recognize the fact of the matter and accept that we have, by a huge margin, decided to organize as workers, and thus they must make concessions that allow us to further and maintain our organization, and optimize our opportunities to grow and contribute to the wider labor movement. The details:

Unfortunately, management and their representative have been reluctant to address our reasonable proposals on leaves of absence (much of the language of which, incidentally, comes right from management’s own handbook), and on voluntary deduction of union dues from payroll. As has been said before: these are important issues, and management cannot continue to put them off.

Temporary Grievance Procedure In Effect For All Grievances

We now have a temporary grievance procedure in place for all grievances (disciplinary and non-disciplinary). If you are concerned that your rights have been violated or you believe something unfair has happened, talk to your Steward immediately. They will investigate and help you file a grievance. You have 14 days from the date the event happened to file a grievance. Never forget your Weingarten Rights! Weingarten rights guarantee an employee the right to Union representation during an investigatory interview. These rights, established by the Supreme Court, must be claimed by the employee. The boss has no obligation to inform an employee that they are entitled to Union representation, so you must be proactive, speak up, and use the voice that Unions have fought for you to have!

In other news, the OSK will NOT be made to work on Thanksgiving! While the retail sites are only open until 2, the OSK was told they would be working a full day, and the site would be open from 6am until 8pm for full production. Not only is this a departure from prior practice of folks volunteering to work for a short day, but as recently as 4 days before the announcement the site director said the kitchen would be closed. The wheels were put in motion immediately to pursue the matter via petition, labor action, whatever it would take, but management was made to see the light, and relented at the bargaining table just days after their announcement!

Also at the OSK, the issue of requiring some employees to work both Saturday and Sunday in order to receive a deserved promotion remains an open issue. Again, this is a clear deviation from past practice, and seems a counterintuitive move at a location that has been struggling with low morale and high turnover. Fortunately, with the rise of our union, so too rises the fortunes of OSK workers, who are now armed with the power of solidarity, shielded by the law, and backed by our 35,000 plus fellow UE organized workers!

In the retail sites, however, there is a fight to be won. There is a major disagreement with management concerning employee schedules. First, we discussed the recent change in attendance policy enforcement, in which workers must not leave more than ten minutes early or they will receive a disciplinary point. In the past we have been told on multiple occasions, verbally and in writing, that this change would not occur. In fact, one of our negotiators read aloud from an email sent BY ANYA HERSELF stating that the status quo would remain. Friends, I wish you could all have been there to see the looks on the faces of certain members of the management team when those words were read. This clearly ruffled the feathers of the lead management negotiator, who promised to address the issue in our next meeting. The second offense by management as related to our schedules involves a unilateral change to the way in which those workers who are assigned to close are scheduled. Management seemingly fails to comprehend that ALL policies are to have been frozen as of our victory at the polls, not changed week to week, site by site, or day to day depending on the will or whim of management! When management wonders why we organized, why we chose the UE, and why WE ARE 1186, you can tell them just what they told us when the punitive and dangerous attendance policy was first proposed: you asked for this.

We must hold management’s feet to the fire: please sign the petition that is circulating on these issues! If we cannot help management to see the error of their ways, and educate them on the the folly of defying the workers united, we will need to show them in no uncertain terms that we won’t allow them to violate our rights.

On October 30th, over 50 supporters crammed into Harmony Bar & Grill to hear Sara Andrews (North), Angelica Engel (East), and David Droster (West) speak about the lessons learned from our historic organizing victory. Frank Emspak, son of UE's first national secretary-treasurer Julius Emspak and former elected officer of UE local 271 himself, opened the public event by recounting UE's proud history of member-led working-class struggle and political independence. Isthmus reporter Alice Herman moderated the discussion as Sara, Angelica, and David described the reasons for, and mechanics of, the organizing campaign, and provided a bargaining update. Audience members, many of them Willy Street Co-op owners, asked how they can support us as we fight to win a solid first contract and signed up to join the member-owners solidarity committee. The event was organized by our friends at Madison Area Democratic Socialists of America. 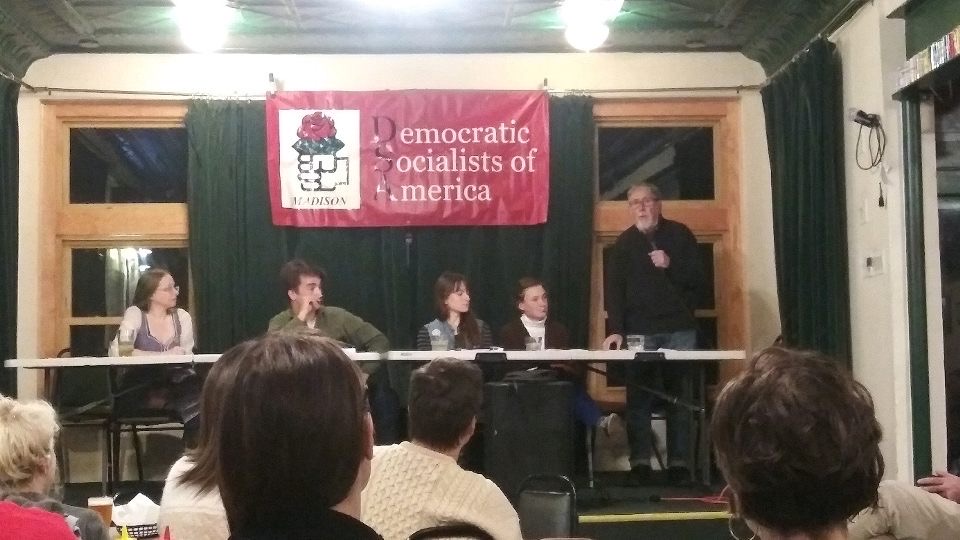 Wednesday night at the Harmony was a great event! The support, solidarity and camaraderie from fellow workers, member/owners, and the Madison DSA made for high spirits and warmed us all on a cold and snowy evening.

Thanks for reading! Solidarity forever!