The Fight to Raise the Minimum Wage 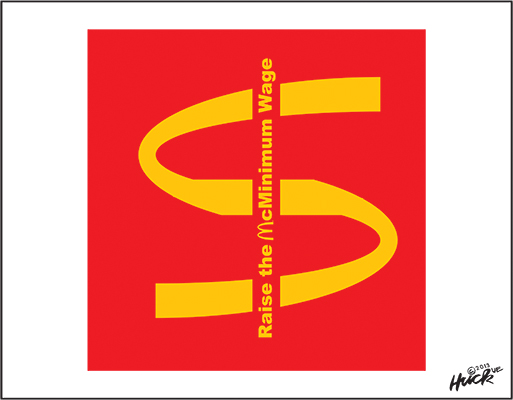 The federal minimum wage, a minimal protection against exploitation that’s meant to keep working Americans out of extreme poverty, has not been increased since July 2009. If the minimum wage had kept up with inflation over the past 40 years, it would now be $10.86 rather than $7.25. The minimum wage for tipped workers is only $2.13 and hasn’t been increased in 23 years.

The minimum wage came into existence with the passage of the Fair Labor Standards Act in 1938. This was the same law that established the 40-hour workweek and the right to overtime pay for hours above that. These reforms were part of the New Deal legislation under the administration of President Franklin D. Roosevelt. But neither the minimum wage nor the 40-hour week came about because of the generosity of Roosevelt or any other politician. They were the results of mass union organizing and strikes by workers in the 1930s, and decades of labor struggles that came earlier.

Raising the minimum wage is an economic stimulus and an anti-poverty program that is not paid for through taxes. Rather, it requires private employers to pay wages that are closer to what people need to live.

Not raising the minimum wage does increase costs to taxpayers because it leaves workers dependent on various forms of public assistance to keep their heads above water and meet basic needs. Walmart is the largest U.S. employer, with 1.3 million employees here. Walmart pays sales associates $8.86 an hour. This low-wage business plan cost taxpayers $6.2 billion in public assistance to Walmart workers, including food stamps, Medicaid and subsidized housing.

In the fast food industry, 52 percent of employees’ families are enrolled in one or more public assistance programs compared with 25 percent of the workforce as a whole.  Low wages in this industry cost taxpayers about $7 billion a year.

A 2013 study by the Center for Economic and Policy Research (CEPR) concluded that if the federal minimum wage had kept up with not only inflation but also with increases in worker productivity, it would be at least $21.72 an hour.

The minimum wage is higher than $7.25 in 20 states that mandate higher minimums by state law. Some cities and counties have higher minimum wages than what their state requires. The organizations of low-wage workers have mobilized to for higher state and city minimum wages. On June 2, the city council of Seattle approved a minimum wage of $15, to be phased in over the next seven years. Republicans and corporate lobbying groups such as the American Legislative Exchange Council (ALEC), who appear committed to keeping as many working Americans in poverty as possible, oppose state and local minimum wage increases. In April the Republicans who control Oklahoma’s state government made it illegal for any city to raise the minimum wage or to mandate sick days for workers. (The fight for sick days for restaurant employees has particular public appeal. Not many people want their meal prepared or served by someone who came to work with an infectious disease because the employer won’t provide sick days.)

President Franklin Roosevelt in the 1930s forcefully made the case for requiring employers to pay wages that their workers can live on. “No business which depends for existence on paying less than living wages to its workers has any right to continue in this country,” he said.