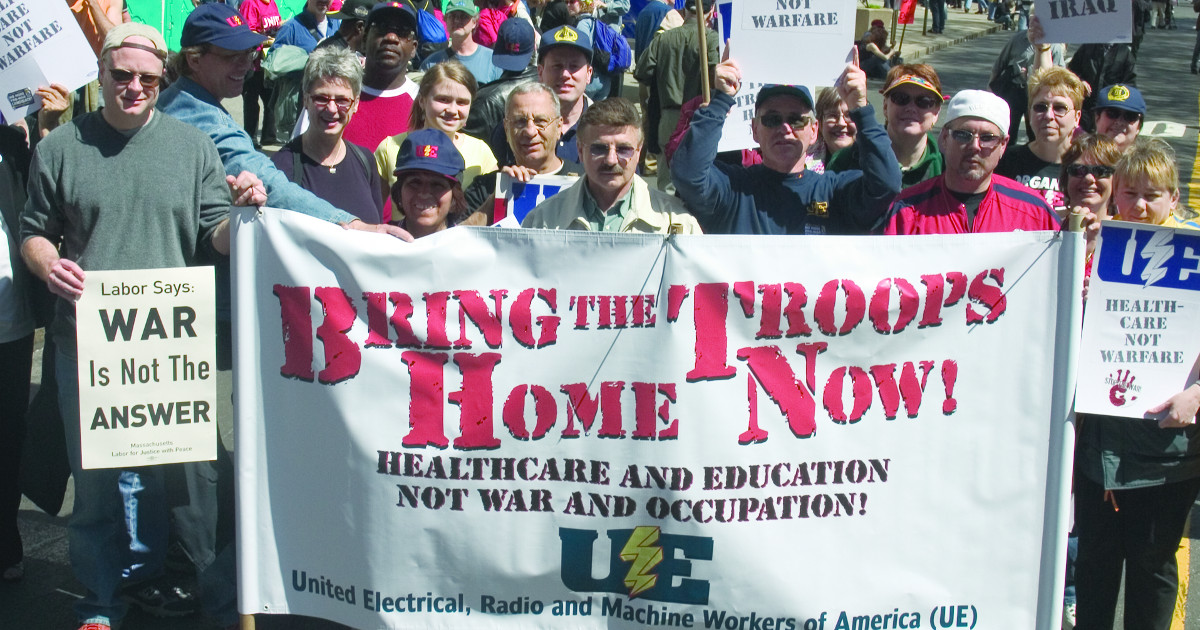 It has been decades since a major U.S. politician has put forward a foreign policy vision that aligns with UE’s long-standing belief that foreign and military policies should defend the interests of working people, not the wealthy.

Probably unsurprisingly, it was Senator Bernie Sanders (I-VT), a long-time friend of UE and political independent, who broke that silence in a speech at Westminster College last week. As journalist Sarah Jones noted in a recent article about the Sanders speech, “foreign policy is in fact one of the few areas of common ground between Democrats and Republicans” — a common ground that rarely if ever benefits working people.

“UE has always supported a foreign policy based on labor solidarity and diplomacy,” said UE General President Peter Knowlton. “We especially welcome Senator Sanders’ insistence that our country must seek to build stronger relationships between people at the grassroots level, and his drawing attention to the fact that inequality, corruption and authoritarianism are part of a single system that oppresses and exploits workers across the globe.”

In his speech, Sanders proposed a broad understanding of foreign policy: that it encompasses the military policy that had led to the deaths of thousands of Americans and hundreds of thousands of Iraqis and Afghanis, but also the budget priorities of those who propose to increase the military budget while throwing tens of millions of Americans off their healthcare. Foreign policy, he said, must also “take into account the outrageous income and wealth inequality that exists globally and in our own country,” and facilitate the U.S. working with the international community to address climate change.

He suggested that a loss of faith in democracy is at the root of our current foreign policy troubles. “At the very top of our list of concerns is the need to revitalize American democracy to ensure that governmental decisions reflect the interests of a majority of our people, and not just the few – whether that few is Wall Street, the military industrial complex, or the fossil fuel industry.” Workers in the U.S. and around the globe, he said, “are working longer hours for lower wages than they used to. They see big money buying elections, and they see a political and economic elite growing wealthier, even as their own children’s future grows dimmer.”

Sanders declared that foreign policy must offer people in the U.S. and around the world a vision of democracy and justice, and that must include both unequivocal condemnation of white supremacy and reform of the police and criminal justice systems.

“Our job is to build on that common humanity and do everything that we can to oppose all of the forces, whether unaccountable government power or unaccountable corporate power, who try to divide us up and set us against each other.”

Sanders’ approach to foreign policy closely echoes the vision of a pro-worker foreign policy that UE has always endorsed. UE was the first union to oppose the Vietnam War, in 1964, and Bush’s disastrous war in Iraq, in September of 2002. Current UE policy, “For Jobs, Peace and a Pro-Worker Foreign Policy,” passed by delegates to the 75th UE Convention this past August, calls for reducing the military budget; redirecting the savings to transportation, housing, healthcare, education, renewable resource development, and other peaceful infrastructure; and changing U.S. foreign policy to promote diplomacy, democracy, and workers’ rights.