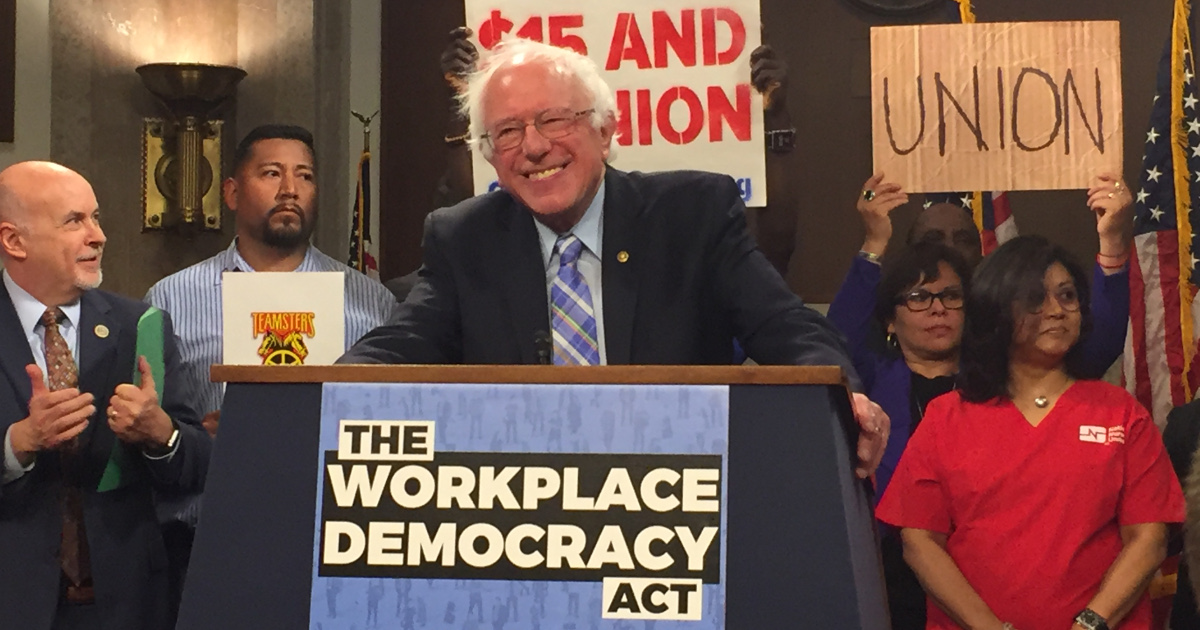 On Wednesday, May 9th, Senator Bernard Sanders (I-VT) introduced the Workplace Democracy Act, a bill that would restore workers’ rights to organize and bargain for better wages, benefits and working conditions.

“We applaud Senator Sanders and Congressman Pocan for filing the Workplace Democracy Act legislation,” said UE General President Peter Knowlton, who attended the press conference announcing the legislation. “Workers’ rights are core values of any democracy. Providing strong uncompromising legal protection for workers to organize, gain a collective bargaining agreement, and resolve conflicts with their employer are fundamental. This legislation will provide workers with stronger legal protections to exercise their basic first amendment rights: to speak, assemble, and to organize.”

This kind of bold labor law reform has long been a priority for UE. As UE members noted in the policy resolution “Labor Law Reform”:

The Bill of Rights has never been applied in the workplace, where employers are empowered to maintain near-absolute control. With our constitutional rights shredded by our employers, our modern day rights to organize into unions are also ignored by bosses. Our freedom to be protected from unreasonable searches and seizures ends at the gate or front door. Our freedoms of speech and assembly are virtually nonexistent while at work — unless you have a union….

No significant progress has been made on the labor rights front in decades, and today employers brazenly violate the law and victimize working people who dare to challenge their complete control by attempting to unionize.

The Workplace Democracy Act would:

This bill is an updated version of a bill Sanders introduced in the 90s, while serving in the House of Representatives, which was a major political action priority for UE. In a letter sent to UE locals and staff encouraging them to take action in support of that legislation, then-Secretary-Treasurer Bob Clark noted that:

Although the Workplace Democracy Act will be prevented from coming to the floor of this Congress by Newt Gingrich and his anti-labor majority, it is still important that we work to build support for this legislation. Our future as a union, and our future as a labor movement, depend on our ability to — sooner or later — win the kind of real labor law reform that this bill contains. We must educate our membership, our members of Congress, and others in the labor movement about the contents of this bill, and why it is so important for them to help publicize and support it.

When someone asks us what labor needs in order to restore our right to organize and bargain, the answer is simple. Pass the Workplace Democracy Act. Any member of Congress who expects working people to support them should co-sponsor and support this bill instantly. A refusal to do so will speak for itself. Let’s get busy.

The same holds true today. Stay tuned to ueunion.org or sign up for the UE ActionNet for online and offline tools to help build support for this important legislation.