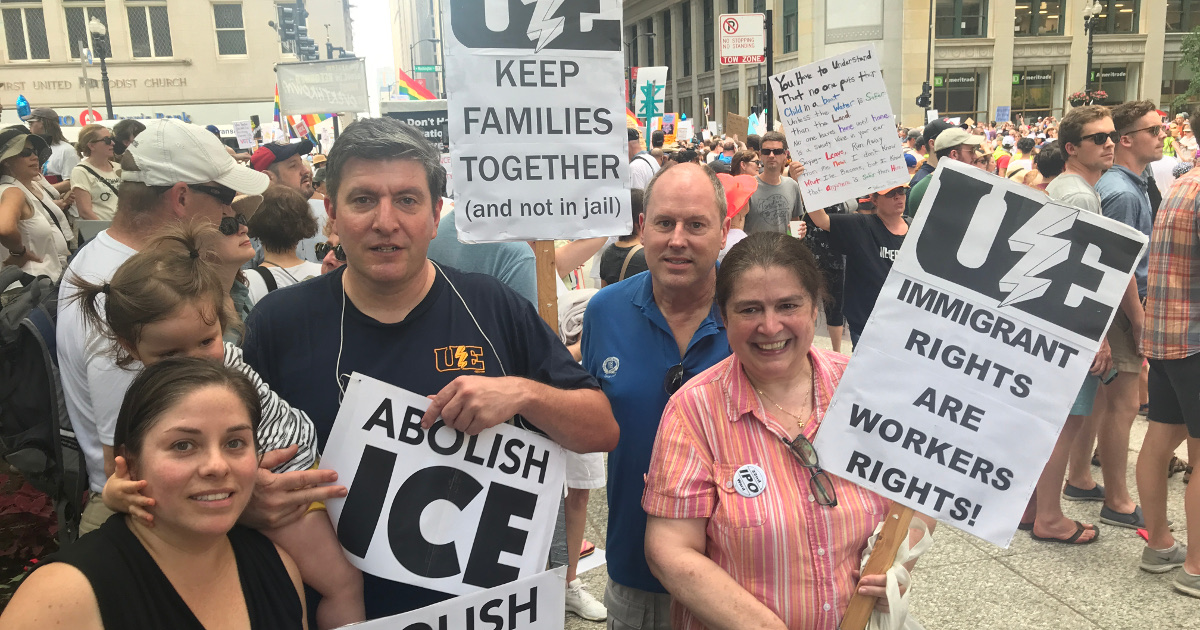 UE joined tens of thousands of people at the “Keep Families Together” pro-immigration rally in Chicago on June 30
August 24, 2018
Pittsburgh

UE's General Executive Board adopted the following statement on August 24, 2018

In 2003 the Bush administration took advantage of the climate of fear caused by the September 11 terror attacks to double down on attacks on immigrants. The Bush administration created the Department of Homeland Security and its Immigration Customs Enforcement (ICE) department to replace the functions and purpose of the Immigration and Naturalization Service (INS). Instead of a service to support and manage immigration, ICE has become a military force that criminalizes immigrants and asylum seekers.

The criminalization and imprisonment of adults and their children, human beings fleeing repression and slaughter, has no place in a democracy. It is an immoral response to migration that is the result of the U.S. corporate and military interventions in other countries, carried out to repress worker and trade union rights and democracy and increase profits for U.S. corporations.

In the 15 years since its creation, ICE has systematically engaged in crimes against humanity, including separating thousands of children from their parents. Families have been broken up. The practices of ICE, now amplified publicly by the racist rhetoric of the Trump administration, have turned our nation from a friend of immigrants to one that persecutes  and locks them up — even those seeking asylum from persecution, an internationally recognized human right.

In recent months, there has been an outpouring of support for a more humane immigration policy and a complete denouncement of the present policies being pursued by the U.S. government and the Trump administration. Hundreds of thousands of people in the U.S. and Canada, including UE members and tens of thousands of other trade unionists, have taken to the streets to protest the continuing incarceration of immigrant families, adults, and children seeking refuge from terror and poverty.

The wave of migrants from Mexico who have left their homes and their families to come to the U.S. in the last 25 years has everything to do with trade policy. The North American Free Trade Agreement (NAFTA) dislocated millions of Mexican farmers and their families by destroying family farms and local industry and forcing people into low-wage industrial centers making products for U.S. corporations. We applaud and salute the Mexican people for electing Andrés Manuel López Obrador to the Presidency. Obrador’s focus on rooting out government corruption, supporting workers’ rights, and lifting up the rights of the most marginalized in society is a welcome change. His vision for trade suggests that he will push for improvements that will benefit unions, workers, and our communities in both the U.S., Mexico, and Canada.

The recent influx of migrants from Guatemala, Honduras, and El Salvador is due in no small measure to the meddling of U.S. corporations, and the U.S. government and military, in the internal politics of those countries, including support for forces that brutally repress unions, the poor, peasants, and farmers. For an example, we need to look no further back than 2009, when the U.S. government supported a right-wing pro-business coup against the democratically-elected president of Honduras, Manuel Zelaya. Zelaya’s offense was significantly raising Honduras’s minimum wage. The right-wing government that replaced him has systematically repressed unions and social movements, often through violent means. U.S. corporations, and the U.S. government and military, have similar histories in Guatemala and El Salvador.

According to the UN High Commission on refugees, the number of asylum seekers and refugees from these countries increased from about 18,000 in 2011 to 294,000 in 2017. Yet when refugees from this violence comes to our border seeking asylum, they are treated not as a victims but as criminals.

The Trump administration has, as well, set up a programmatic and coordinated effort to revoke the citizenship (denaturalize) some immigrants who have become US citizens so they can be deported. The last time the federal government tried to do this was during the right wing McCarthy era, when there was an all-out assault on militant democratic unions, including the UE and the the International Longshore Workers Union (ILWU). The US government spent years attempting to strip the citizenship of two of the most significant and important labor leaders - Harry Bridges, President of the ILWU, and UE’s Director of Organization James Matles. The government failed in both efforts as UE, ILWU, and allies successfully defended our leaders and our unions from attacks by government, big business, and those in the labor movement who were working with the employers in an attempt to destroy us.

UE policy, passed by delegates to our 75th Convention last August, calls for “an end to mass incarceration.” The militarization of immigration policy, begun when ICE was established, has resulted in mass incarceration of immigrants, including children, in detention centers reminiscent of concentration camps. Therefore, we join the call made by immigrant rights groups and others to abolish ICE and replace it with a demilitarized immigration agency supportive of people’s civil, human, and asylum rights free from repression and persecution.

The “Families Belong Together” demonstrations and marches, along with the blockading of ICE detention facilities, are welcome responses to the militarized repression of immigrants. Inhumane policies by our government deserve particularly bold actions and we applaud those mobilizing the American people to resist these attacks and to instead change the focus of immigration policy from criminality to humanity. We encourage UE members and locals to get involved in this human rights movement.

Workers are fighting for and winning Personal Protective Equipment, additional sick leave, hazard pay or some cases forcing their employers to temporarily suspend work until it is safe to return. This is the fight of our lives.