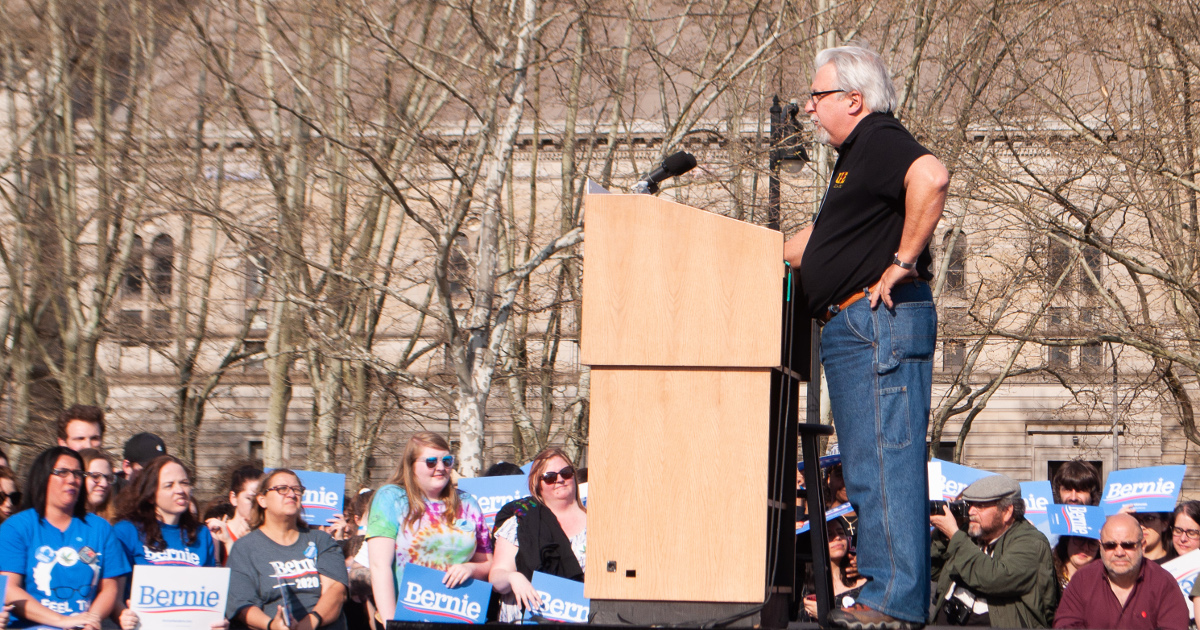 When Bernie Sanders made a campaign stop in Pittsburgh on Sunday, April 14, all three of the local speakers on his program were from labor, and the last of them was from UE.

Retired UE NEWS Editor Al Hart warmed up the crowd by reminding them that Sanders doesn’t just talk about being a supporter of labor, he has a long history of supporting UE and other union members:

Al Hart of @ueunion "Bernie Sanders has supported our locals in Vermont in every struggle they've been involved in, whether political, collective bargaining, or to organize, since the 1980s when he was Mayor of Burlington." #BernieInPittsburgh pic.twitter.com/p0ltKs09Gz

Hart, a member of UE Local 506 who worked at the GE plant in Erie from 1973 to 1986, also noted that Sanders had “made a strike in little old Erie, Pennsylvania into a national issue.”

First, Hart said, “we cannot save decent health insurance at the bargaining table. We’re losing ground every time we negotiate a contract. We need single-payer, Medicare for All healthcare and nobody has fought harder for that than Bernie Sanders.”

Second, Hart noted that the right to organize “is almost non-existent in this country,” and “Bernie has been in the forefront of the fight pushing legislation … to restore the right to join a union.”

Third, Hart pointed out that “the other right that we’ve lost is the right to retire in dignity and in comfort.” Sanders supports UE policies such as expanding Social Security into a “single-payer” source of adequate retirement income for all workers.

“I’ve never seen a candidate like [Sanders] in my lifetime, for president, that is more pro-working-class,” Hart concluded. To cheers from the audience, he declared, “I believe that Bernie can win in 2020 and that he will win.”

Illustrating Hart’s point about Sanders’ commitment to supporting workers trying to organize a union, the other two locals speakers at the rally were a University of Pittsburgh graduate employee and a UPMC hospital worker, both of them representing groups of workers who are currently organizing.

The stop in Pittsburgh was part of a tour of Pennsylvania, Ohio, Michigan and Wisconsin that Sanders undertook to highlight the issues facing working people in the rust belt. At the rally, Sanders denounced the corporate trade deals that have made it easy for companies to ship jobs to Mexico and other low-wage countries. He noted that Trump won all four states on the tour in 2016, in part because he promised to substantially reduce the trade deficit and prevent the outsourcing of jobs, but that during the Trump presidency there has been a $120 billion increase in the trade deficit and 185,000 jobs have been shipped abroad.

Hart’s speech (and the rest of the event) is available on YouTube at https://youtu.be/u744LcdP_wY?t=508

UE’s three geographic regions and many locals, including Local 506, endorsed Sanders in 2016 after membership discussion and debate. UE has not made an endorsement in the current presidential race.