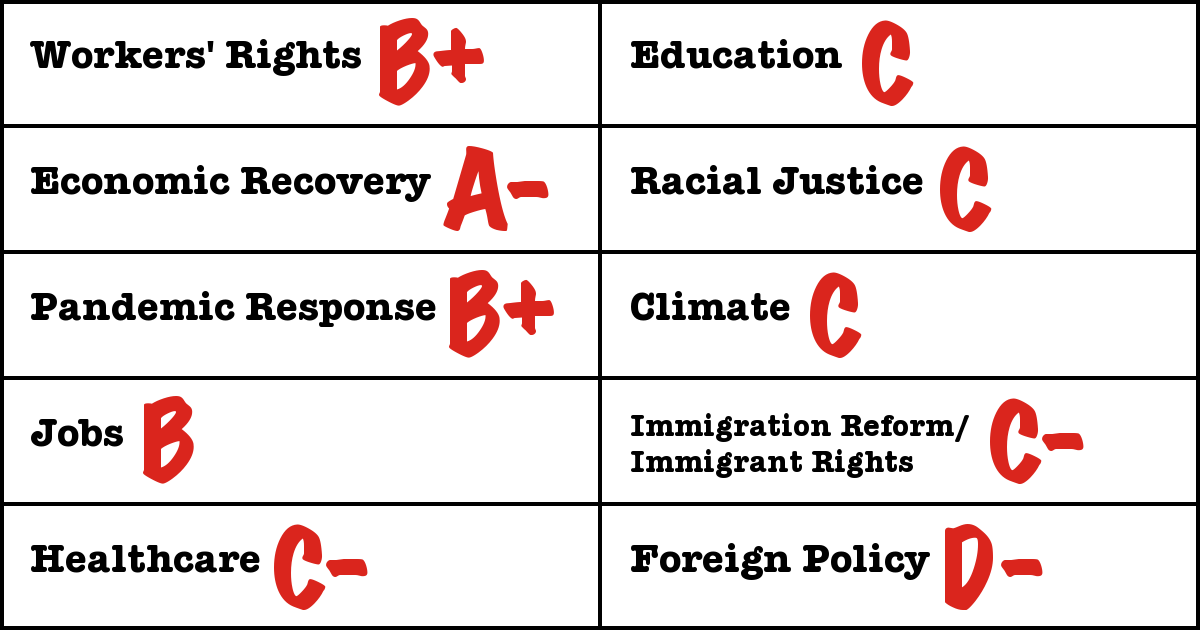 NOTE: The version of this report card published in the Spring 2021 issue of the UE NEWS adjusted Biden’s grade on “Pandemic Response” downward to a straight B because the new OSHA rules on COVID-19 (which were not issued until June) only applied to workers in healthcare settings. It also noted that it remains to be seen whether he will stick to his campaign pledges as Congress prepares an infrastructure bill, or whether he will make the same mistake Obama made: watering down his proposals in the vain hope of achieving a “bipartisan” bill from Republican politicians who have no interest in bipartisanship.

April 30 marked the end of the first 100 days of the Biden administration. The phrase “first 100 days” was coined by President Franklin Delano Roosevelt in 1933, in a radio address in which he assessed his administration’s first actions to tackle the Great Depression and establish the New Deal.

The challenges faced by our nation today are no less than those we faced in 1933. Our economic problems are intertwined with the existential threat of climate change and the social crisis of a nation divided by race, immigration status, and cultural beliefs.

During the 1930s, aggressive struggle by working people shaped the New Deal as much, if not more, than the president did. Most notably, millions of workers built the industrial unions of the CIO, including UE, which was founded in 1936, with the goal of “unit[ing] all workers on an industrial basis, and rank-and-file control, regardless of craft, age, sex, nationality, race, creed, or political beliefs, and pursue at all times a policy of aggressive struggle to improve our conditions.”

The same is true today. As Sanders’ Chief of Staff (and former UE Local 896 member) Misty Rebik told a meeting of the UE Western Region in April, the progress that has been made in Biden’s first 100 days is “because of people like you who have been organizing day in and day out for decades now, demanding that we have a government for the people.”

The purpose of this report card is not to congratulate or condemn the president, but to celebrate those areas in which aggressive struggle by the working class has won victories and highlight the areas in which we must redouble our efforts.

President Biden came out swinging on his first day in office, firing National Labor Relations Board General Counsel Peter Robb. Robb, appointed by Trump, had not only moved NLRB policy in a more anti-worker direction, he tried to destroy the agency altogether through administrative reorganization. Biden also reversed many of Trump’s executive orders attacking federal workers and their unions, recorded a pro-union video during the Amazon organizing drive in Bessemer, Alabama, and has created a White House Task Force to encourage unionization.

However, Biden’s rhetorical support for the PRO Act (which would improve collective bargaining rights) and the Raise the Wage Act (which would raise the Federal minimum wage to $15 an hour) has yet to be translated into an effective political strategy to push these crucial pieces of legislation through the Senate.

Biden’s first significant piece of legislation, the American Rescue Plan, was exactly the kind of immediate economic relief that working people needed in order to keep the country from spiraling further into recession. It extended enhanced unemployment, provided direct payments to individuals, extended paid sick and family leave and provided significant aid to state and local governments and educational institutions, averting mass layoffs. According to the Economic Policy Institute, “If measures to suppress the coronavirus work and it is safe to return much closer to economic normality in coming months, the ARP will drive rapid and large reductions in unemployment. This is in stark contrast with the too-small efforts at fiscal rescue following the Great Recession of 2008.”

Despite Republican intransigence, Biden for the most part stuck to his guns, except on the issue of including a minimum wage increase.

The Biden Administration has been a literal shot in the arm for the fight against the COVID-19 pandemic, replacing the scattershot approach of the Trump administration with clear policies and directives based in sound science. By the end of the first 100 days, the administration had met its target of having vaccines available to everyone 16 or older who wants one. Cases and deaths have declined significantly since their peak in early January.

Following pressure from global justice organizations and healthcare advocates, the administration announced on May 5 that it would support a waiver of vaccine patents at the World Trade Organization, choosing the health of working people around the world over the profits of Big Pharma. We won’t bring the virus under control until vaccines are administered world wide. In addition to waiving patent protections, the U.S. must take leadership to ensure vaccines are available to all who need them, as well as aid to ensure there are healthcare workers on the ground to administer them.

Addressing the pandemic in the workplace, on the other hand, has moved at a disappointingly slow pace. Despite an announced March 15 deadline for specific OSHA rules on COVID-19 (which the agency declined to address under the Trump administration), the new rules were not proposed until late April.

Biden’s proposed investments in physical and human infrastructure, the American Jobs Plan and the American Families Plan, are a good start. They recognize that there is an important role for the government to play in creating jobs, and the necessity of addressing climate change and providing care for children, the elderly and people with disabilities.

Unfortunately, these measures are not nearly on the scale of what is needed to tackle unemployment and, crucially, ensure that workers displaced by the end of the fossil fuel economy can move into good, union jobs. To do that, Congress must pass (and Biden must support) the THRIVE Act, which will invest $10 trillion over 10 years to create 15 million union jobs, effectively ending unemployment while addressing the threat of climate change.

On the positive side, Biden’s appointments related to international trade indicate that he has moved away from the old job-killing “free trade” model, embodied by NAFTA, the World Trade Organization, and the proposed Trans-Pacific Partnership and embraced for decades by both Republicans and corporate Democrats (including Biden himself). His new U.S. Trade Representative, Katherine Tai, previously led negotiations over NAFTA 2.0 for the Democratic majority in Congress, helping to strengthen provisions in the new agreement that protect Mexican workers’ ability to form independent unions and negotiate for better pay and benefits.

The Biden administration has taken some positive steps to remedy the fact that millions of people in the U.S. lost their health insurance due to pandemic-related layoffs, including expanding enrollment opportunities and increasing subsidies for working families under the Affordable Care Act. Biden has also indicated support for allowing Medicare to negotiate drug prices.

However, his policy of expanding funding for COBRA coverage is primarily a handout to insurance companies (which saw record profits during the pandemic), and doesn’t even cover workers who lose their jobs because their company goes out of business.

Biden has also opposed the only workable solution to our nation’s healthcare crisis, a universal Medicare for All system, which is practical, affordable and popular across the political spectrum.

Biden’s proposal in the American Families Plan to provide universal preschool to all three- and four- year-olds and two years of free community college is an important step towards bringing our public education system into the 21st century. However, Biden has yet to address the crushing weight of student debt which is both a burden on millions of working people and a drag on our economy.

Furthermore, Biden’s push to re-open K-12 schools in order to accommodate standardized testing is purely motivated by protecting the profits of the private companies which administer the tests, and has increased COVID-19 transmissions. The Department of Education could have easily issued a waiver for the tests, allowing districts to stay remote in order to protect the health and safety of students, teachers and school workers.

Following the conviction of Minneapolis police officer Derek Chauvin for murdering George Floyd last year, Biden praised the verdict and recognized that “such a verdict is also much too rare.” His Attorney General, Merrick Garland, has also indicated that the Justice Department will resume using consent decrees to hold police departments accountable. In the wake of the killings of six women of Asian descent in Atlanta in March, he clearly denounced hate crimes against Asian-Americans.

However, Biden has so far failed to take bigger steps to curb police violence towards Black people and other people of color, such as ending the sale of military weapons to police departments. He has proposed no measures to address the economic racial disparities which disproportionately subject working people of color to unemployment, low wages, and lack of healthcare.

Biden has re-committed the U.S. to joining the Paris Accord and working with the rest of the world to address the existential threat of climate change, a welcome change from the climate denial of the Trump administration. His American Jobs Plan makes solid commitments to providing good, union jobs for those displaced by the transition away from fossil fuels. However, his administration’s efforts are, so far, not nearly sufficient on either count.

As UE ally the Sunrise Movement put it on the eve of Biden’s April 22 Climate Summit, “While many will applaud the President’s commitment to cut U.S. emissions by at least half by 2030, we have a responsibility to tell the truth: it is nowhere near enough. The science is clear – if the US does not achieve much, much more by the end of this decade, it will be a death sentence for our generation and the billions of people at the frontlines of the climate crisis in the US and abroad.”

In order to address the scale of the climate crisis, and ensure that working people do not bear the brunt of this transition, Biden must support bold legislation like the THRIVE Act, which will create 15 million good, union jobs while cutting emissions by the necessary amount.

Early in his presidency, Biden issued a number of executive orders reversing some of Trump’s cruel and inhumane policies towards migrants and refugees. However, his administration has quietly continued many of those same policies, and has made no effort to promote the kind of comprehensive immigration reform that would protect immigrant workers from exploitation and provide a roadmap to citizenship for the millions of immigrants currently working and paying taxes in the U.S.

Biden’s slowness to re-engage with Iran on the issue of nuclear weapons and his stoking of tensions with Russia and China are all serving to make the world a more dangerous place. His announcement that the U.S. will withdraw from Afghanistan after almost two decades of war is welcome, provided that U.S. troops are not merely replaced with mercenaries funded by the U.S., or by ongoing bombardment by the U.S. military from just outside the country’s borders, both of which are already being floated.

As journalists Medea Benjamin and Nicolas J.S. Davies wrote recently in Foreign Policy in Focus, “President Biden took office promising a new era of American international leadership and diplomacy. But with a few exceptions, he has so far allowed self-serving foreign allies, hawkish U.S. interest groups and his own imperial delusions to undermine diplomacy and stoke the fires of war.”