A Real Program to Fight Inflation 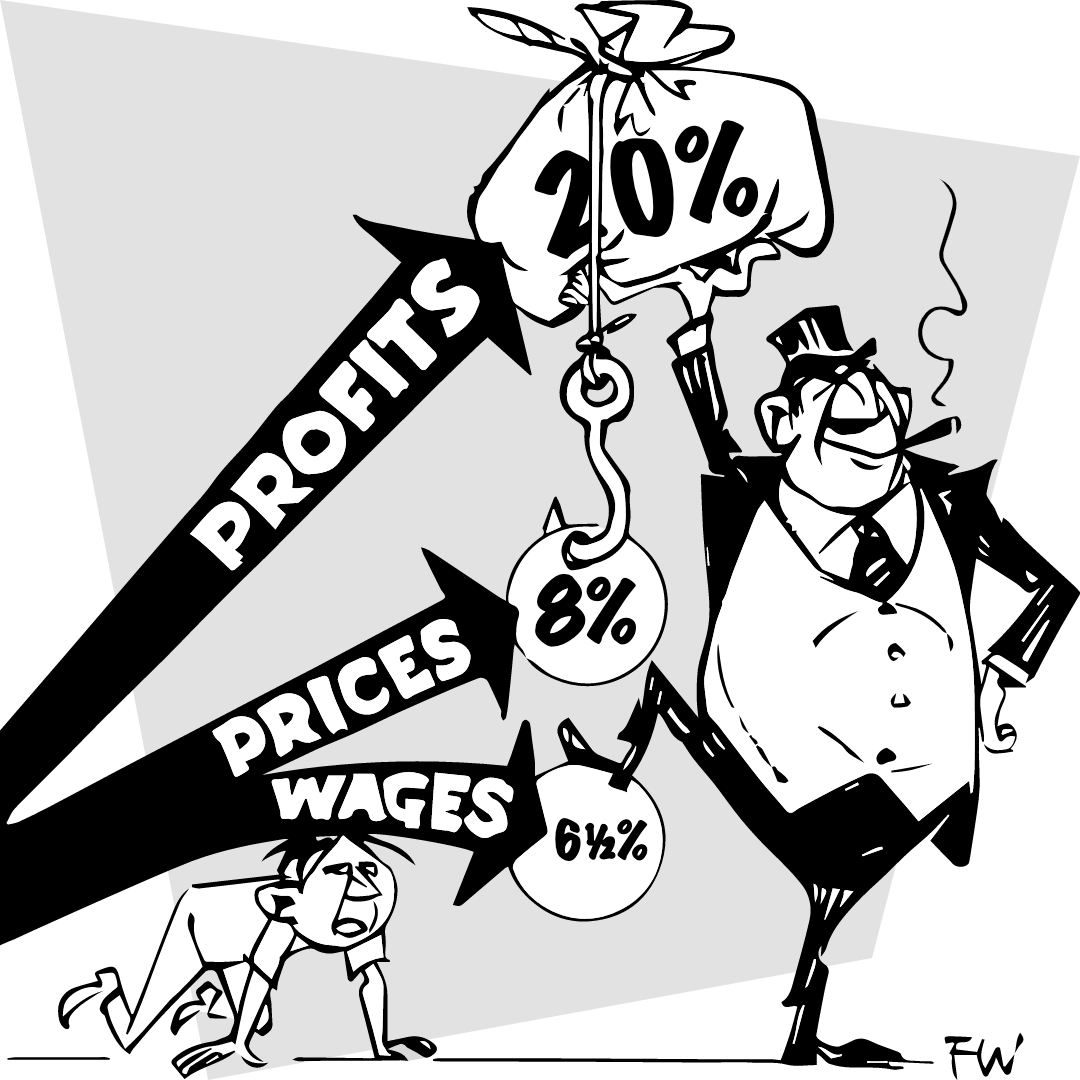 Fred Wright cartoon from the 1970s, updated to reflect increases in corporate profits, prices and wages over the past year.*
February 24, 2022

Inflation has become a big issue for many working people, with two thirds of respondents in a recent poll identifying it as a major concern for them personally. Of particular concern is the fact that inflation is especially high for the daily essentials for working people, with increases in the cost of gasoline, utilities, transportation, and meat, poultry and fish all well above the overall inflation rate. However, the corporate press largely ignores the role of corporate profits and price-gouging in driving inflation, and the main solution offered — raising interest rates — would be a disaster for working people.

The explosion of corporate profits is a major contributor to the inflation we are currently seeing. Those corporations with the market power to set prices are using scarcity and the expectation of inflation to jack up prices. Corporate profit margins are at their highest level since the period after World War II, when supply chain disruptions caused by the war led to inflation and big business similarly took advantage of this to gouge consumers.

As former U.S. Secretary of Labor Robert Reich points out in a recent op-ed in the Guardian:

While most of the price increases now affecting the US and global economies have been the result of global supply chain problems, this doesn’t explain why big and hugely profitable corporations are passing these cost increases on to their customers in the form of higher prices.

They don’t need to do so. With corporate profits at near record levels, they could easily absorb the cost increases. They’re raising prices because they can.

Unfortunately, the Biden administration has failed to act to curb this kind of price-gouging, with the President in January saying that “inflation is the Fed’s job,” referring to the Federal Reserve Board, which runs our country’s central bank.

The Federal Reserve Board has only one “tool” to fight inflation: raising interest rates. This is a common monetary policy used to tackle inflation, but would be extremely dangerous at this time. Raising interest rates could easily knock our economy into a recession and even a deflationary spiral, leading to mass layoffs, unemployment, and intensified misery for working people.

Professor James K. Galbraith of the University of Texas at Austin, calls Biden’s approach “radically false and politically suicidal” in a recent article in The Nation. He explains:

Why can’t the Federal Reserve hold the line without hurting workers? Because to keep to any given inflation target—2 percent per year, say, as the Fed would prefer—when some prices are rising by much more than that, means that some other prices must rise much less, or even fall. What other prices are there? In a service economy, it’s mainly wages. But to cut back wages, you need recession and mass unemployment. Want to know how that works politically? Ask Jimmy Carter.

Inflation is always aggravated by bad actors who abuse their market power to profiteer. Against this, the best weapon is the empowered consumer, informed and organized. The greatest experiment in economic democracy ever attempted, the Office of Price Administration under Chester Bowles from 1943 through 1945, deployed over 300,000 civilian volunteers to keep prices in check. The OPA was hated by business and was abolished in 1946, precisely because it was a countervailing power that actually worked.

The program laid out by Galbraith is similar to the programs that UE fought for in the 1970s and, before that, in the 1940s. ​​In a 1942 pamphlet, “The High Cost of Living and How to Fight It,” UE declared:

The only effective way to prevent profiteering and price rises is for the Congress to pass the right kind of law forbidding price increases and for the President and all his law-enforcement officers to enforce that law.

By this we mean, that when the large corporations and all their outlets have the choice between going to jail or halting price rises, then they will stop profiteering—and not before!