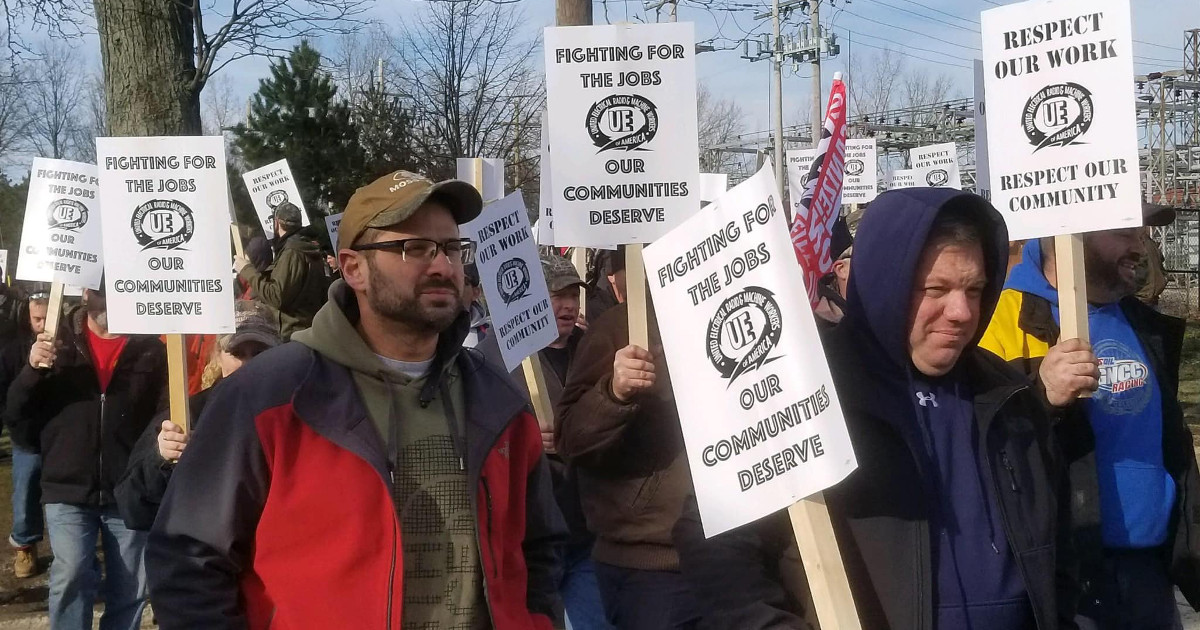 Wabtec will enter into a relationship with its largest workforce in Pennsylvania under unacceptable terms and conditions today, after Wabtec/GE negotiators walked away from a proposal from U.E. 506 leadership that would have allowed for continued production and cooperation.

“Despite our best efforts, Wabtec/GE negotiators refused to respond to our latest proposal and walked away from negotiations on Sunday putting its entire hourly workforce in an impossible, and potentially dangerous situation,” said Scott Slawson, U.E. 506 President. “Wabtec, negotiating alongside GE, could easily agree to an interim agreement that would allow our teams to negotiate a fair contract that reflects the complexities and intricacies of the Lawrence Park plant, but has adopted an unreasonable position that is nothing short of mystifying.

“Wabtec/GE refuses to bargain on any of the open subjects unless and until we agree to bury the family sustaining wages we have rightfully earned, and accept work terms and conditions that would put our members in harms’ way. The fight to offer employees a safe and healthy workplace has been underway for nearly a century, and the terms and conditions being implemented today are not only archaic but irresponsible, creating an unnecessary risk to our members.

“Over the years, at times it appeared that GE was hellbent on destroying Erie’s long-held middle-class wage earned by the highly skilled manufacturing workers who have for eight decades built the locomotives that support a perpetually profitable company. Other than an extended desire to create a permanent underclass in Erie County, we can find no motivation for Wabtec to engage in such a combative manner. U.E. 506 members have earned the wages we have fairly negotiated for decades, and it’s not the responsibility of our members to aid this multi-billion-dollar company in their quest to destroy Erie’s middle-class jobs. A two-tiered wage system for the same job is immoral and unacceptable. When the person working across from you with the same exact job earns 50% of your hourly rate, respect is lost. And when a worker goes to work under dangerous working conditions, lives are lost.”

On Saturday, the 1,700 hourly employees at Wabtec represented by U.E. 506 and U.E. Local 618, representing salaried non-exempt workers, voted to authorize a strike, if necessary. This is the first time members of UE 506 have voted for a strike authorization in 1969, fifty years ago. The proposed terms and conditions would negatively impact every aspect of the daily working and personal lives of the Wabtec workforce.

The current negotiations between UE 506 and Wabtec began on January, 29. Despite being the union’s offer of unlimited availability there have been just eight negotiating sessions. Negotiations were set in motion after Wabtec rejected a UE 506 proposal that the company honor an existing collective bargaining agreement through the continuation period (one year from the date of the sale). If accepted, it would have provided a healthy timeframe for the new labor/management relationship to be established, to educate Wabtec on the complexity of the Lawrence Park site, and to work hand-in-hand to eventually negotiate an agreement that supports Wabtec’s new business.