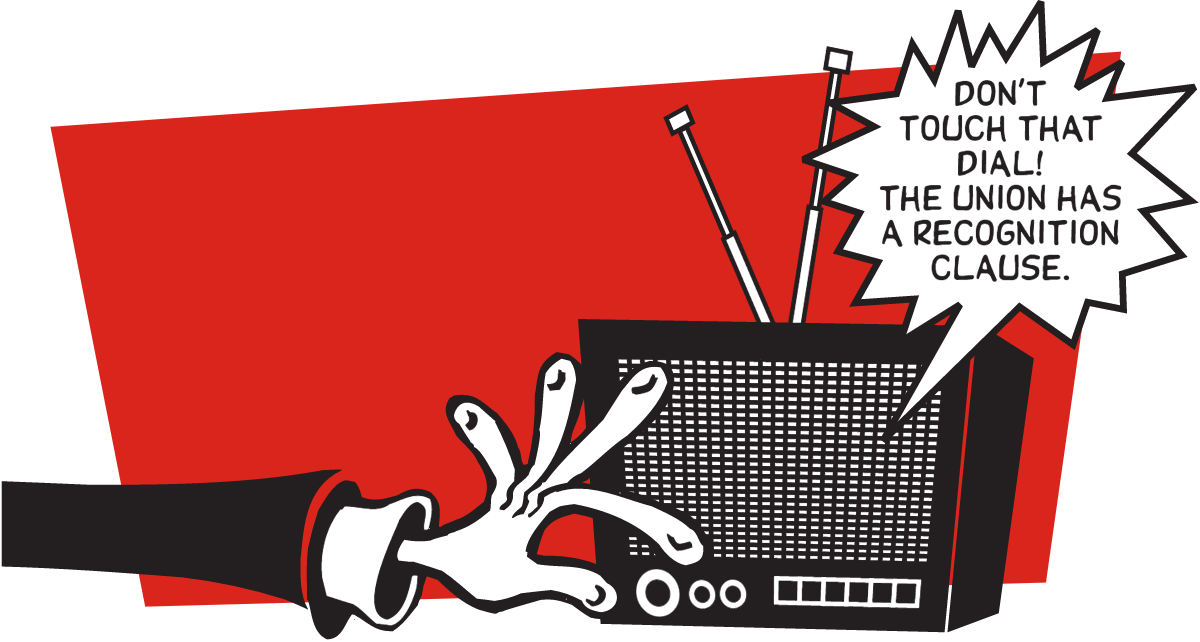 On Friday, the Plant Superintendent, Cotton Mather, approached the Union Shop Chairperson Sam Bellemy, “Sam, I just wanted to let you know that starting Monday no radios are going to be allowed in the mill.” “What’s this about” asked Sam. “I thought we had all problems worked out about the radios; has someone been playing theirs too loud?”   “It’s just that the top bosses feel that they are too distracting.  People need to pay more attention to their work.” said Cotton. Sam thought for a minute, “Well I guess we’ll have to file a grievance.”  “No way,” said Cotton, “there’s nothing in the contract about listening to radios, and the management rights clause says we have the right to run the factory.”

Anne Bonney, the Union Chief Steward had been hearing rumors that the company was going to subcontract the billing department work to a company in Ireland.  On Monday she and the other members of the Union Committee were called into the Department Manager's office. “What’s going on?” she asked George Rahkam, the manager. “I’ve got some bad news.  Starting in 3 months all the billing will be done in Ireland,”  George said.  “Are you going to sit down and bargain with the Union about this?” asked Anne. “We don’t have to," said George, "the management rights clause says we have the right to run the business and you don’t have anything in the contract that says we can’t subcontract the work.”

There is no union contract written that covers every possible situation that can occur. There are some that try, but they are usually incomprehensible to mere mortals. Because of this there are usually two clauses in the contracts that are basically general in nature.  One is the "Management Rights" clause, which states some of the general rights that management has. The other is the “Recognition" clause, which states the rights of the Union and the obligation of management to deal with the Union.

Most often the Recognition clause is at the beginning of the contract and reads something like this:

The employer recognizes the Union as the sole and exclusive bargaining agent, for the purpose of establishing wages, hours and conditions of employment.

Where Do Union Rights Come From?

The reason this kind of language is so common is that the Recognition clause is just repeating what the National Labor Relations Act (NLRA) says in Section 8(d) [most state labor laws dealing with public sector employees also have similar language]:

For the purposes of the Act, to bargain collectively is the performance of the mutual obligation of the employer and the representative of the employees to meet at reasonable times and confer in good faith with respect to wages, hours and other terms and conditions of employment…

Processing Grievances is a Form of Bargaining!

So under most of our contracts and under the law, the employer must bargain with the Union — and processing grievances is a form of bargaining — when unresolved issues regarding wages, hours and conditions of employment arise.

Looking at the Issue of Playing the Radio

This is a perfect example. The right to listen to radios isn’t in the contract, but Sam will file a grievance under the recognition clause and can even note that the employer violated section 8(d) of the NLRA [or appropriate state law]. The employer is required to bargain with the Union over conditions of employment. Removing radios would be changing employees’ conditions of employment and therefore the employer must bargain with the Union before making any such change.

The importance of the Recognition clause in grievances concerning sub-contracting was made clear in an arbitration case that UE Local 715 won.  The company had announced that they were going to subcontract truck-driving work and they refused to bargain with the Union about this. In filing a grievance one of the articles the Union cited was the Recognition clause. In awarding a victory to the Union the arbitrator held that “The contract and the case law under the National Labor Relations Act require the parties to bargain collectively whenever subcontracting would cause the elimination of jobs of members of the bargaining unit.”

Restrictions on Our Right To Bargain and Grieve

Never take the bosses word that they don’t have to bargain over an issue. Check with the Union first. Because even if the Union has “waived” its right to bargain or grieve an issue, the company may be obligated to bargain over the effect of the change.

The voluntary list is fairly small but covers some important topics. For example it is voluntary for an employer to bargain over the decision to close plants or eliminate part of the business. They must, however, bargain over the “effects on employees” of such decisions. This is where we bargain over severance pay, etc. A decision to close a plant that is based solely on wanting to pay lower wages may move this issue into the “mandatory” bargaining category. Other “voluntary” items are picking supervisors, pre-employment tests, advertising, management salaries, etc.

As most stewards soon realize, there will be many fights over what the Recognition and Management Rights clauses mean. We must always try to use the Recognition clause and Section 8(d) of the NLRA to demand the greatest rights for the workers and the Union to "push the envelope.”

We must always try to make management bargain over any proposed change, no matter what the Management Rights clause says. We won’t win every one, but by sticking to our rights and having an active membership behind us, we can “train” management to bargain over most working conditions.

Making management live up to its obligation to bargain with the Union is an important issue. Stewards should take the time to explain to members why respect for the Recognition clause is worth fighting for. Buttons, stickers, and other visible signs are useful in reminding management that the members won’t put up with seeing their rights trampled on.

Issues the Boss Must Discuss

Here is a list of some issues that management must talk to the Union about unless the Union has specifically waived its right to bargain or grieve them (by previously coming to agreement on the issue):

In The Legal Rights of Union Stewards, author Robert Schwartz has the following recommendation:

A union that is concerned that its contractual management-rights clause may be construed as a bargaining waiver should try to obtain new contract language, perhaps by adding a sentence affirming that the union is not waiving its rights to bargain. If this is not practicable, consider submitting a letter to management during contract negotiations stating that the union does not view the existing management-rights clause as a waiver of its NLRA bargaining rights.

The employer must give notice to the union of the proposed change BEFORE any new policies are announced.

The union hereby requests bargaining concerning the company's proposal to eliminate radios.  Please advise the union as to when the company will be able to negotiate concerning the proposed change.  As you know, labor law forbids any implementations of a new policy until the bargaining process is completed.