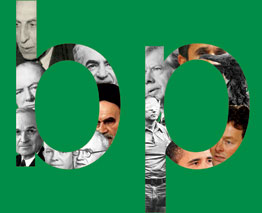 British Petroleum, the company responsible for the worst single-source environmental catastrophe in U.S. history, has over its 100-year history caused a number of environmental and workplace disasters. But the harm BP has caused goes further. In the early 1950s, BP and the British government convinced the U.S. to overthrow the democratic government of Iran – an action that has had disastrous consequences for Iran, the U.S., and the Middle East to this day.

Before the Gulf disaster – and the stupidly arrogant statements of its CEO Tony Hayward – many Americans probably didn't even know that BP was a British company. In the late 1970s BP began gobbling up U.S. oil companies – Standard Oil of Ohio (Sohio) in 1978, Standard Oil of Indiana (Amoco) in 1998, and Atlantic Richfield (Arco) in 2000. It's now the third-largest energy company in the world.

The April 20 explosion of the Deepwater Horizon oil rig killed 11 oil workers and started the giant oil leak that has devastated the Gulf of Mexico. For BP, this deadly explosion may be the worst, but certainly not the first. In 1965 the BP oil rig Sea Gem collapsed, killing 13 workers. In September 1999 BP agreed to pay $22 million – including a $500,000 criminal fine – for its hazardous waste dumping on Alaska's Endicott Island.

In 2005 BP's refinery in Texas City, Texas exploded, killing 15 people, injuring 180 and trapping thousands of residents in their homes. OSHA concluded that the management failures behind the explosion reached to BP's corporate headquarters in London. The company pled guilty to felony violations of the Clean Air Act and paid a $50 million fine. In 2009 OSHA fined BP another $87 million – the biggest OSHA fine ever – for failing to correct the hazards that caused the 2005 explosion.

To understand BP and its contempt for environmental and human rights, we have to go back to the company's origins, in British efforts to dominate Iran and its natural resources.

BP's original name was the Anglo-Persian Oil Company. It owes its existence to the corruption of Iran's monarchs, who over several decades sold off the country's resources to foreigners to support their own lavish lifestyles. The reigning Shah of Iran in 1891 sold Iran's entire tobacco industry to the British Imperial Tobacco Company for £15,000; the Tobacco Revolt, a mass boycott by the Iranian people, forced him to cancel the deal. In 1902 his son, the next shah, sold exclusive rights to Iran's oil and natural gas to a London financier, William Knox D'Arcy. A group of British investors formed the Anglo-Persian Oil Company (APOC) to exploit what was called the D'Arcy concession. By 1913 Anglo-Persian was extracting huge amounts of Iranian oil and had built the world's largest oil refinery at Abadan. With World War I imminent, at the urging of Winston Churchill the British government bought a 51 percent share of the company. (In the 1980s Margaret Thatcher privatized the government's BP holdings.)

The terms of the D'Arcy concession were obscenely one-sided. Churchill called it "a prize from fairlyland beyond our wildest dreams." Iran was promised a 16 percent royalty, but the Brits cheated on the calculation and in 1920 paid Iran a pitiful £47,000, while they made millions from its oil.

"The standard of living that people in England enjoyed all during the 1920s and '30s and '40s was due to Iranian oil," says journalist Stephen Kinzer. "But at the same time, Iranians were living in some of the most miserable conditions of any people in the world."

Oil workers at the Abadan refinery – whose labor was largely responsible for Britain's prosperity – were paid 50 cents a day with no benefits. They lived in a shantytown called Kaghazabad (Persian for "Paper City") with no running water or electricity, surrounded by mud, stagnant water, and biting flies.

The monarchy's sell-off of Iran's patrimony fueled popular opposition to the Qajar dynasty, which had ruled Iran since 1794. A rebellion in 1905 forced the Shah to accept a parliament (the Majlis) and constitution. But the monarchy and the British reversed many of the democratic reforms. In 1919 the British imposed the Anglo-Persian Accord giving them control of Iran's army, treasury, transport and communications – making Iran a virtual British colony. In a final revolt against the Qajars, the Majlis in 1925 deposed the hated Ahmad Shah and offered the Peacock Throne to an uneducated but ruthless military officer named Reza.

Reza Shah ruled with an iron fist – he allowed no labor organizing nor press freedom – but enacted some modernizing reforms and pushed back against the British. In 1928 he demanded a better deal for Iran's oil. Anglo-Persian stalled negotiations for four years. Only when the Shah angrily declared the D'Arcy concession cancelled did the company yield a little – it gave up claims to some territory, agreed to pay a minimum annual royalty of £975,000, and changed its name to Anglo-Iranian Oil Company (AIOC) because the Shah did not like the name Persia.

Reza's pro-Nazi sympathies led the British to overthrow him in 1941, placing his 21-year-old son Mohammad Reza on the throne. But removing the strongman had unintended consequences.

In March 1946 oil workers at the Abadan refinery arose in an unprecedented strike, demanding better housing, healthcare, and AIOC's compliance with Iran's labor laws. The British refused to negotiate, stirred up divisions between majority Persian workers and ethnic Arabs, and arranged for two British warships to show up just off shore. They ended the strike with promises to obey the labor laws, which they never did.

With Reza Shah gone, the Majlis also came back to life. The movement in parliament and in the nation for democracy and freedom from British domination soon centered around Mohammad Mossadegh, long one of the country's most principled and incorruptible politicians.

The British sought revenge. Anglo-Iranian removed all of its managers and technicians (it had refused to train Iranians for such positions.) It refused to ship Iran's oil in its tankers (Iran owned none) and organized a global boycott of Iran's oil. The British navy even seized an Italian tanker carrying Iranian oil. The British position was that Iran had "stolen" its oil. They wanted U.S. help, but President Harry Truman was sympathetic to Iran and demanded that the British negotiate with Mossadegh – something they had no intention of doing. Truman, however was unwilling to buck the British economic blockade of Iran, which was strangling its economy and tightening the screws on its democracy.

Anglo-Iranian wanted a British military invasion of Iran. Not only did Truman object, but Labor Party Prime Minister Clement Attlee had no stomach for it.

Not so Winston Churchill, who returned to power in the 1951 British election. In the campaign the Conservative Churchill attacked the Labor Party for lack of aggressiveness against Iran. Spies operating out of the British embassy worked to overthrow Mossadegh. When Mossadegh learned of this, he broke off diplomatic relations, closing Britain's embassy and expelling its spies as well as its diplomats.

Mossadegh came to New York in October 1951 for a UN Security Council debate on a British resolution condemning Iran's oil nationalization. Mossadegh, a skilled lawyer and parliamentary debater, clearly beat the British UN ambassador, and increased public support for Iran in the U.S. and worldwide. He went to Washington to meet President Truman, stopping in Philadelphia to visit the birthplace of American democracy, Independence Hall and the Liberty Bell. Time magazine put him on its cover as "Man of the Year," calling him "the Iranian George Washington."

Over many years Britain developed a network of Iranian agents and bribed officials. But with its Secret Intelligence Service kicked out of Iran, it couldn't do much. The 1952 election of Republican President Dwight Eisenhower revived British hopes, and the two brothers chosen to run Eisenhower's foreign policy – John Foster Dulles as secretary of state and Allen Dulles as CIA director – signed on to British coup plans even before the new administration took office. President Eisenhower resisted, but the Dulleses won him over not on the basis of British oil interests, but with Cold War fears of an imagined Soviet takeover of Iran.

Kermit Roosevelt, a top CIA operative and grandson of Theodore Roosevelt, ran "Operation Ajax" from the U.S. embassy in Teheran. He took up where the British left off, bribing generals, newspaper publishers, street gang leaders and Muslim clergy. Stories planted in newspapers and riots by hired mobs painted a false picture of Mossadegh as an ally of Russia and an enemy of Islam.

Iranians overwhelmingly supported Mossadegh and his policies. He advanced the rights of women, enacted sick pay and unemployment compensation for workers, and freed peasants from forced labor for landlords. But with the cooperation of the Shah and key military leaders, a few CIA agents in August 1953 overthrew Mossadegh and killed democracy in Iran. The new regime arrested the 71-year-old Mossadegh, tried and convicted him of treason, and sentenced him to three years in prison and life under house arrest. He died in 1967.

The coup installed General Fazlollah Zahedi as prime minister, but he lasted only two years. The Shah regained the absolute power of earlier shahs, and he hired and fired prime ministers at will. Military officers loyal to Mossadegh were shot, as were other democrats and dissidents, and for the next 26 years the Shah ruled through the terror of his secret police, the Savak.

Iranian democracy died so the British could own Iran's oil. But because the U.S. government overthrew Mossadegh, the British lost their monopoly. AIOC – renamed British Petroleum in 1954 – got 40 percent control of Iran's oil. Another 40 percent went to the five major American oil companies, and the remaining 20 percent to Royal Dutch Shell and the French petroleum company now known as Total.

In 1963 the Shah gained a resolute enemy when his police arrested Ayatollah Ruhollah Khomeini, who as a young Shiite cleric had opposed Mossadegh. But the 1979 Iranian Revolution that overthrew the Shah included much more than Islamic fundamentalists. In the mass demonstrations of 1978 and '79, many carried pictures of Mossadegh. This was both a protest against his overthrow and a call for the kind of secular democracy he had represented.

The first post-revolution governments were dominated by people associated with Mossadegh and his principles, including Prime Minister Mehdi Bazargan and President Abolhassan Bani-Sadr. But when President Carter allowed the ex-Shah to come to the U.S. for medical treatment, many Iranians feared a repeat of 1953 – a U.S. coup to restore the Shah. A group of Islamic militants seized the U.S. embassy – the place from which the 1953 coup had been organized – and held 52 Americans hostage for 444 days. The hostage crisis doomed Carter's re-election – and enabled Islamic fundamentalists around Khomeini to consolidate power.

The past 31 years of bad U.S.-Iranian relations have their roots in the CIA overthrow of Mossadegh, on behalf of an arrogant British oil company. Few Americans remember what happened in Iran in 1953, but nearly all Iranians do. When U.S. presidents preach about the virtues of democracy, it sounds like hypocrisy to millions of people around the world who know that Iran once had the beginnings of a democracy, but the U.S. government killed it.

Long before BP poisoned the Gulf of Mexico, our government's support for that company poisoned our foreign relations. Perhaps it is time for us to do what Prime Minister Mossadegh and the Iranian people did in 1951, and declare that BP is unfit to control our resources – and that our oil, our environment, and our government should belong to us.

A highly-readable account of the 1953 coup and its impact is All the Shah's Men: An American Coup and the Roots of Middle East Terror, by Stephen Kinzer, a veteran New York Times foreign correspondent (2003, 296 pages, paperback).

To see a excellent six-minute video on the 1953 CIA overthrow of Iranian democracy, click here.