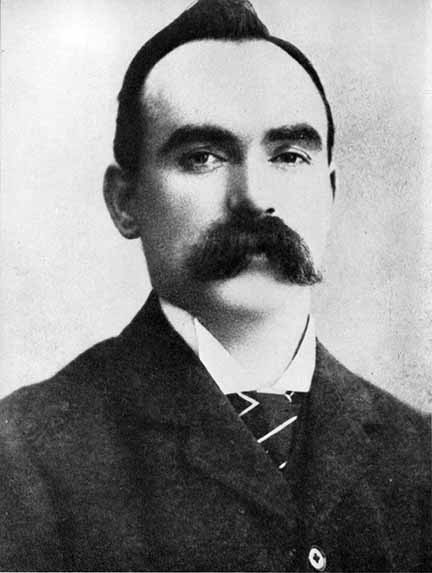 James Connolly (1868-1916) organized workers in Ireland, Britain and the U.S. and was a principal leaders of the Easter Rising. After the rebellion was defeated, Connolly and other leaders were executed by a British firing squad.
March 16, 2016
by Peter Gilmore

An unexpected commotion disrupted routine in a busy city center on an April morning one hundred years ago.  Armed men commandeered the main post office in a major city in the world’s most powerful empire. One of their leaders interrupted the musings and conversations of those going about their business by reading out a proclamation declaring an Irish Republic.

The Easter Rising of 1916 was underway.

Over the next several days, a handful of rebels battled British troops; the imperial might directed against Dublin smashed the city’s core into smoking ruins; and the rebellion’s visionary leaders faced firing squads, their bullet-ridden corpses dumped into lime pits.

Over the next five years, much of the Irish nation united at the ballot box around the agenda of revolutionary independence; rebels constructed the infrastructure of a separatist government; guerrilla bands plagued imperial police and army; negotiations established a new political entity, the Irish Free State, which would eventually morph into a republic—more or less as proclaimed in 1916.

Little of this could have been foreseen on Easter Monday, April 24.

If a majority of the Irish population in 1916 could have been considered as nationalists, they adhered to the vision laid out by a century of Irish political leaders: home rule.  This meant an Irish parliament in Dublin governing a nation still linked to its bigger, prosperous, powerful neighbor, Britain.  Home rule, finally approved by the British Parliament, seemed almost a reality, stalled by the Great War then raging on the continent.

In 1916, some 200,000 Irishmen fought abroad in hopes of improving their political standing and furthering their political objectives (some against, but most for, home rule): Almost 200 times more Irish men responded to the call of Queen and Country than took up arms for the Republic that Easter Monday.

Among the relative few who willingly risked their lives (and those of others) in the Easter Rising were men and women who regarded British imperial control over the island nation as the source of long festering ills, political, economic, social, and cultural.

One rebel leader with an impressive record as a political activist and union organizer in three countries regarded independence as an indispensable first step in realizing a worker-run society.  Let’s destroy the British Empire’s subjugation of Ireland, he said.  But let’s also remove the power of the bosses who defraud, degrade, dismiss, and terrorize Irish working people. That the bosses might be Irish didn’t deter James Connolly from the goal of an Irish workers’ republic.

“Ireland without its people is nothing to me,” wrote Connolly.  “The man who is bubbling over with love and enthusiasm for ‘Ireland’ and can pass unmoved through our streets and witness all the wrong and suffering, the shame and degradation wrought upon the people of Ireland, aye wrought by Irishmen upon Irish men and women without burning to end it, is in my opinion a fraud and a liar in his heart.”

Connolly was born in 1868 in Edinburgh, Scotland.  Like so many others of their generation, his parents left Ireland in hopes of improving their living conditions elsewhere.  Like so many of his generation, Connolly grew up in a neighborhood of desperately poor, low-waged immigrant workers. Burning with the desire to eliminate the causes of poverty, Connolly threw himself into the labor movement.

Living and working in Scotland, Connolly became an early member of the Independent Labour Party, forerunner to today’s British Labour Party.  And he was a union organizer. On what should have been his wedding day, he and his older brother led a strike in Dundee.

From Scotland, Connolly moved to his parents’ native Ireland, becoming a founder of the Irish Socialist Republican Party. Like so many other workers, Connolly immigrated to the United States, and quickly linked up with the Industrial Workers of the World (IWW)—an organization whose pioneering industrial unionism prepared the way for UE and other CIO unions.  He organized dock workers in Philadelphia and machine workers in New Jersey.

Returning to Ireland, Connolly worked tirelessly as an organizer and leader of the independent Irish Transport and General Workers Union.  He became a founder of the Irish Labour Party.

His work took him north to Belfast.  In his American union organizing, Connolly worked to bring workers of different nationalities into the same union.  In the North of Ireland he combated orange bigotry and green bigotry to unite Catholic and Protestant workers in the same trade union.  For Connolly, solidarity could never be only a slogan.

In Dublin in 1913—with sickening success—the city’s most powerful employer conspired with other bosses and the authorities to crush the labor movement, and the Irish Transport and General Workers Union in particular.  When police brutality terrorized both picket lines and working-class neighborhoods, Connolly helped organize a workers’ defense force.  Strikers armed themselves in what became known as the Irish Citizen Army.

With World War I underway, Connolly and his union made their views clear. An enormous banner draped across the front of Liberty Hall, the headquarters building of the ITGWU, proclaimed—“We serve neither King nor Kaiser but Ireland.”  Irish people should struggle for the emancipation of the Irish working class, not kill and be killed for the phony claims of competing empires, Connolly and his comrades said.

Connolly insisted that real independence for Ireland depended on the emancipation of the working class:  “If you remove the English Army tomorrow and hoist the green flag over Dublin Castle [site of British administration], unless you set about the organization of the Socialist Republic your efforts will be in vain.  England will still rule you.  She would rule you through her capitalists, through her landlords, through her financiers, through the whole array of commercial and individualist institutions she has planted in this country and watered with the tears of our mothers and the blood of our martyrs.”

The cataclysmic events on the continent strengthened Connolly’s determination to strike for Irish independence, and thus liberate workers in Ireland and around the world by weakening the mighty British Empire.  He created a firm alliance between his Irish Citizen Army and the volunteer military companies organized by the clandestine Irish Republican Brotherhood (IRB).

An oath-bound secret society, the IRB had spent decades planning war against the British government to achieve Irish independence.  The IRB was the invisible heart of Fenianism—a transnational movement uniting Irish people, mostly of the middle and lower classes, throughout the far-flung diaspora (and especially in the United States) and in Ireland itself in the effort for an independent republic.

(In the late 1800s, Fenians briefly aligned with the most significant contemporary Irish social movement—the campaign for tenants’ rights and land reform. Michael Davitt, himself a former Fenian, developed pioneering tactics in non-violent, mass protests which would be studied by Mohandas Ghandi.)

In 1916, old Fenians, like-minded revolutionaries of a new generation, rebel women of the Cumann na mBan, and now Connolly and the union men of the Citizen Army, jointly resolved to strike the long-awaited blow.

They planned the details of the rising in secret.  Along with overseeing weapon procurement and details of troop deployment, the leaders crafted the Proclamation of the Republic to be read at the moment of revolt.  The influence of Connolly and radical labor can be seen in crucial passages of the Proclamation: “the right of the people of Ireland to the ownership of Ireland”; equal rights to all citizens, including women; and a commitment to universal suffrage. (Connolly was a strong advocate of women’s rights, writing: “The worker is the slave of capitalist society, the female worker is the slave of that slave.”) Few countries—and not Britain—gave all adults the right to vote.

On the morning of Easter Monday, April 24, 1916, 1,250 or so rebels seized key locations in Dublin and proclaimed an Irish republic. (A slightly larger number engaged in attacks on government barracks in a few other areas in the country.) Britain quickly rushed 16,000 troops to Dublin, assisted by about 1,000 armed police.  Gunboats in the Liffey River began shelling the city, pulverizing its core.

After five days of fierce fighting, the rebels made unconditional surrender. Sixty-four had been killed in combat and an unknown number wounded. Two hundred and fifty-four civilians were killed, more than 2,000 wounded.  Both British and rebel forces killed civilians for refusal to obey orders.  In at least two documented instances, British troops shot civilians (fellow citizens of the United Kingdom) out of frustration and rage.

The authorities arrested 3,430 men and 79 women. Courts marital quickly followed, issuing dozens of death sentences.  Sixteen rebels, including all seven signatories of the Proclamation, were taken out and shot between May 3 and 12.  James Connolly had been seriously injured in the fighting: gangrene ate at his leg after a bullet shattered an ankle.  British officers ordered the labor leader tied to a chair because he couldn’t stand before the firing squad.

The imprisoned thousands turned their jails into schools for advanced studies in insurrection. They would emerge as the leadership of the next phase of the independence struggle.

The Irish public had a mixed reaction to the Dublin rising, ranging from surprise to annoyance to sympathy. Ireland had long been part of the United Kingdom, and many young men were serving in British uniforms in the World War—factors which initially limited popular support for the rebellion and its conspiratorial origins.  But the severity of the British response (especially the shelling of Dublin and execution of the leaders), contrasted sharply with the heroism and vision of the rebels. The course of Irish politics became thoroughly transformed.  (In the words of the poet William Butler Yeats, “a terrible beauty was born.”)

At the first parliamentary election following the World War, on Dec. 14, 1918, voters gave a landslide victory to candidates pledged to Irish independence.  Those candidates refused to take their seats in the British Parliament in London.  Instead, they assembled in Dublin on Jan. 21, 1919, constituted themselves as an Irish parliament—the Dáil Éireann—and adopted a Declaration of Independence.

Scholars, politicians, commentators, and activists continue to debate the meaning and legacy of Easter 1916, and especially in this centennial year.  The Republic of Ireland is sponsoring official commemorative events, as are political parties and groups in Ireland and throughout the vast diaspora. Controversy over how best to observe the centennial is inevitable because the three major political parties in the Republic have long distanced themselves from the explosive origins of the nation-state.  (Northern Ireland’s violence in the final three decades of the twentieth century, sometimes justified by the goal of an “Irish republic,” caused revulsion in the Republic of Ireland.)

The legacies of the Easter Rebellion and the Irish Republic—like that of the American Revolution and American Republic—have been confounded and compromised by the relentless drive of a privileged few to expand their wealth and control of workers’ lives.  Struggles for freedom continue, as does the fight to realize Connolly’s vision: a working class organized and mobilized to win freedom from hunger, neglect, disrespect and exploitation wreaked by the bosses’ greed.

Peter Gilmore served on the UE NEWS staff for nearly three decades (1977-2006), two-thirds of that time as managing editor. He's currently an adjunct history lecturer teaching at Pittsburgh area universities. He teaches Irish-American history, among other courses. He has written extensively about early Irish immigrants in the United States.