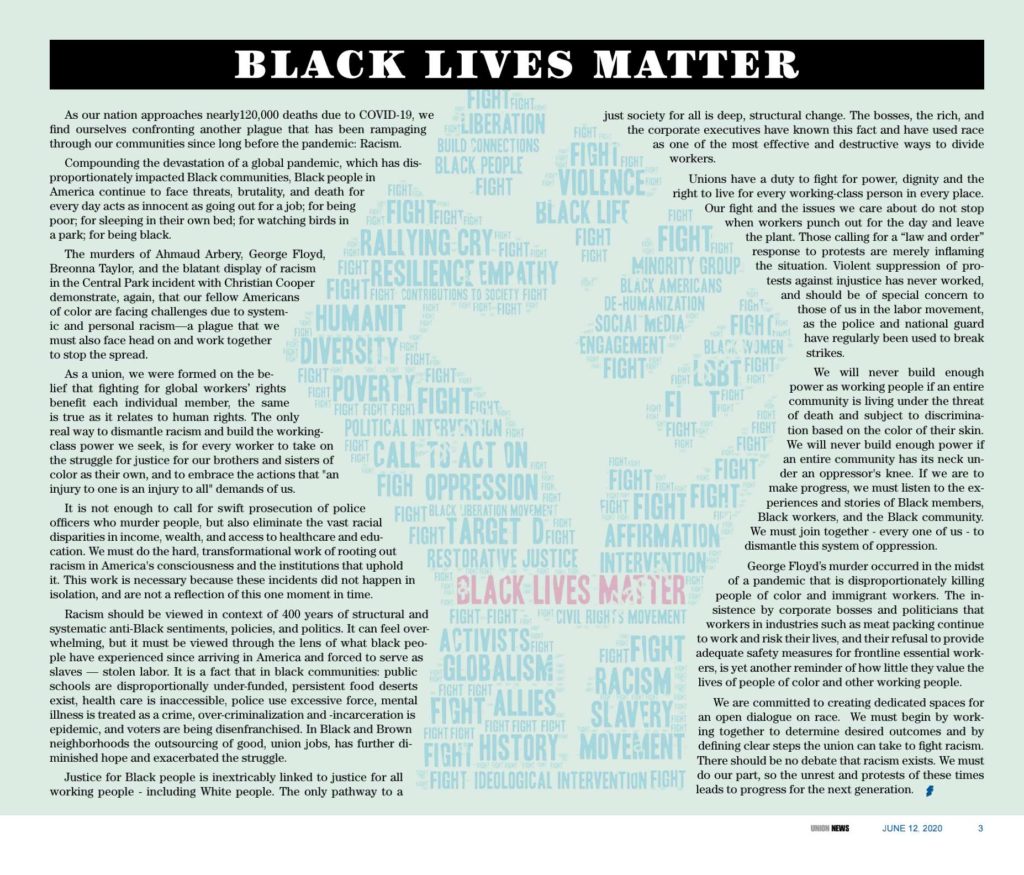 As racial justice protests swept the country following the murder of George Floyd in late May, UE’s officers issued a statement calling on working people to “stand in solidarity with our Black brothers, sisters and siblings, and to redouble our efforts to fight for racial justice.”

UE locals across the country responded to the moment in a variety of ways, from joining demonstrations, taking actions at the workplace, opening their union office to protesters, and perhaps most importantly, initiating discussions among union members about why it is important to fight racism in order to build and maintain working-class unity.

“We need to learn to listen and understand each other.”

Local 506 in Erie, PA devoted the June issue of their newsletter to the issue, printing the Langston Hughes poem “Let America Be America Again” on the front page and devoting the centerfold to a “Black Lives Matter” statement, which noted that “Justice for Black people is inextricably linked to justice for all working people — including White people” and named racism as “one of the most effective and destructive ways to divide workers.” The statement continues:

We will never build enough power and working people if an entire community is living under the threat of death and subject to discrminiation based on the color of their skin. We will never build enough power if an entire community has its neck under an oppressor’s knee. If we are to make progress, we must listen to the experiences and stories of Black members, Black workers, and the Black community. We must join together — every one of us — to dismantle this system of oppression.

Grzegorzewski wrote about the importance of protesting against injustice:

Peaceful protests and demonstrations across the country bring light to the glaring problems and issues we face as a country — That’s why we do them. During my 23 years as a member of the U.E., I have marched down the avenue, at Eastern Region meetings, Labor Day parades, and U.E. conventions across the country. Other than voting and putting the right people in office, it’s the only way to achieve change.

Demonstrating Union Priorities to the Community

Local 203, whose members who work at two large cooperative grocery stores in Burlington, VT, voted in June to replace their weekly union t-shirt days on Saturdays with a Black Lives Matter t-shirt day. “As the fight for racial justice continues across the nation and globe, we identified this as one way to ... let the community know where our priorities lie,” the local said in a Facebook post announcing the weekly t-shirt days. Local 203 also purchased a button maker to distribute Black Lives Matter buttons to their members, and donated $2,000 to racial justice organizations locally and around the country, challenging their management to match those donations.

In Iowa City, where Local 896-COGS represents graduate workers at the University of Iowa, the UE local issued their own statement condemning the murder of Floyd, and many members participated in protests in downtown Iowa City. After police attacked UE members — and many of the students they teach — with tear-gas and flash bang grenades, the local leadership issued a follow-up statement noting that “These young protesters and organizers were subjected to a chemical agent which, since 1993, has been banned for use in warfare.” The statement also called for their employer, the University of Iowa, to cut ties with the Iowa City Police Department, Johnson County Sheriff’s Department, and the Iowa State Patrol, all of which had participated in the tear-gassing.

Local 896-COGS also provided practical support to the protests by opening their union office, which is close to where the protests were taking place downtown, as a place where protesters could use the bathroom and get water, and where protest organizers could store water, sound equipment, and other supplies. Opening the union office to protesters “felt like a way we can show up that was useful in this moment,” said Elizabeth Handschy, chair of the local’s press and publicity committee. “It was really great to be able to support the protests in this unique way.”

In North Carolina, statewide Local 150 organized and participated in a variety of workplace and public actions over the “Juneteenth” weekend of June 19-21. UE members who work for different municipalities and state hospitals across the state held a moment of silence at work, took a knee at lunch for eight minutes and 46 seconds (the length of time the police officer who killed him knelt on George Floyd’s neck), and joined rallies after work.

In Durham, members of Local 150’s Durham City Workers Union chapter joined Raise Up Fight for $15, National Domestic Workers Alliance-We Dream in Black, Duke Graduate Student Union and others to rally at Durham Police headquarters. The rally opposed the city’s decision to increase the police budget by five percent, while completely eliminating any scheduled wage increases for essential city workers, who had been working for over two months risking their lives during the COVID-19 pandemic.

A statement issued by the Southern Workers Assembly, in which Local 150 participates, drew an explicit link between the pandemic and police violence:

Workers in the US are currently facing two tragic pandemics. The first is the plight of essential workers, going to work every day to risk their lives amidst COVID-19, which has now resulted in the tragic death of over 100,000 people. The second is the reality of racism and police violence. Both disproportionately impact Black workers.

“We fix it by organizing” 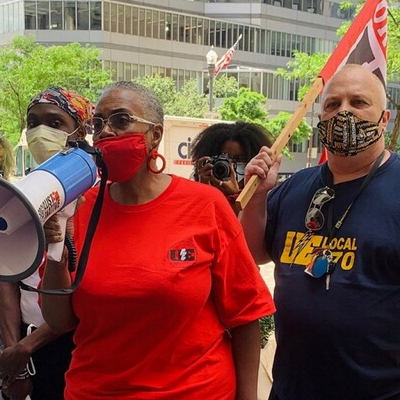 Speaking at a Black Lives Matter rally in downtown Pittsburgh on June 16, UE General Counsel Irene Thomas explicitly linked the discrimination practiced by both police and employers, and offered a concise solution:

The deep-seated racism in this country has resulted in both physical and economic violence to African-Americans. … How do we fix that? We fix it by organizing. We fix it by protesting. We fix it by stepping out and saying to these employers we’re not going to take this sh*t any more.