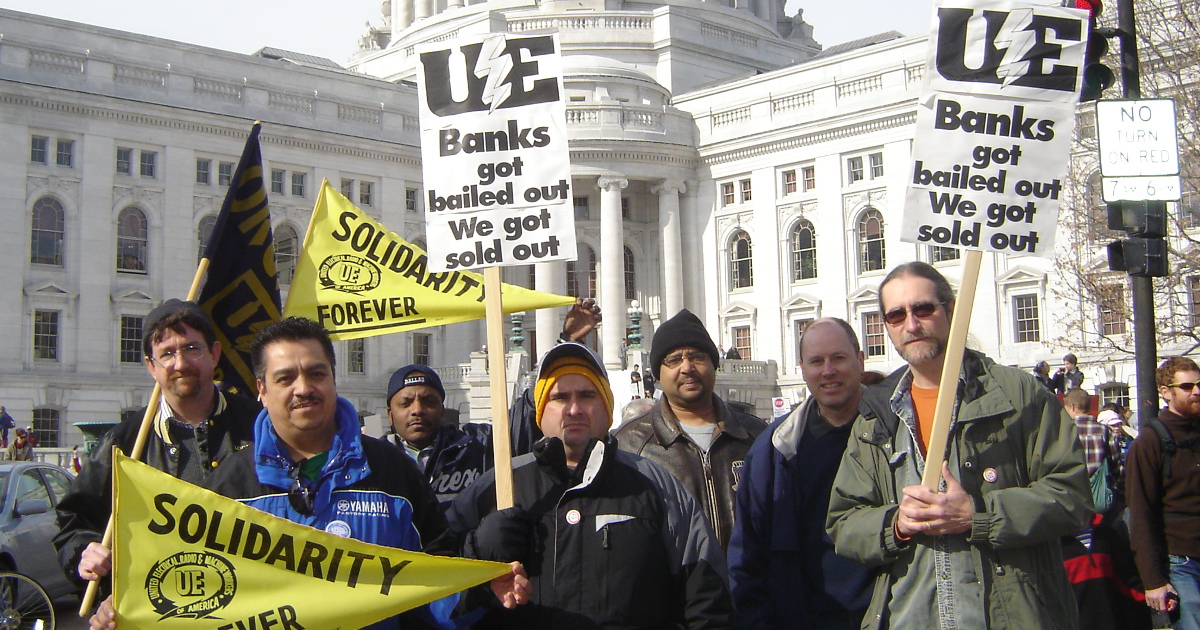 This year marks the tenth anniversary of the “Wisconsin Uprising,” when public-sector workers and their allies peacefully occupied the state capitol building in Madison to protest Governor Scott Walker’s intent to strip them of their collective bargaining rights.

The peaceful protests captured the imagination of working people across the state and country. Every UE local in Wisconsin sent members to Madison during the occupation of the state capitol, and UE locals around the country participated in solidarity actions.

Republican legislators nevertheless pushed through the so-called “budget repair bill” on a straight party-line vote. In order to pass the bill without a quorum, they stripped it of all financial items — making it clear that the bill had nothing to do with the budget, but was purely an attack on unions.

The following year, unions and allies were able to collect enough signatures to trigger a historic recall election, but Walker, outspending his opponent by a 9-to-1 margin with money raised from the national corporate elite, was able to hang onto office.

UE’s officers pointed out in a statement that “Democrats must bear significant blame for the failure to defeat Walker. President Obama has stayed out of Wisconsin since the labor rights battle started there last year, to avoid taking a stand on the issues involved. His administration and the national leadership of the Democratic Party said and did next to nothing to help labor and the Wisconsin Democrats in this fight. The Democratic National Committee refused to put any significant money into this fight, or to mobilize its national fundraising resources to help Wisconsin.

“In the recall campaign neither Barrett, the Democratic Party, nor the unions spent time or campaign money making the case for collective bargaining rights and why it was necessary to remove Walker in order to restore fairness.” The UE officers pointed out that when the question of workers’ collective bargaining rights was put directly to voters in Ohio, they repealed a similar bill by a 61-39 margin.

This failure on the part of Democrats to stand up for labor, along with the de facto de-unionization of much of the public sector in the state, helped turn Wisconsin from a reliably “blue” state into a battleground state. Although Walker was removed from office in 2018, his anti-union laws remain in effect. Copycat legislation passed by the state of Iowa in 2017 stripped public-sector workers in that state, including thousands represented by UE Locals 893 and 896, of their right to organize and bargain collectively.

The effects of Walker’s bill were catastrophic for public-sector workers and other working people. In an article on the tenth anniversary of the occupation, the Wisconsin State Journal reports that “Immediately after the law took effect, public employees making $50,000 saw an 8.5 percent decrease in take-home pay, while those making $25,000 a year saw an 11.3 percent decrease.”

Republican promises that cutting public-sector workers’ wages and benefits would promote job growth in the private sector never came true. The State Journal noted that since the anti-union law went into effect, “Wisconsin’s economic growth has generally lagged behind both the nation and other Great Lakes states. Between 2009 and 2019, Wisconsin’s GDP grew 42.3%, lagging behind U.S. GDP growth over that period of 48.3% and 42.6% for the Great Lakes region. Neighboring Minnesota’s economy grew by 47.3% during that same period.” (Minnesota, in contract to Wisconsin, passed laws strengthening workers’ rights during that period.)

The Wisconsin Uprising, although unsuccessful in its immediate goals of preventing the anti-union legislation from becoming law, brought a spirit of much-needed militance back to the U.S. labor movement and helped to inspire the Occupy Wall Street movement later in 2011.