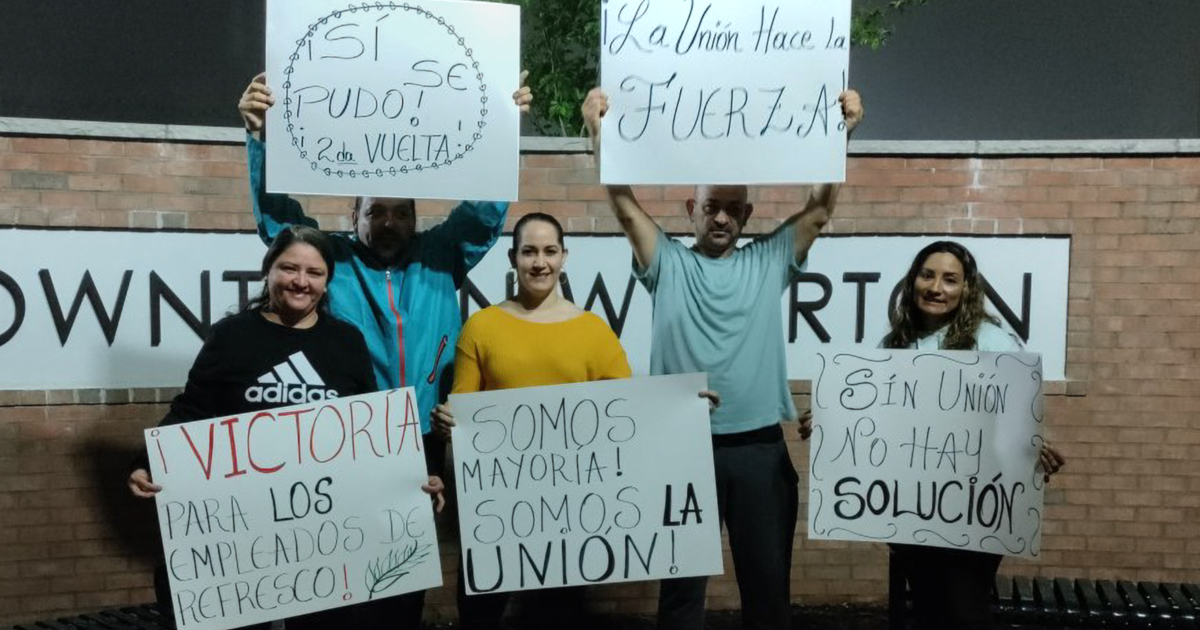 For more than two years, over 200 workers who bottle Gatorade, BodyArmor, Juice Bowl, Arizona Iced Tea, and Tropicana Juices for Refresco, the world’s largest independent bottling company, have been fighting to secure a measure of justice at work. With their second NLRB election win in less than a year, they are one step closer to winning it.

Refresco workers began organizing in February 2020 after years of abusive treatment by supervisors, low wages, paltry benefits, sexual harassment, an unforgiving attendance system that penalizes workers for getting sick, and constant schedule changes. Management’s blatant disregard for workers’ safety as the COVID-19 pandemic spread in March of that year only increased their determination to organize a union for fair treatment, but the pandemic itself stalled their efforts — at one point the entire organizing committee was sick with COVID-19.

Management also used the pandemic as an excuse to institute 12-hour shifts, which were wildly unpopular among the workers in the plant. At the beginning of 2021, the UE organizing committee began building their union in earnest, and on June 24 and 25, they prevailed in a National Labor Relations Board election. Following the vote count, workers celebrated in the parking lot, looking forward to bargaining a first UE contract which would finally bring them justice.

The company had other ideas.

Seeking to avoid having to bargain with their workers, Refresco filed a legal appeal against the NLRB certification, claiming that the election was improperly run and therefore invalid.

Incredibly, the basis of the company’s claim was that the board agent conducting the election opened the polls five minutes late. (The board agent was waiting for an interpreter — the majority of the workers at Refresco are Spanish speakers — who was stuck in traffic.) UE conclusively demonstrated that the five-minute late start, on one of two full days of voting, made no difference to the outcome of the election, and finally, in mid-December, the regional NLRB agent certified UE as the collective bargaining representative for Refresco workers.

Nonetheless, the company appealed the decision to the full NLRB in Washington, DC — and continued to refuse to bargain.

Despite the company’s delaying tactics, workers pressed ahead with setting up their UE local. Chartered as UE Local 115 in the summer of 2021, they elected a negotiating committee and stewards, and mobilized to put pressure on the company in a variety of ways.

At the end of September, they marched on company managers and delivered a petition signed by a majority of the workers in the shop, demanding that Refresco begin to bargain. Working with the Private Equity Stakeholder Project, workers spoke about their experiences to the boards of several public pension funds who hold investments in Refresco through a private equity firm. They met with the staff of New Jersey Senator Cory Booker. In November, they held a rally outside the plant, and that same week, they filed a massive complaint against the company with the Occupational Health and Safety Administration. While refusing to bargain with the union, the company regularly backed down on issues raised by Local 115 stewards in the shop, and by early 2022, they felt enough pressure that they raised workers’ wages by a dollar or more.

One of the “Dirty Dozen”

One of the key issues pushing Refresco workers to organize was the company’s clear disregard for health and safety — an issue that predated the pandemic but was, unsurprisingly, made worse by it. 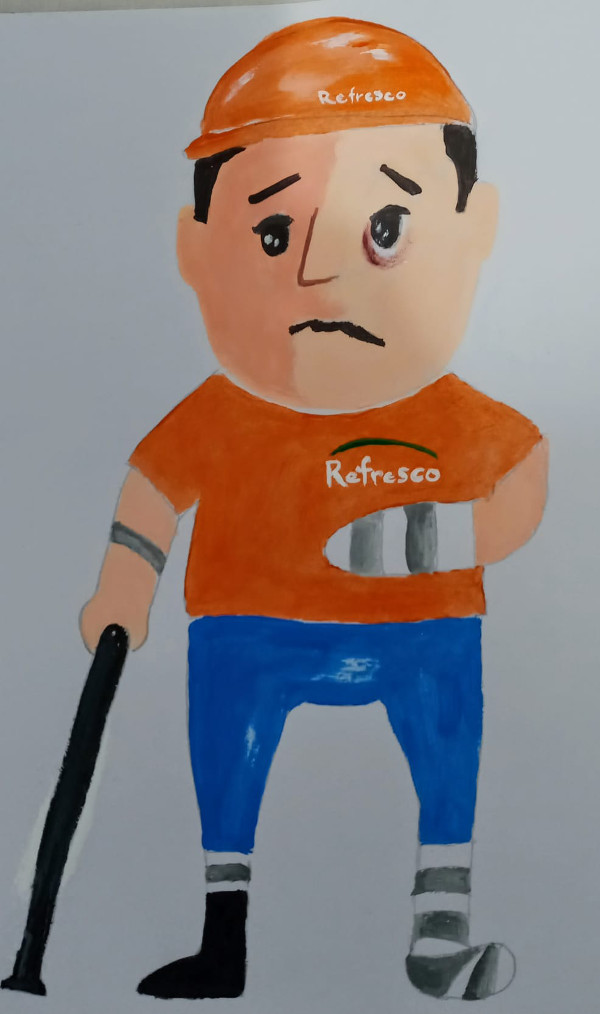 Drawing of an injured Refresco worker by Jose Cepeda, a UE leader in the shop.

When COVID-19 began spreading in the U.S. in March of 2020, workers brought their concerns to management. Management not only told them they were “essential” (as pretty much every employer was saying at the time), they claimed that the federal government had ordered them to stay open (a blatant lie). One manager even went so far as to suggest that if workers got sick, they should just drink Gatorade.

In the fall of 2021, after workers had won their first union election, the union filed an extensive complaint with the Occupational Safety and Health Administration (OSHA). There had recently been two fires in the plant, on September 27 and October 11. Workers reported that no fire alarms went off, the fire department was not called, and they had to put out the fires themselves — despite having received no training on how to put out fires.

Workers also reported dirty and chemical-filled water all over the floor in the factory, bathrooms that regularly back up, getting sewage all over the floor, and problems with excessive noise, extreme temperatures, dangerous machinery and repetitive injuries.

Workers were not receiving proper medical attention when they got injured at work. They were regularly told to wait until their shifts end and keep working with injuries — a worker who injured his foot in September was told to wait until four hours after the end of his shift for medical care. Workers were also brought back to work before their injuries had healed — including a worker who was forced to work on crutches.

One area in which the union was able to make an immediate difference in workers’ lives was connecting them with a proper lawyer to help them with workers’ compensation claims. Prior to the union, workers report that they were directed by the company to a “juice doctor,” paid by the company to minimize their injuries.

In April, Refresco was “recognized” for its poor health and safety record by being included in the National Committee on Occupational Safety and Health’s “Dirty Dozen,” an annual list of unsafe employers who put workers, families and communities at risk.

“United we will always achieve victory”

In the spring of this year, the full National Labor Relations Board issued a decision on Refresco’s complaint about the original NLRB election. Shockingly, they agreed with the company and ordered a new election.

The company once again put on a full-court press of union-busting, filling the plant with anti-union propaganda and spreading lies about UE.

“I was initially feeling somewhat unmotivated after we got that decision back,” said Carlos Cardona, a UE leader in the plant, but the union committee rallied, responding to company lies with factual information in leaflets and texts. “We always played clean,” said Cardona. “We never played dirty.” 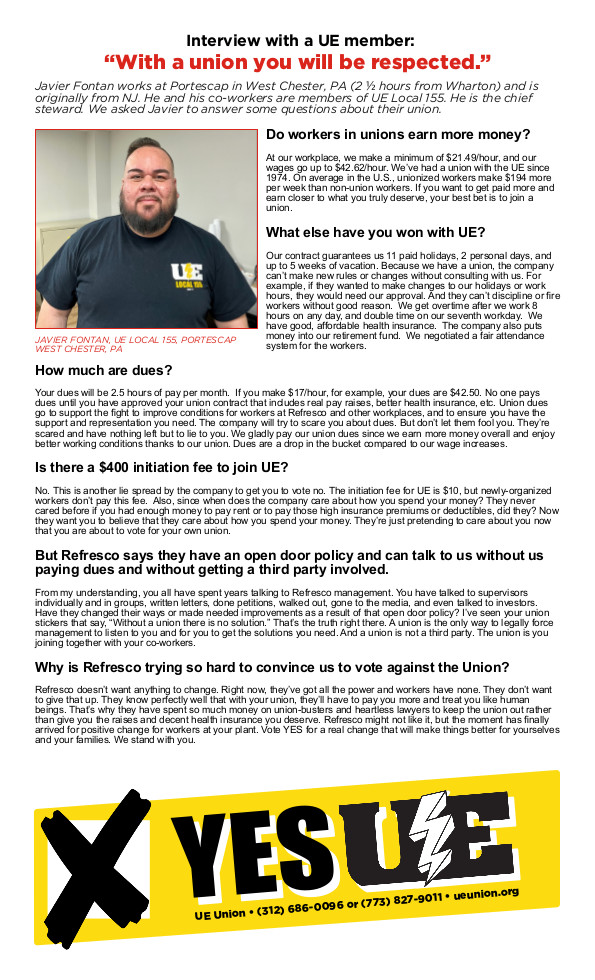 When the company spread misinformation about UE Local 506’s 2019 contract with Wabtec, union members distributed the actual wage scales in the contract — which were far above what Refresco workers make. One UE flyer included an interview with Javier Fontan, a member of UE Local 155 who works at Portescap in West Chester, PA, about two and a half hours away from Wharton, and who is originally from New Jersey. Fontan dispelled myths about UE that the company had been promoting, such as that if Refresco workers voted for the union, they would have to pay a $400 initiation fee (Local 155’s initiation fee is $10). He explained how UE dues work, and that the company “know[s] perfectly well that with your union, they’ll have to pay you more and treat you like human beings. That’s why they have spent so much money on union-busters and heartless lawyers to keep the union out rather than give you the raises and decent health insurance you deserve.”

UE was so successful at getting information to workers via text that the company instructed workers to turn off their phones until the election — a move that many workers saw as condescending and an insult to their intelligence.

In April, the company claimed that they couldn’t give out their annual April bonus because of the union, but this ploy backfired. The company told workers that they would give them Good Friday as a paid holiday, but then changed their mind a week before. They unfairly disciplined one of the most vocal anti-union workers, turning her into a union supporter.

UE leaders also used text and Whatsapp messages to distribute video messages to their co-workers. When Refresco was awarded the Dirty Dozen award, Refresco worker and UE leader Lida Guevara spoke at the live streamed event announcing the award. A recorded video of her testimony helped get the word out in the plant.

During the Eastern Region council meeting, held in April in nearby Denville, NJ, members of UE locals from Massachusetts to Virginia traveled to the Refresco plant to record solidarity videos. UE’s allies in Mexico, the Frente Auténtico del Trabajo, also recorded a solidarity video, urging workers not to believe the company’s lies and to vote yes for the union.

The UE committee reached out to every worker and fought for every vote. As the election approached, UE leader Licinia Ochoa told reporters from More Perfect Union, “There’s a bunch of folks that voted no the first time that now want to vote yes. They’re so excited and can’t wait for the election to come.” Several workers noted that they came around to supporting the union out of sheer admiration for the union’s unwillingness to give up.

Ultimately, the union prevailed by a vote of 113 to 88 in the second NLRB election, which was held on May 19 and 20. In a positive sign, this time around the company did not contest the election results, and UE was certified, again, as the representative of Refresco workers at the end of the month.

Reflecting on the long struggle, Diana Acevedo said, “You don't choose how to lose, but you can choose how to try again and prepare to win the next time. We are very optimistic and confident that with this victory better days will come for Refresco workers.”

“Justice has been done,” added Jose Cepeda. “Humility and perseverance have triumphed once again against the pride and arrogance of a selfish and inhumane power.”

“This victory is the product of the work of a whole group, of a whole bunch of co-workers who fought together for something that we deserve,” said Cardona.

"Each one of us should feel proud that once again we won the elections in favor of our union,” concluded Ochoa. “That is why united we will always achieve victory and from now on we will achieve a contract with good benefits for every Refresco worker. That is why we must follow the motto ‘In unity there is strength.’”