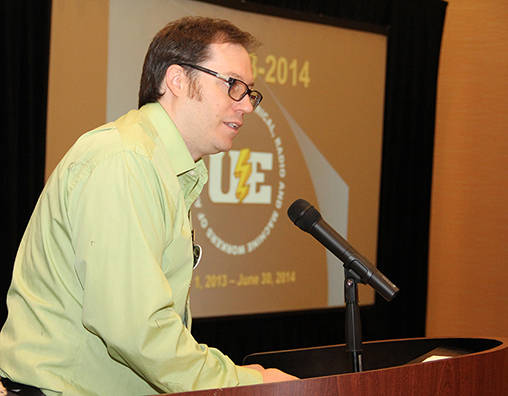 The Wednesday morning session of the 74th UE Convention on August 19 discussed and voted on a series of resolutions. Secretary-Treasurer Andrew Dinkelaker also gave a detailed financial report and answered delegates' questions on the union budget.

The policy resolutions dealt with were: Effective Collective Bargaining, Independent Political Action, Protect and Improve Our Retirement Security, Healthcare for All. The convention also heard, discussed, and approved the Report of the Policy Action Committee, which selects major priorities for the entire union to focus on, from among the many policy resolutions. The policy action program adopted at the convention focuses on independent political action, healthcare and retirement security.

McCracken highlighted the resolution’s call for effective communications with members. “The best way to piss off your membership is to keep them uninformed.” Ferritto talked about some local politicians in Erie who backed away from supporting Local 506 and refused to attend its big rally when they saw that the union was serious about standing up to GE. Now they are paying a political price because “they decided to stand on the side of GE rather than the workers.”

Speaking on “Independent Rank-and-File Political Action,” Scott Slawson warned of the threat of the TPP trade deal. Elizabeth Nikazmerad, Local 255, offered two amendments to the resolution, one to equally blame Republicans and Democrats for union busting, and the other to remove a favorable mention of Bernie Sanders. After several delegates spoke for and against, each amendment failed.

David Betsworth, Local 893, spoke on how his local does rank-and-file lobbying of state legislators. He also described the effort the previous day by four officers of his local, including him, to meet with officials of the federal Centers for Medicare and Medicaid Services in the Baltimore area, to convince them not to approve the plan of Iowa’s governor to privatize Medicaid and wipe out many Local 893 jobs. After being an appointment, the Local 893 leaders decided to go anyway. They had to get through many hurdles, including phalanxes of armed guards, but they eventually got a 45-minute meeting with two deputy directors, who told them the Iowa privatization was “not a done deal.” Betsworth concluded that we fight a lot of battles, “some you win, some you lose. We consider this a win.”

Following approval of the political action resolution the convention went into a closed session in which Secretary-Treasurer Andrew Dinkelaker gave the financial report.

Delegates then heard, discussed and approved the Policy Action Report, which identified independent political action, healthcare, and retirement security as top action priorities. Christine Brown, Local 208 and Scott Slawson spoke on the importance of the retirement issue. “Use this in your locals, as we do in Local 222,” said Marie Lausch. “Go over it with your members. It’s not a dead document. Look at it every few months.”

Next was the resolution, “Protect and Expand Our Retirement Security.” Several delegates spoke in favor of preserving and expanding Social Security and lifting the income cap on the Social Security tax to make high earners pay their fair share and ensure the viability of the program for many decades to come. Sharry Niedfeldt, Local 1161, said that with politicians proposing to raise the retirement age, she can’t imagine how long her kids and grandkids will have to work to get full Social Security. “Corporations need to pay their fair share.”

“Healthcare for All” was the final resolution of the morning session, and it includes a brief critique of the current healthcare system, calls for a single-payer national health insurance system, lays out some principles for locals bargaining over health insurance, and calls for defense of Medicare, Medicaid, and VA health benefits for veterans. Emma Paradis, Local 255, and Elizabeth Nikazmerad, Local 203 talked about Vermont locals’ fightback against their governor’s betrayal of single payer. Tamyra Levick, Local 208, said the elderly get nothing for free. “There’s something wrong with a system that is not taking care of the elderly, children and the working class.”

Nathanette Mayo, Local 150, and Joni Anderson, Local 1107, said we need to pursue the fight for paid sick days for all working people. Kevin Yancey, Local 150, made an impassioned plea for veterans. “We send people off whole to fight wars they shouldn’t be in. They come back in pieces, or in bags. Our system does not take care of vets. You see so many homeless vets.”