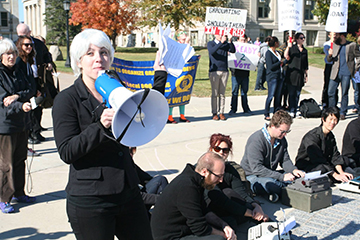 At the end of a tough seven-month battle, fought with creative tactics and enthusiastic membership involvement, UE Local 896 won a new two-year contract with the University of Iowa that achieves partial reimbursement of student fees and extends 100 percent tuition scholarship to graduate employees in the College of Education. The contract also provides wage increases of 1 percent the first year, 3 percent the second year; blocks concessions sought by the administration; and lowers health premiums for single parents.

UE Local 896/Campaign to Organize Graduate Students (COGS) represents 2,300 graduate teaching and research assistants at the University of Iowa. COGS’s most significant achievement in its 18-year history has been winning, over several contracts, a full tuition scholarship benefit. All members of the bargaining unit are graduate students completing doctoral, master’s, and professional degrees. Before the union organized, the university forced graduate employees to pay back thousands of dollars in tuition out of their meager salaries. As COGS phased in the tuition scholarship, the university began undermining the scholarship by charging mandatory fees, a form of back-door tuition.

On top of student activities fees, student services fees, and student health fees, the university added building fees, a fee for renovations, cultural fees, professional enhancement fees, and a fee for a new recreation center with a climbing wall. By 2014, graduate employees were paying nearly $1,000 in fees each year, a 500 percent increase in less than 15 years.

In a May 2014 bargaining survey, Local 896 members named relief from fees as their top priority, but the union faced obstacles in achieving that goal. Public employees in Iowa do not have the right to strike, and interest arbitrators rarely award new benefits that the parties have not previously negotiated. In addition, the Iowa Board of Regents had insisted that fees are not a mandatory topic of bargaining under Iowa law and refused to negotiate over fees in the past.

COGS has one of the best collective bargaining agreements for graduate employees among Big Ten universities, and the union felt it should try to break new ground for graduate employee unions across the country. At the annual CGEU (Coalition of Graduate Employee Unions) conference in August, Local 896 President Jeannette Gabriel urged other unions to make fees part of a national campaign.

COGS officers decided that an aggressive public campaign would be needed to win this fight. The union started the first week of the fall semester with a press conference at which it released a white paper titled, “Financial Insecurity for Graduate Students Contributes to Debt and Poverty”. The paper highlighted the fact that 33 percent of graduate assistants have 25 percent appointments, or just 10 hours of work per week, and make only $9,040 a year, well below the federal poverty line of $11,670 for a single adult. Fees add up to more than a full month’s salary for these workers, and because fees must be paid before they receive their first paychecks, they are a significant source of student debt.

Graduate employees conducted roving actions across campus. Teaching assistants asked their department chairs and administrators to support COGS’s fees campaign and to call the deans of their colleges to express concern about graduate student fees. The math department faculty voted unanimously to support the union’s demand for fee reimbursement.

Local 896 tapped into national media attention on the high cost of college and student debt as the focus of a major fall semester contract rally. This enabled the local to build support among undergraduate students and to put contract demands in a broad social justice context. The Board of Regents would meet on the UI campus in late October one week before the start of negotiations and the November election, to propose tuition and fee rates for the 2015-2016 academic year.

Weeks before the Regents meeting, University President Sally Mason, one of highest-paid administrators in the country, told an audience full of graduate students that she thought most student debt was “lifestyle” debt because students these days spend too much money on iPhones, iPads, and laptop computers, and students expected to be poor back when she was in college.

This became the theme of the “Rally Against Student Debt”, as Chief Steward Mish Zimdars unleashed a series of flyers depicting “Sallie Mae$on’s Lifestyle Tips”. “Why pay more than $60 per month for a cell phone, when you can train a carrier pigeon practically for free?”  “Save nearly $1,000 by buying a typewriter instead of a laptop computer.” Sallie Mae$on made an appearance at the COGS rally as hundreds of students gathered with thrift store typewriters and signs that read, “I AM NOT A LOAN” to demand a tuition freeze and fees reimbursement.

The rally received state and national media coverage, and the next day the Republican chair of the Board of Regents reversed course on a proposed 1.75 percent tuition increase and publicly said he would support a tuition freeze. In reality, Republicans didn’t want to hand Democrats a popular campaign issue right before the election. The tuition freeze put $14.5 million back into the hands of undergraduate students at Iowa Regents universities, and showed the university administration that COGS could wield political influence.

As bargaining began, COGS proposed full fees reimbursement, a 100 percent tuition scholarship for all colleges within the university that have higher tuition rates than the College of Liberal Arts & Sciences, 4.5 percent salary increases in each year of the contract, job security through degree completion, increasing employer contributions to family health insurance, and paid parental leave. The Regents retaliated by proposing to cut the tuition scholarship in half for graduate assistants with quarter time appointments, no fees reimbursement, 0 percent salary increase, a five-year cap on employment eligibility, and reductions in paid leave. Fifty COGS members peppered the Regents attorneys with questions at management’s initial proposal, demanding to know, among other things, why the university wanted to eliminate the human rights policy from the contract.

The union released another white paper in December, “Tuition by Another Name: Student Fees Lack Transparency and Contribute to the Student Debt Crisis”. The paper exposed the administration’s refusal to provide detailed public information on how they were spending millions in fees revenue. As a result, an editorial by the Des Moines Register called for transparency on fees and urged legislators to consider fees in discussions of state appropriations to the Regents Universities.

Still insisting that they didn’t have to negotiate over fees, the Regents filed a petition with PERB (Public Employment Relations Board, the state labor board) seeking a ruling on whether fees were a mandatory subject of bargaining. The union fought the case aggressively, and PERB issued a preliminary ruling in January in the union’s favor, determining that the union’s fees proposal was a mandatory subject of bargaining.

When negotiations resumed at the start of the spring semester, the Regents initially offered a flat dollar amount on fees. The COGS bargaining team insisted on a percentage, and the university proposed 25 percent fees reimbursement. After several more sessions it was clear that the university would not agree to full fees reimbursement in one contract, but COGS President Jeannette Gabriel used this to move another top bargaining priority. She told the administration that the only way the union would trust the administration to make gradual progress on fees would be if they extended full tuition scholarship to graduate employees in the College of Education. Just as COGS achieved a full scholarship at the College of Liberal Arts rate, the University had increased tuition in the College of Education to a higher rate, leaving them with thousands of dollars in bills each year. College of Education grad students have been joining the union and fighting tuition increases ever since. This contract finally makes them whole.

At the last negotiations session, 50 COGS members again flooded the room, making their resolve known to the administration. The final agreement – unanimously ratified by the membership in mid-February – provides 25 percent fees scholarships for all bargaining unit members and 100 percent tuition scholarships for the College of Education, as well as salary increase both years. UIGradCare premiums for single parents will be reduced by rolling them into the family plan. The union successfully fought back concessions, including university efforts to reduce leave, pro-rate the tuition scholarship for quarter time graduate employees, and an attempt to remove the human rights policy from the contract. The battle will continue, through coalition building, to achieve better health insurance for families and transgender employees as well as parental leave.