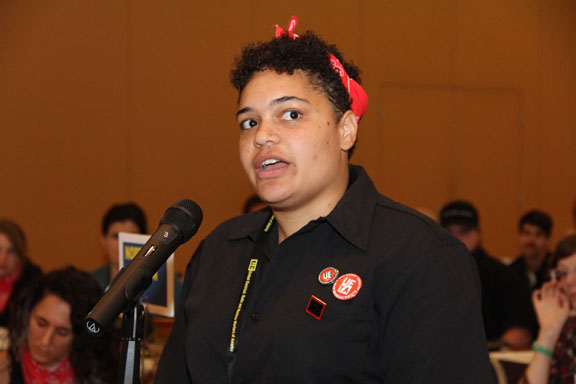 Monday morning, August 17, was the second session of UE's 74th National Convention, and it featured extensive discussion on resolutions including Oppose Right to Work, Stop Privatization, Collective Bargaining Rights for Public Employees, Fight Racism and Still Fighting to Advance Women's Rights, all of which were approved. Delegates also heard from two guest speakers: President Larry Hanley of the Amalgamated Transit Union, who has revitalized that union and built alliances with transit riders to defend and strengthen public transit; and Rep. Donna Edwards (D-MD), a strong labor ally in Congress.

Appropriately, delegates got down to business with a discussion of one of the biggest current threats to the workers’ movement in the U.S., the so-called “right-to-work” attack on unions. The resolution notes the spread of RTW legislation to Wisconsin, Indiana and Michigan and the pending threat in West Virginia, Missouri and other states, due to the influence of the right-wing corporate legislation mill ALEC (the American Legislative Exchange Council) and the Koch brothers. A pending Supreme Court case, Frederichs v. California Teachers Association, threatens to impose RTW on all public sector workers in the country. The resolution calls for work to defeat RTW and intensified efforts to strengthen locals and build membership where we’re subject to RTW laws.

Speaking on the “Stop Privatization” resolution, Becky Dawes said her Local 893 has been fighting privatization for many years, and is currently trying to stop Iowa’s governor from privatizing Medicaid. Marie Lausch, Local 222 and Mike Wells, Local 267, described their local’s fights against privatization. Also speaking on the resolution were Christine Brown, Local 208; Scott Slawson, Local 506 and Kathleen Coonrod, Local 203.

International President Larry Hanley of the Amalgamated Transit Union (ATU) addressed the delegates. He said his union has made it a priority to build alliances with transit riders, a social movement to defend public transit and other public services. ATU has also put increased resources into training local officers and activists.

He talked about his admiration for UE and thanked UE for publishing Labor’s Untold Story, which his union uses extensively.

Hanley discussed the police shooting of Michael Brown in Ferguson, Missouri in 2014 which sparked the Black Lives Matter movement. The shooting of Brown occurred at a time when the St. Louis Transit Authority was using racism against the ATU local there, trying to divide white mechanics from black drivers. This is institutional racism, he said. On the 2016 presidential race, Hanley said “The only real energy has been for Bernie Sanders,” and warned that the labor movement must not be used to “shut down the only candidate who shares our values.” On the wars of the past 15 years, he said, “We would have no war if the politicians had been honest about how much it would cost the American people,” both in the trillions of dollars expended but also in the loss of lives of our troops.

The second guest speaker of the morning was Congresswoman Donna Edwards (D-MD), who is also a candidate for the U.S. Senate in the 2016 election. She was critical of fellow Democrats for not putting forth a clear agenda. The Employee Free Choice Act (EFCA), to make union organizing easier, failed when, she said, “Democrats walked away from it.” Woman and African Americans are mainstays of the Democratic Party, but are underrepresented in Congress.

She expressed her opposition to TPP and other “free trade” agreements which she said are about “trading away American jobs”, with workers and unions given no say in negotiating these agreements. “If you’re not at the table, you’re definitely on the menu.” Having listened to some of the discussion by UE delegates on resolutions, she told them that UE’s policies “give voice to the struggle.”

Numerous delegates made thoughtful and heartfelt comments, many from personal experiences, on the resolution “Fight Racism”. Brian Barrington, Local 1421, said his commitment to fighting racism goes back to his childhood when he heard a neighbor disparage his Japanese-American friend. Ricky Steele described how Local 506’s Unity Council has helped mitigate racial conflicts, although racism has not ended in the local. Senowa Mize-Fox, Local 203, who is biracial, described racial conflict in her own family, and an incident the evening before in the streets near the hotel when she was racially profiled by the police.

Shirley Harrison, Local 1135, said we all need to challenge racism when we encounter it in our daily lives, such as co-workers telling racist jokes. White members need to understand the anxieties black parents feel, knowing that their children can all-too-easily become the victims of the police. Ron Russell, Local 1077, talked about growing up in a racist environment in northern Idaho and striving to overcome that background. Also speaking on the resolution were Chris Wolford, Local 170; Diamond Almendarez, Local 1008; OJ Hammond, Local 683; Cettina Costagliola, Local 255; Bill Sutton, Local 155; Elizabeth Nikazmerad, Local 203; Mike Rivera, Local 1421; Angaza Laughinghouse, Local 150; and Marie Lausch, Local 222.

On the resolution, “Still Fighting to Advance Women’s Rights,” Eastern Region President Deb Gornall spoke about the history of her local, Local 618 at Erie GE, fighting for equal pay for women and against other forms of discrimination. Jeannette Gabriel, Local 896, commented on additions made by the Resolutions Committee, including a provision to provide childcare at union meetings and conferences, and calling for a women’s caucus. Bonita Johnson, Local 150, called for more protection of women’s safety on the job.

See many more photos from the UE Convention at UE's Facebook page.