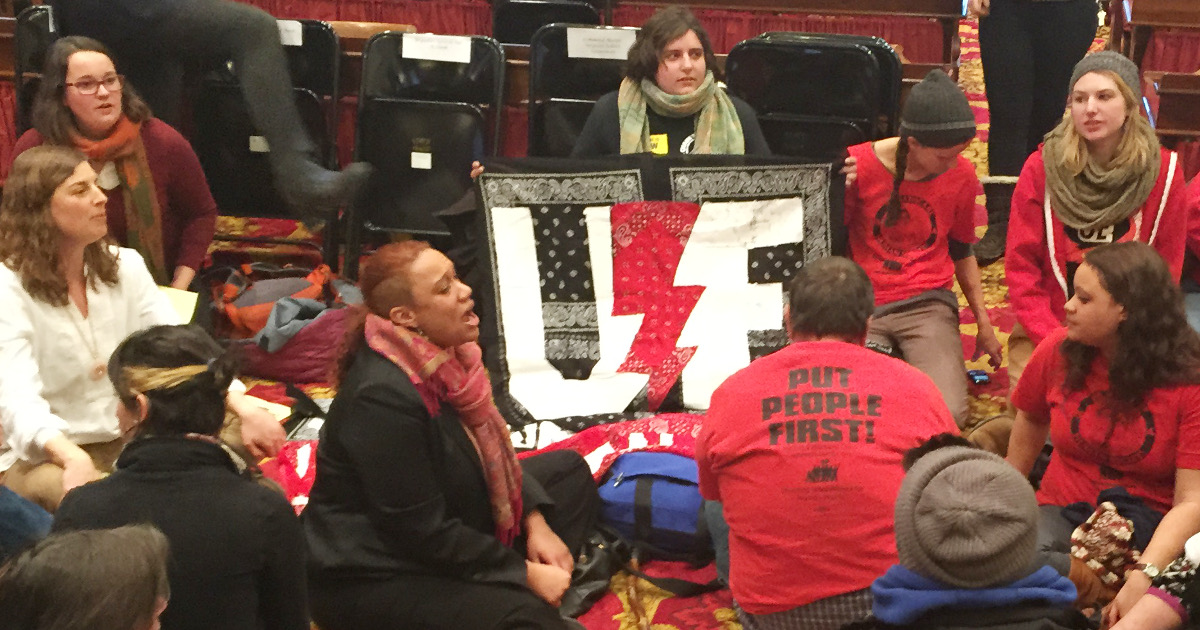 On January 8, a bitter cold Vermont winters day, more than 100 union and community members, including activists from the Vermont Workers Center and more than 20 UE members, marched on the state capitol building for the governor’s inauguration and state of the state address. Later many of them occupied the state legislature in the fight for single-payer healthcare.

In mid-December, Democratic Governor Peter Shumlin betrayed his promises to the people of Vermont in both of his election campaigns and during his first term by dropping his support for establishing single payer healthcare in the state. In 2011, after many years of campaigning by labor and other single payer activists, the legislature passed Act 48 requiring the state to establish single payer, to be called Green Mountain Care. Last November Shumlin narrowly won reelection, campaigning on his support for Green Mountain Care. But soon after the election Shumlin unveiled his financing proposal, designed to load the costs on Green Mountain Care onto the backs of working people, a move designed to turn public opinion against single payer. Then a month after his reelection, Shumlin announced his recommendation that Green Mountain Care be axed, declaring “now is not the time” to provide healthcare to Vermonters.

The Healthcare is a Human Right movement in Vermont has not backed down, and a number of activists decided that it was time for some civil disobedience in the state capitol to show that this fight is far from over.

With UE Young Activists in the lead, an organized crowd entered the statehouse and filled its halls. UE members marched to the office of House Speaker Shap Smith to deliver a UE statement demanding that single payer be implemented without delay. Despite the governor’s rigged numbers, UE believes that single payer can be implemented without co-pays or deductibles, and financed by taxes on corporations and the rich.

After delivering their demands, UE members headed toward the legislative chamber, singing, chanting, and raising clenched fists, until the chamber was closed and the governor began giving the state of the state speech. During the speech protestors unfurled two banners and chanted.  After finishing his speech, which completely avoided the healthcare issue, the governor quickly escaped through a back door to avoid any interaction with his dissatisfied constituents.

Protestors then poured onto the floor of the assembly chamber and sat down. Ryan Macdonald of Local 234, Fairbanks Scales, explains why he participated. “Everywhere I look I see people being exploited for financial gain. Everywhere I listen, I hear people complain about the untenable situation we are in.” He asked, “Who do we look to to make change? We can’t trust the bosses or the political establishment. I looked to myself and my brothers and sisters in the UE and stood up by sitting down.”

Demanding that the legislature hold a public hearing about the status of Green Mountain Care, the occupation lasted into the night, persisting through the pleas and demands of legislators and police to disperse. The sit-in was heavily covered by the local and national media, and highlighted on the progressive news broadcast Democracy Now!

Local 203 President Elizabeth Nikazmerad said: “What can workers do when our bosses tell us they won't give us paid sick days or a livable wage?  When our requests for good healthcare fall on deaf ears?  We organize, unionize and fight back! What must the workers of Vermont do now that Governor Shumlin has decided for us that "now is not the time" for single payer healthcare?  Organize and fight back! The workers of Vermont cannot sit back and wait for a day when our elected officials finally decide to represent us. We must stand together to take back our voices, to use our power and demand that the Governor either stand with us in support of fair and equitable healthcare today or get out of our way.”

By the time the sit-in was ended by the state police, 29 people had been arrested. They included three courageous UE members, two of them Young Activists: Emma Paradis, Local 255, Elizabeth Nikazmerad, Local 203; and Ryan Macdonald of Local 234.