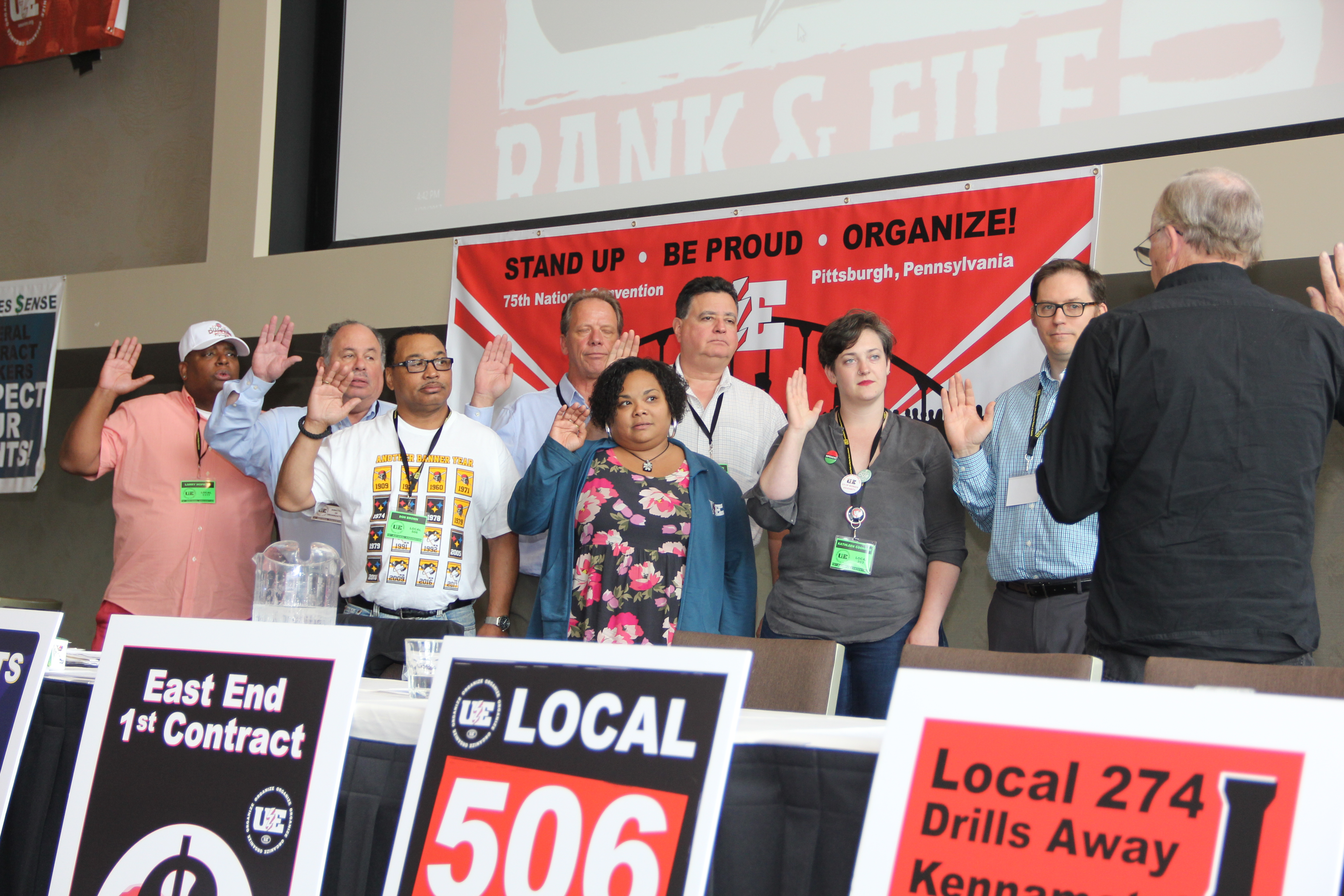 Officers and Trustees are sworn in
August 30, 2017
Pittsburgh

President Peter Knowlton opened the Wednesday afternoon session by introducing a series of amendments to the “Independent Rank-and-File Political Action” resolution suggested by UE Young Activists during the lunch break, to clarify UE’s commitment to independent political action for the working class.

Chris Wohlford, Local 170; Joni Anderson, Local 1107; and Mike Wells, Local 267 all spoke on the resolution, emphasizing the importance of being active politically and independent of the two-party system. Delegates then overwhelmingly approved the resolution.

Secretary-Treasurer Andrew Dinkelaker then reviewed the union’s finances, noting UE’s “legacy of being there on the front lines of struggle” and commitment to doing whatever it takes to win justice for UE members. He answered questions from Ron Pena, Local 1008; Scott Slawson, Eastern Region and Local 506; Mike Ferrito, Local 506; Armando Robles, Local 1110, Sharry Neidfeldt, Local 1161; and Joni Anderson, Local 1107.

Becky Dawes, Western Region and Local 893, nominated Andrew Dinkelaker for another term as Secretary-Treasurer, which was seconded by Robert Smith, Local 712. Delegates approved a motion to cast one ballot for Dinkelaker, who also spoke briefly, noting that while the union faces challenges, “we’ll do this together!”

Scott Slawson, Local 506, nominated Gene Elk for another term as Director of Organization. The nomination was seconded by Marie Lausch, Northeast Region and Local 222. After being reelected, Elk told delegates, “comrades, I am really excited because we have a great future ahead of us. We are going to go out there and we are going to organize new members all over North America. We are taking our crisis and building a new union movement.”

Knowlton then took nominations for three trustees and three alternate trustees of the national union, one of each from the three regions. The nominations were made by the regional presidents: Donna Morgan, Eastern; Carl Rosen, Western; and Ray Pompano, Northeast. The new trustees are Don Brown, Local 506; Autumn Martinez, Local 255; and Larry Hopkins, Local 1177. Alternates are Chris Wolford, Local 170; Kathleen Coonrod, Local 203; and David Betsworth, Local 893.

President Knowlton administered the oath of office to the new officers and trustees, and then brought the entire General Executive Board to the stage.

After the elections, President Knowlton brought the conveners of the Constitution Committee to the stage: Ray Pompano, Northeast Region; Scott Slawson, Eastern Region and Local 506; and Bryan Martindale, Western Region and Local 1421. Several constitutional amendments, which provided modest pay increases for officers and staff, and continued the transformation of UE’s per capita structure towards a progressive formula based on members’ hourly rates, were approved.

End Discrimination Based on Sexual Orientation and Gender Identity

Delegates then considered the final resolution of the day, “End Discrimination Based on Sexual Orientation and Gender Identity.” Larry Hopkins, Local 1177, rose first to speak, speaking against discrimination, especially in the military. Mary Anderson, Local 808, related how a young woman in her shop timidly approached her to ask, “can I be fired if they find out I’m gay?” and how happy she was to be able to tell her co-worker that they had bargained protections against discrimination in their collective bargaining agreement.

Elizabeth Jesdale, Local 255 and Kathleen Coonrod, Local 203, spoke about the importance of using gender-neutral language to make sure all UE members feel included in our union family. Jesdale suggested a number of gender-neutral options, including “y’all, friends, comrades, co-workers, and while we’re in Pittsburgh, yinz.”

Delegates approved the resolution unanimously and President Knowlton adjourned the convention for the day.