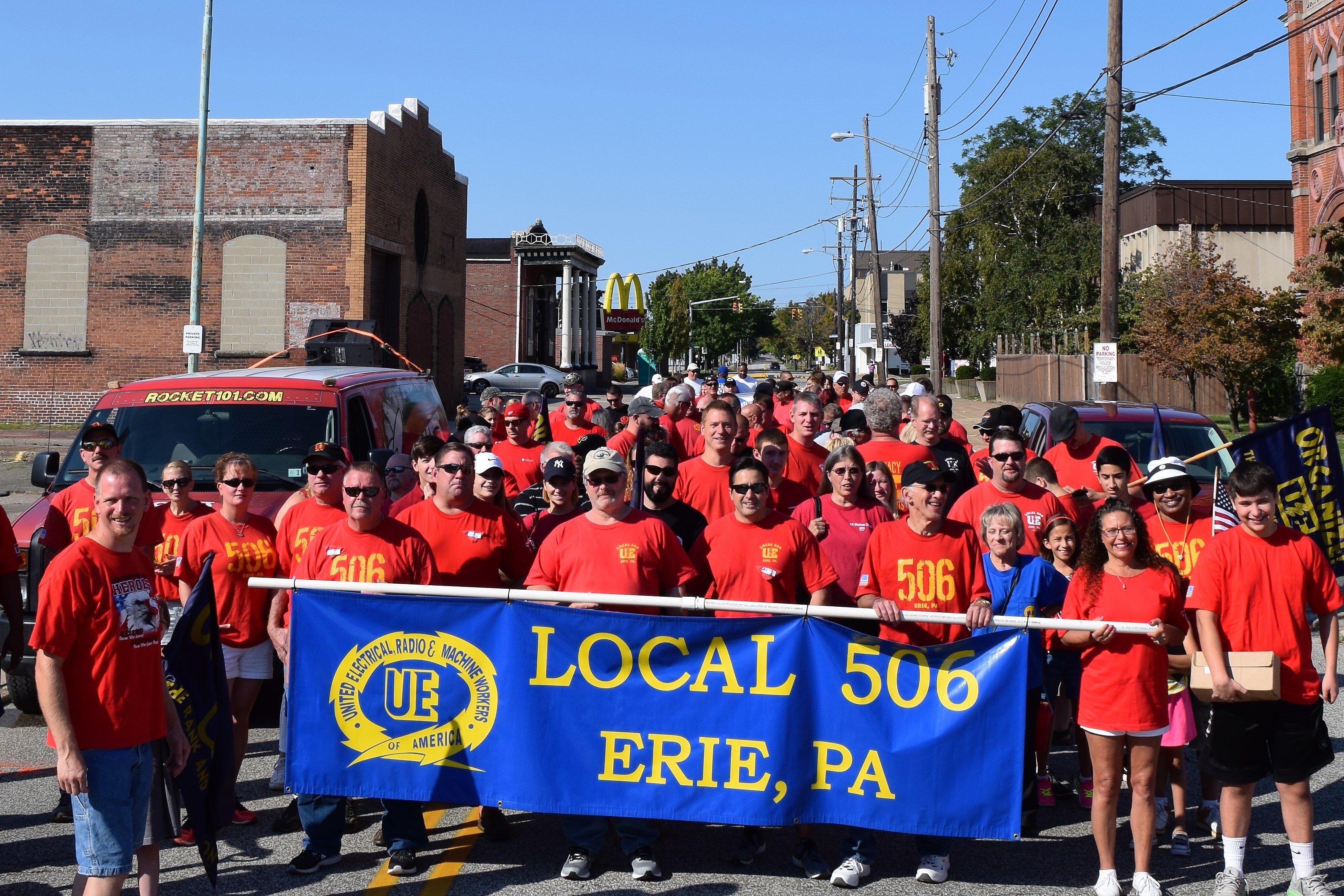 As one part of its struggle against GE's announced plan to move even more work out of the Erie plant, UE Local 506 commissioned an economic impact study by the firm Parker Philips. The union announced the results of that study today with the following press release. Click the link at the bottom to download the full report.

(August 8, 2017) ERIE— An economic impact study commission by UE Local 506 shows the loss of 1,687 total jobs transfers from Pennsylvania.  The 1,350 direct jobs transferred from Erie County (assuming 80% of workers live in the county), since 2013, will result in a total loss of 4,095 jobs across all sectors in the local economy.  The total transfer of work since 2013 will result in a $1.6 billion in total economic output lost ($1.1 billion direct) in the Erie County economy.

The job loss will nearly double across the commonwealth with 8,124 jobs affected across multiple areas of the economy. The total transfer of work since 2013 will result in a $2.7 billion in total economic output lost ($1.4 billion direct) in the commonwealth.

The impact of the job loss will have a ripple effect across the entire Commonwealth according to the study conducted by Parker Philips, a firm specializing in economic impact studies, headquartered in Erie County, Pennsylvania.

“The impact to Erie County’s economy is staggering,” said Erie County Executive Kathy Dahlkemper.  “We are working hand-in-hand with UE Local 506 and our local economic development agencies to market this elite workforce to the next generation of Erie companies.

“Erie County is a one-of-a-kind place to call home, and our highly skilled, generational workforce—which has helped to support phenomenal manufacturing growth and innovation over the past century—is up for the job.”

Though impossible to measure, the emotional toll of the job transfers coupled with recent layoffs has had a real impact on the region and GE workers.

“In nearly 80 years of successful contract negotiations, the members of UE Local 506 have not asked to reopen a ratified contract, while GE has done so during the past three contracts, resulting in the preservation of too few jobs to note,” said Scott Slawson, President, UE Local 506. “Our resources may be better spent working to attract new companies to Erie County in search of an elite workforce, highly trained and capable of helping them earn record profits. Our members can build anything.”

Beyond the loss of 1,687 job transfers, which are the focus of the report, there are 1,707 UE Local 506 Members, displaced through layoffs and attrition. A snapshot today of how the combination of displaced workers and job transfers affects the local economy is also outlined in the report. When totaling the two segments the impact is extraordinary: 8,244 jobs impacted with a loss of $3.2 billion to Erie County economy. In Pennsylvania, the total job losses are 16,189 and $5.4 billion.

Sectors impacted include the service and retail sector, healthcare, wholesale trade, and transportation. While the majority of job losses occur in the railroad manufacturing sector, the loss of wages and spending power of jobs transferred will ripple throughout the entire Pennsylvania economy.