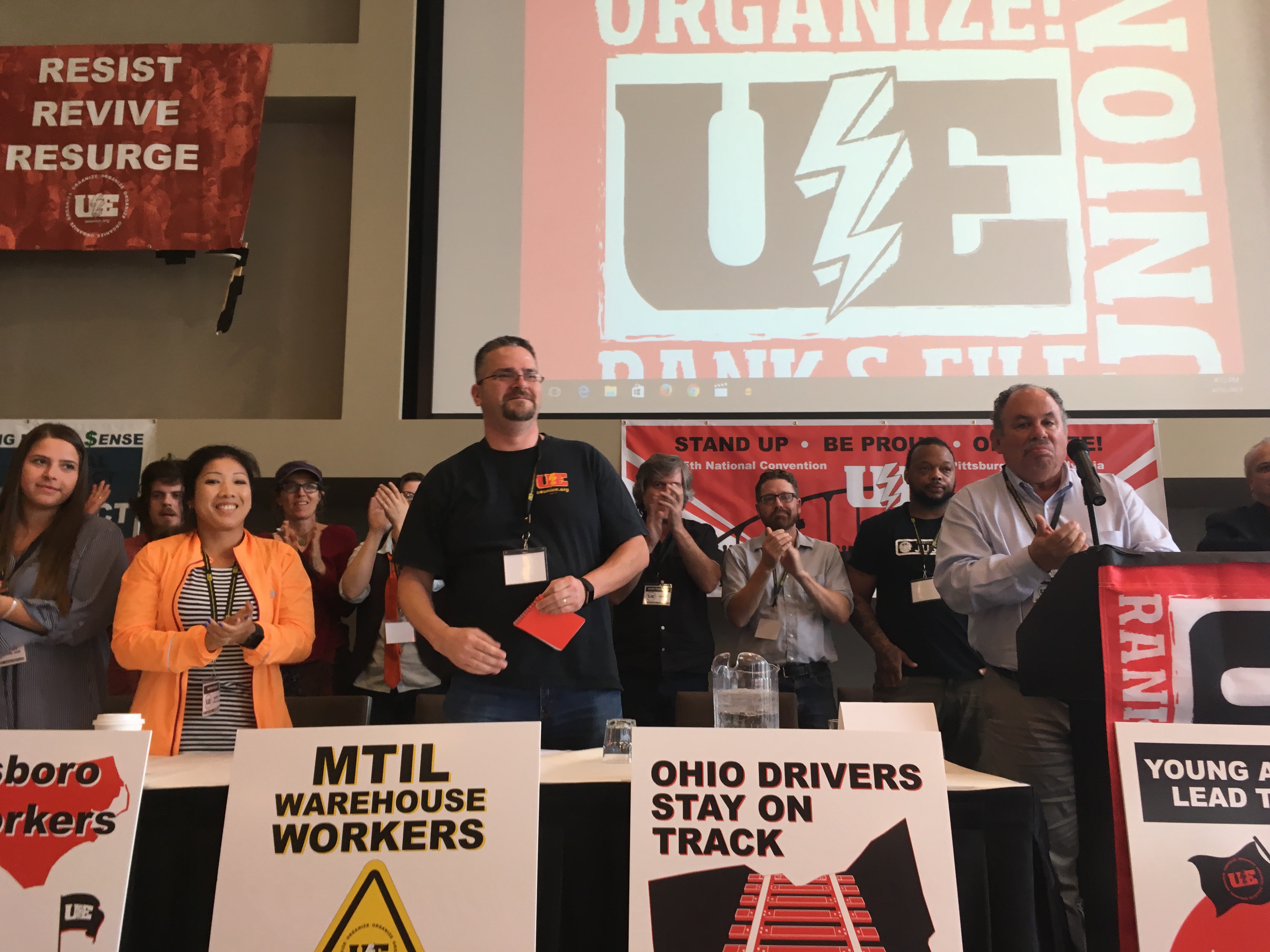 Elk declared that “the labor movement has been under a furious attack from the bosses and extreme right wing, newly emboldened by both the collapse of the Democratic Party and last November’s election of Donald Trump.  The rise of income inequality and the Democratic Party’s refusal to address the destruction of family supporting jobs in manufacturing, public employment, and other sectors allowed right wing demagogues to exploit the frustrations of many working-class Americans.

“The lesson for us is clear and unmistakable. Neither Republicans nor Democrats can be trusted to fix the ever-growing chasm between the income of working people who create wealth and the bosses who live off of the profits that our labor produces. Now more than ever, working people need independent militant trade unions which are controlled by the members to bring about real and lasting improvements.  We have to rebuild the trade union movement and we have to organize thousands of new members – that’s the only way to create family-sustaining jobs and to reverse the great income inequality which the bosses and corporations have imposed upon us.”

UE is doing its part, Elk said, by organizing hundreds of new members in the last two years, in New Hampshire, Illinois, Pennsylvania, Ohio, West Virginia, and North Carolina. He recognized the hard work of the UE staff, and noted that UE Young Activists and other rank-and-file members played a prominent role in almost all UE organizing campaigns. Elk called to the stage the young activists participating in the convention, and delegates gave them a standing ovation as they marched to the stage.

Elk then introduced Field Organizer Dante Strobino, who gave background on Local 150’s efforts to organize municipal workers throughout North Carolina, where it is illegal for public employees to engage in collective bargaining. Strobino introduced Charles French, leader of the new Local 150 chapter for city workers in Greensboro, the state’s third-largest city. French spoke about how the chapter successfully organized to win dues checkoff, significant wage increases, especially for the lowest-paid workers and revocation of a ban on city workers’ free speech rights.

Precarious Workers Fight for Justice on the Railroads

Elk then turned to the struggle of railroad crew drivers in Ohio and across the U.S. who have been organizing for social and economic justice, noting that “it’s a difficult struggle, because crew drivers used to be regular railroad employees, until the big railroads outsourced the work to subcontractors, who then imposed low wages, inferior benefits, and irregular work schedules.”

But UE is fighting back and now represents more than 1200 drivers across the U.S. and is building alliances with other unions like the Steelworkers and SMART (Sheet Metal and Railroad Transport Union), who also represent hundreds of workers in this industry.

Since late 2015, when UE first negotiated a national contract covering Hallcon (formerly Renzenberger) workers and established a Rail Crew Drivers’ Conference Board to coordinate the activities of almost 1200 members nationwide, UE has won a series of organizing campaigns at five railroad yards in Ohio – Crestline, Cleveland, Cincinnati, Youngstown, and Columbus – adding about 100 new members to UE Local 716.  Local 716 is a newly-chartered amalgamated state-wide union which represents workers in the rail-crew hauling industry.

But, just as bargaining had begun on the local wage increases required under the Hallcon-UE National Agreement, Local 716 members learned that the company lost a sizable chunk of its crew-hauling contract with the Norfolk Southern (NS) railroad to a rival contractor, PTI, which promised to supply crew-hauling services to NS on an even cheaper basis than Hallcon.

Elk then described how UE’s friends and allies from Warehouse Workers for Justice (WWJ) in Chicago came across a determined group of 100 workers who were suffering with low wages, too few benefits, and a rash of continuing safety problems.  Their company, MTIL manufactures pallets and skids for a Dutch multinational, IFCO. With support from WWJ, a UE organizing drive quickly built a strong membership base in the warehouse.

MTIL workers with help from both UE and WWJ staff are continuing to stand up to the worst kind of union-busting imaginable.  Just a few days before an NLRB election scheduled for December 19 last year, MTIL committed massive labor law violations in which it attempted to either buy off or terrorize workers to defeat the UE campaign, including firing the leader of the UE in-plant organizing committee, Bobby Frierson.

WWJ staff Sean Fulkerson spoke briefly about the campaign, and then brother Frierson shared with delegates how MTIL workers organized with UE for fair treatment and to win the right to have paid holidays, vacations, improved wages, and real safety protections. He described how MTIL workers were forced to climb inside machines to clear out jams, and how they almost lost a co-worker when management started a machine with their co-worker still inside.

The National Labor Relations Board (NLRB) is seeking a 10J bargaining order and injunction requiring the company to recognize and bargain with UE while reinstating Bobby Frierson. Decisions on NLRB charges and the Federal injunction are pending, but UE is continuing to building the union’s base in the shop and getting ready to start bargaining.

Elk then reported on the struggle of East End Food Coop workers in Pittsburgh to secure union wages, fair treatment, and a real voice in their workplace.  UE National Office Administrative Assistant Lyndsey O’Day, a former member of UE Local 203 at City Market in Burlington, VT, started the campaign by speaking to co-op workers in the store.

East End Food Coop workers had come up short in three previous campaigns with other unions, but after building support for the union utilizing one-on-one, face-to-face conversations with their co-workers, the workers prevailed in a vote of 47 for UE, 4 for no union, and 1 for another union, establishing new UE Local 667.

Elk introduced International Representative John Thompson, who praised the instrumental role in the campaign and bargaining of rank and file members from Locals 203 and 255 in Vermont who work at food coops in that state.

Megan Moffet, Local 667, described how East End Food Coop workers built support for the union and negotiated a solid collective bargaining agreement in March of 2016. She recalled an old Gaelic proverb, “when one cow breaks the fence, twelve will leave,” and urged UE members to “keep breaking the fence.”

Last but certainly not last, Elk reported on UE’s successful organizing of almost 600 workers at the National Visa Center in Portsmouth, NH, one of the largest union wins recorded by NLRB during the last year.

He recognized UE Young Activists, rank-and-file members, UE staff and members from UE Locals 208, 808, 1118, and 1008, who all helped the Portsmouth organizing committee and share responsibility for the victory. He also noted that UE’s solid track record of bargaining substantial wage and benefit improvements for our members employed by Federal subcontractors in Vermont, Chicago, Nebraska, and California played no small part in the organizing success.

For almost seven years, National Visa Center workers, who are employed by the contractor FCi, waited in vain for FCi to voluntarily provide wage increases.  Instead of providing wage increases, the FCi site manager infamously suggested a few months before the union election that workers deserve a wage increase and offered them a form letter which workers could use to write to their congressional representatives.

This past February after the organizing win in October 2016, UE Local 228 members negotiated their first UE contract with FCi and its subcontractors.  The new contract was achieved as a result of militant action in the shop.  At one point, more than 60 members participated in “open negotiations” which were used to convince FCi to negotiate a reasonable settlement.  The new one-year contract increased wages by 6-10%, while improving health insurance and job security.

Hardin then introduced NVC workers June Vermette, Lori Brown-Lavigne and Local 228 President Bill Ladd. Sister Vermette spoke about going eight years with raises of just a few cents, and having to reapply for her job when FCi took over. “I have been looking for a union for years, I am so glad we found UE. I am very, very proud to have you all as my sisters and brothers,” she declared.

Sister Brown-Lavigne told delegates how, after passing out flyers, bosses took her security badge and hauled her into the security office. “I was scared to death,” she said, but after her bosses were reminded that workers have a legal right to leaflet their co-workers, the security badge was returned to her.

Brother Ladd described how he was fired for organizing, but got his job back, with three months of back pay. He said that since the vote and the contract, numbers of “Vote no” members have turned into union supporters. Most importantly, he said, “I now understand solidarity: doing whatever is needed to help your brothers and sisters, no matter what.”

Elk closed out the organizing report by noting that, “It is not easy to organize. Everyone on this stage has passed that test, and we owe them gratitude for the hard work of organizing their coworkers.”

Several delegates then spoke on the resolutions. Matt Braddon, Local 222, thanked the national union for having Young Activists program, giving him and other young activists the opportunity to participate in organizing new workplaces. Mike Wells, Local 267, welcomed new locals to UE.

Marie Lausch, Northeast Region and Local 222, described how she was told by her boss that she wouldn’t be allowed to dispatch police officers after over 20 years of doing so, because the police union president was supposedly upset over a video of her participating in a Black Lives Matter march during the UE 2015 convention. “I’m not giving up on my right to free speech,” declared sister Lausch. “I believe that Black lives matter.”

After UE challenged the town over its attempt to abrogate sister Lausch’s free speech rights, she said she was approached by many rank and file police officers expressing gratitude that UE had not only saved her job, but defended all employees’ rights to free speech.

Mary Anderson, Local 808, called specific attention to Resolved 4 of “Organize the Unorganized,” which specifically calls on the union to organize sister shops. She related how important the support of sister locals 208, 1118 and 1008 were for organizing her shop, and noted that there are still unorganized federal service centers in Missouri, Texas, and Washington DC.

Opposing Right to Work for Less

Delegates then considered the resolution, “Oppose Right to Work.” Marie Lausch, Northeast Region and Local 222, offered an amendment to call on the national union to survey the organizational state of locals in states that are under threat of becoming right to work. Joni Anderson, Local 1107, emphasized the importance of communication with members, and urged locals to make use of UE trainings.

At the end of the session Ray Pompano, Northeast Region, thanked the union for the new red UE flags distributed at the convention and used during Monday’s demonstration. Secretary-Treasurer Andrew Dinkelaker recognized National Office Administrative Assistant Lyndsey O’Day for designing the flags.