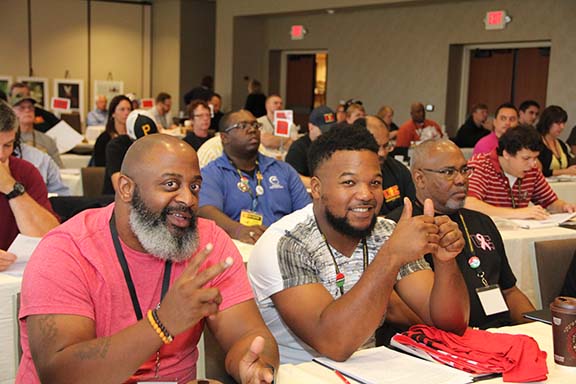 The second session of UE’s 75th convention was held on Monday Morning, August 28th. Delegates discussed resolutions on Workplace Struggle, Restore the Right to Strike, Collective Bargaining, Healthcare for All and Collective Bargaining for Public Employees. They also heard from guest speaker Bonnie Castillo from National Nurses United, who spoke about the importance of a culture of organizing, fighting for social solutions instead of market solutions to social issues, and the struggle for single-payer healthcare for all.

A common theme of many speakers on the resolutions was the crucial importance of keeping members informed. Steele said Local 506’s “copy machine stayed on fire” during recent decision bargaining, because they were running off so many informational leaflets for their members. Robles and Mayo also noted that sometimes it is necessary to be willing to take actions that are against the law, such as when Local 1110 occupied their plant or when Local 150 members have walked off the job in defiance of North Carolina’s ban on public-sector strikes.

After reading the “Healthcare for All” resolution, delegates watched a video produced by National Nurses United (NNU), and heard from guest speaker Bonnie Castillo, NNU Associate Executive Director, who said she felt a sense of unity, solidarity, and shared purpose with UE.

Sister Castillo declared that the corporate class is intent on completely eradicating our right to association, to collective action, but that we must continue to stand strong now. NNU and UE are “knit of the same cloth” and “understand that there is only one way to move: forward!”

Turning to healthcare, she observed that healthcare is not a commodity - health & healthcare need social solutions, not market solutions. Bernie Sanders’ campaign helped people grasp the need for social solutions. “We saw an incredible groundswell of youth, with ideas of different social priorities than what prevails now. Many of them see government as a vehicle for equality.” Our current, market-based system is causing an increasing number of preventable deaths, all to preserve profit for a few.

Sister Castillo called the history of Democrats in California “a history of pulled punches when it comes to real solutions.” Mainstream Democrats are firmly rooted in market-based solutions. Our challenge, she noted, is to move Democrats, and the single most important element in this fight is a culture of organizing.

She said that “the beauty of creating a culture of organizing is that it takes on a life of its own,” and relayed how the influx of youth and progressives into the Democratic Party in California, combined with the efforts of groups like Our Revolution and the Democratic Socialists of America, created a surge of energy for single payer in that state.

Reflecting on how mainstream Democrats in California killed the single-payer bill this year, she said that Democrats are ideologically incapable of understanding the moment we are in - it is up to us to provide a vision, and we must do this in the midst of a vicious attack on our very right to exist. However, NNU will join UE in continuing to stand up, be proud and organize.

Speaking on the final resolution of the morning, “Collective Bargaining for Public Sector Employees,” were Becky Dawes, Local 893, Scott Slawson, Local 506, Bailey Kelley, Local 896, and Angaza Laughinghouse, Local 150. Sister Dawes observed that the attacks on collective bargaining rights for public employees in Iowa started with the November elections, and that with the new laws, “Everything we worked for for 30 years was destroyed in one fell sweep.” Brother Slawson suggested that UE members boycott all products produced by companies owned by the Koch brothers, the right-wing billionaires who funded the attack in Iowa. Sister Kelley stressed the importance of political action, saying her members are motivated and angry, and ready to work hard in the 2018 elections. Brother Laughinghouse spoke about the importance of the Southern Workers International Justice Campaign in creating a climate that helped Local 150 organize public-sector workers even in North Carolina where collective bargaining is forbidden in the public sector.

After the convention was recessed, delegates boarded buses to join UFCW Local 23 and Pittsburgh United in supporting Giant Eagle workers. Pictures from the rally can be seen on UE’s Facebook page.