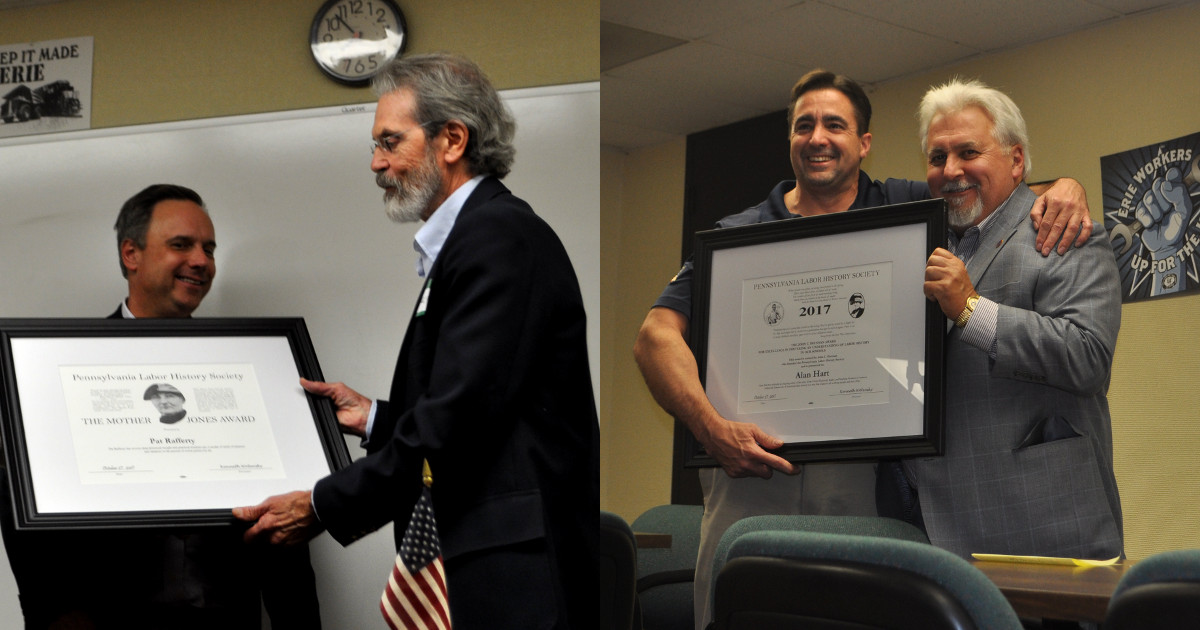 At the Pennsylvania Labor History Society’s annual conference, held in Erie at the UE Local 506 hall this past weekend, two retired UE leaders were honored at the Friday night reception and dinner. Retired Local 506 Business Agent Pat Rafferty was one of two local union leaders honored with the 47th annual Mother Jones award. Retired UE News Managing Editor Al Hart, who was a member of Local 506 in the 1970s and 80s before coming on UE staff in 1986, received the John Brennan Labor Education Award. Hart was also one of three presenters at the conference on Saturday, speaking on the GE strike of 1918-1919, which began in Erie.

Rafferty was introduced by current Local 506 Business Agent Mike Ferrito. Rafferty, in his remarks, spoke about how important labor history is for informing current struggles. He talked about how when he was in various leadership positions in the local, he and other would go back into the archives for inspiration and strategies, including the rolling strikes the local used when the company wanted to consolidate codes and classifications.

“The company wanted complete control,” said Rafferty, but Local 506 members, he said, were disciplined enough to effectively use this tactic..

Even though Local 506 didn’t always win in its struggles against the company, Rafferty said, “we kept our dignity and forced GE to pay a high price for their ill-advised plans.” He commended the current officers, executive board and membership of Local 506 for their current struggle against GE, and particularly the way they have brought the community into the fight.

Hart was introduced by Local 506 President Scott Slawson. Reflecting on the fact that the award was for “labor education,” Hart declared that the Local 506 hall was “where I got my labor education.” He noted that Local 506 was “the ultimate survivor of the McCarthy era,” remaining strong despite the efforts of the federal government, GE, both political parties, most of the labor movement, the media and the Catholic Church to destroy the local.

Touching on the local’s current struggles to preserve jobs in Erie, Hart declared that “GE is a tough company, but this is a tougher local.” Hart concluded his remarks by noting what while he has stepped down from his UE position, he’s “not going to step down from the class struggle.”

On Saturday, Hart began by recounting how he had first become aware of the strike. As a newly elected member of the Local 506 executive board in 1979, Building 2 Chief Steward Pat Leone approached him and told him about an acquaintance that said he was involved in a strike at GE back in 1918. The acquaintance’s name was Dan Carbone, and he had participated in the strike as a teenage apprentice.

Hart interviewed Carbone, who had been a socialist activist as a teenager, and subsequently looked up coverage of the strike in the archives of the Erie Dispatch, writing an article for the Local 506 Union News. Hart’s article was picked up by the national UE NEWS and was also cited by labor historian David Montgomery in his book The Fall of the House of Labor.

Prior to the strike, members of the Machinists union who worked at the Erie GE plant held a conference in Erie, in November 1918, with representatives from six GE plants. The aim of the conference was to form a federation “so that as soon as a dispute arises, all plants become involved immediately, and the trouble is settled by all machinists and not by one plant.” They named the new labor organization the Electrical Manufacturing Industry Labor Federation. Hart pointed out that although these were skilled machinists, and members of a craft union, they were attempting to form an industrial union to unite all of the workers at General Electric, almost twenty years before the founding of UE.

The representatives at this Erie conference adopted a four-point program for their fledgeling labor organization. The first two were not surprising: a 44-hour work week (Carbone had told Hart that the standard workweek at GE in 1918 was 55 hours), and a system of unemployment compensation (federal unemployment insurance was not instituted until 1935). The third point, Hart said, was the most remarkable: a demand that fully half of the representatives to the Versailles Peace Conference be from labor.

The Erie GE workers clearly subscribed to the position held by UE (but few other unions) that the labor movement should have its own approach to foreign policy, one not dictated by the bosses’ parties. When considered with their fourth demand, the release of all political prisoners, Hart said this indicates that the workers were interested in winning both justice at work and a just world.

The strike began on December 10, 1918, after management refused to discuss workers’ grievances with union representatives. 1600 workers walked off the job at 10am and marched to the headquarters of the Central Labor Union. As the strike progressed, the number of strikers in Erie grew to 2300, and GE workers in Schenectady, NY, Pittsfield, MA and Fort Wayne, IN struck in solidarity and to raise their own demands. On December 27th the blacksmiths in the Erie plant joined the strike and applied for a charter from the AFL’s blacksmith’s union.

“This was a pretty lively strike,” Hart said, with activities every day including dances, parades, and mass meetings every night. However, GE completely refused to negotiate with the unions, eventually leading to the end of the strike. On December 31st, union leaders met with the War Labor Board (a government agency set up to manage labor relations during World War I), and on January 3rd the strikers offered to return to work if the board would take up their grievances.

However, as Hart noted, “Before the Wilson Administration or Congress abolished the War Labor Board, General Electric abolished the labor board.” GE took the position that, since the war was over, they did not need to recognize the authority of the federal government.

Although the strike was unsuccessful, Hart suggested that “it did lay the groundwork for what became UE,” which organized the plant less than 20 years later, especially “the insistence from the get-go that we’re not going into it with a craft union, we’re going to organize an industrial union.” Hart pointed out that the workers who organized Local 506 “were not unskilled workers … they were skilled workers who, from the get-go [were] not interested in forming a craft union here in this plant,” but instead insisted on organizing everyone in the plant into one union.

Hart ended his talk by comparing the strike wave following World War I in 1918-19 to the strike wave following World War II, when UE, the UAW and the Steelworks jointly struck and won an 18½ cent raise across the electrical manufacturing, auto and steel industries, which was a huge increase for the time. He noted that just as the wave of strikes in 1919 was followed by the red scare and massive repression against the labor movement, so the 1946 strike wave was followed by the “Cold War against labor,” and especially intense attacks against UE. 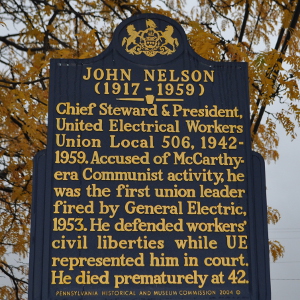 This was not the first time the PA Labor History Society has honored Local 506. They initiated the placing of a historical marker outside of the Local 506 hall honoring former local chief steward and president John Nelson, who died prematurely at the age of 42, while being persecuted by the federal government.

The labor history society also presented awards to local teacher’s union activist Sam Talarico and Roseann Barker of the Northwest Pennsylvania Area Labor Federation. On Friday night, Corrine Egan of the Jefferson Education Society spoke about the international solidarity mural painted on an interior wall of the Local 506 hall. The Saturday session was also addressed by retired Erie County executive Judith Lynch and historian James Young, whose book on the history of Local 506, Union Power: The United Electrical Workers in Erie, Pennsylvania, was published in February.