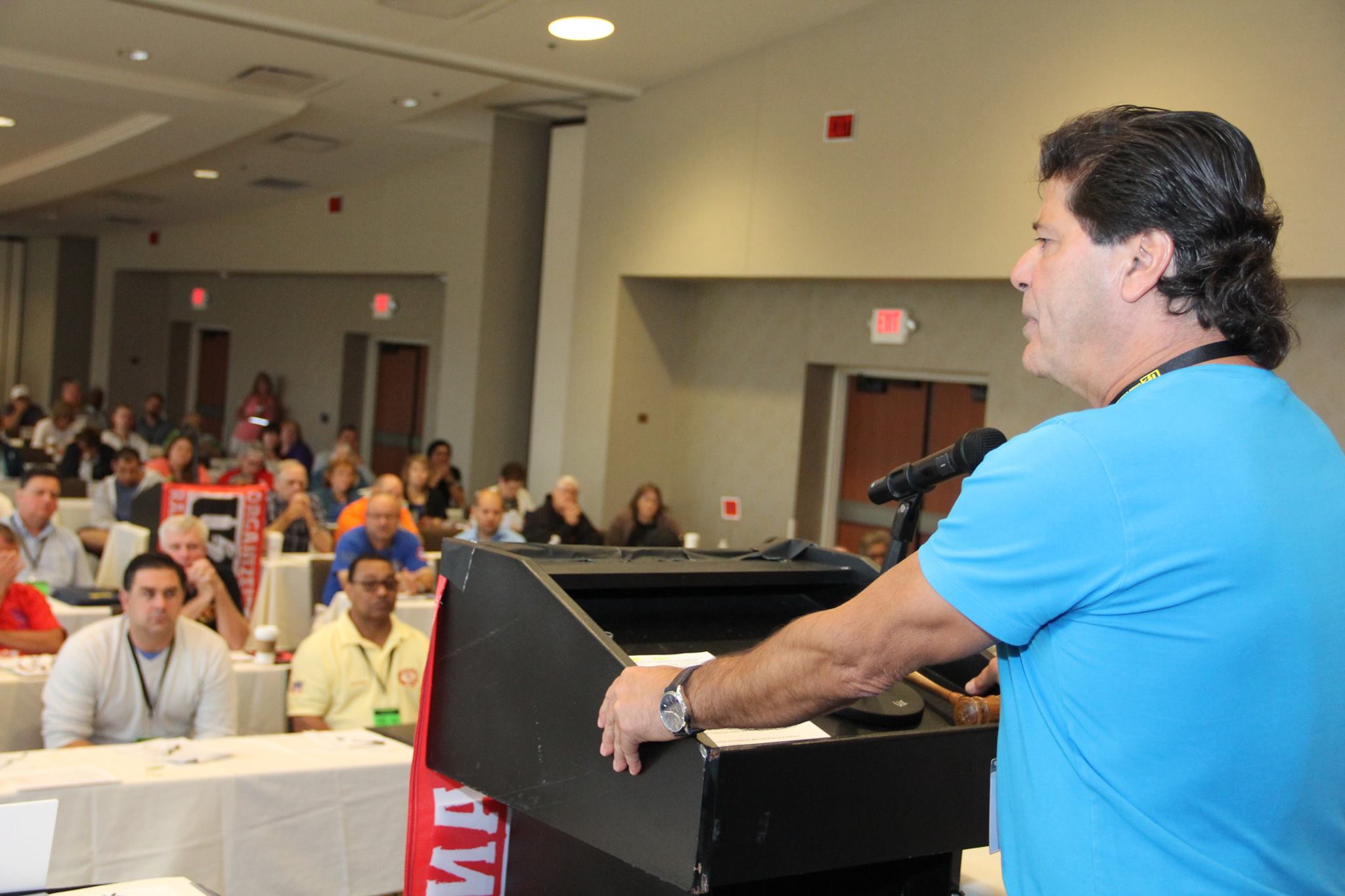 President Peter Knowlton opened the Tuesday morning session of UE’s 75th National Convention by recognizing retiring UE News Editor Al Hart, who has served as Managing Editor of the UE News since 2006. Brother Hart joined the UE as a rank and file member of Local 506 over forty years ago, and later served on UE’s organizing staff. He also recognized international guests from Unifor of Canada, the Confederation of National Unions (CSN) of Quebec, Zenroren of Japan, the Metallurgical Employees Workers Federation (FIOM-CGIL) of Italy, and the Authentic Workers Front (FAT) of Mexico.

Delegates considered the resolution, “UE Education: Essential for Rank-and-File Unionism.” Sharry Niedfeldt, Local 1161, talked about the need to educate younger workers, and suggested that the public schools should educate young people about unions. Angaza Laughinghouse, Local 150, spoke about how Local 150 holds “Lunch and Learn” events during members’ lunch breaks, to talk about a wide variety of issues facing workers.

Liv Jordan, Local 203, spoke about recent murders of transgender people, and asked delegates to consider how the labor movement’s historic language of “brothers and sisters” does not include workers who do not identify as “male” or “female,” and what can we do to be more inclusive, and received a standing ovation from the convention.

Delegates then watched a powerful video from Unifor, “My Unifor Includes Me,” about the inclusion of LGBTQ+ workers in the labor movement:

President Knowlton then recognized Unifor National President Jerry Dias. President Dias announced that Unifor is “a union for everyone. We’re a union that is based on the fundamental principle of eliminating racism and discrimination in all of forms. I’m a democratic socialist and I’m damn proud of it and you need to know that.

“My clock number is 28091. I’m a shop floor worker … and I am very proud of the fact that I am working class. And that’s the commonality of our two organizations.”

Dias spoke of the shared history between UE and Unifor. UE was the first US-based union to recognize the autonomy of its Canadian locals, and in 1992, UE Canada joined the Canadian Autoworkers (CAW), one of Unifor’s predecessor unions. And he also spoke about the importance of the North American Solidarity Project being launched by UE and Unifor, to change and renew the labor movement in both countries.

He explained how Unifor’s predecessor unions, faced with an extreme right-wing government in 2011, launched the “New Union Project” to create a new national Canadian union with a new identity, structure and operating principles that could change the labor movement and the country.

Dias said that Unifor and UE need to bring the same spirit to our Solidarity Project – not to form a new union because UE and Unifor are in different countries with specific national interests, but to form a new kind of continental solidarity for trade union renewal and change.

He outlined several principles for this new kind of solidarity: rank-and-file democracy; a determination to go on the offensive for worker rights and to organize, speak and act on behalf of the whole working class, organized and unorganized; a comprehensive commitment to equity and a relentless struggle against racism, sexism, homophobia and other discriminations that divide us; bargaining for progress, not concessions or two tier; and last but not least, an all-in commitment to labour politics that breaks the pattern of contracting out our politics to politicians and parties that neglect, minimize or compromise worker rights.

These principles have been successful in Canada in both revitalizing the labor movement and defeating right-wing governments. Unifor helped elect a new president of the Canadian Labour Congress, a progressive, militant, social unionist and Unifor member who is also the first worker of color to hold that office. They defeated a right-wing candidate who was expected to win the Ontario provincial elections and have subsequently elected more worker-friendly governments in other provinces and nationally.

Eighteen months into the new Liberal national government in Canada, “everything is not wonderful in Canada – our social and economic problems are profound,” but the previous governments anti-labor laws have all been repealed.

Dias then spoke about the legacy of the North American Free Trade Agreement (NAFTA), which has devastated manufacturing jobs in the US and Canada, and has been a disaster for workers in all three countries. He is the only trade unionist who is part of the NAFTA renegotiations currently taking place, and he spoke about how “a better NAFTA” has to be about creating jobs in the US and Canada, not destroying them. “My problem isn’t with Mexican workers,” he pointed out. “It is with the corporations that exploit workers in all three countries.”

He talked about how, after a century of production in Peterborough, Ontario, General Electric announced last week that they were closing the plant, at the cost of 360 jobs, members of Unifor Locals 599 and 524. He thanked UE and Local 506 for their immediate offer of solidarity, and said that while GE often cites “global pressure” as a reason to close plants or destroy jobs, that workers united across borders could put real “global pressure” on GE.

Dias concluded by observing that “an attack on one is an attack on all, and we will all stand strong when we stand against racism and with women, immigrants and refugees and our LGBTQ+ community,” and that “the most important way for us to build a just society is through our collective voice in the labor movement.”