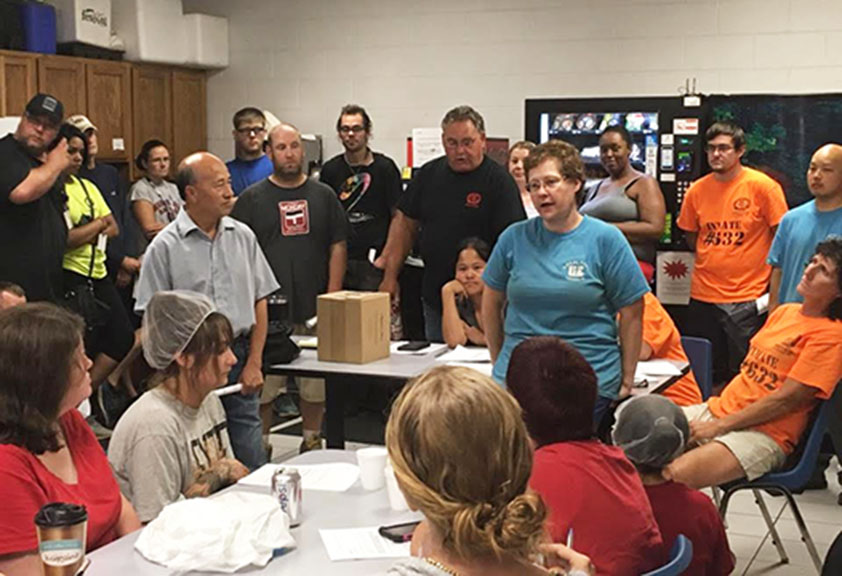 On Thursday August 3, a packed room of UE Local 1121 members enthusiastically voted to ratify the new contract with their company, Aramark Laundry Services. It was the strongest contract the workers had won, with 40-cent wage increases every year, their first-ever paid sick days, and a stronger safety committee. The vote came at the end of more than three months of fierce struggle by the laundry workers that culminated with the local’s first-ever job action, shutting down production as workers walked out and marched around the plant for 45 minutes at the start of this week.

Aramark is known in the La Crosse area for its sweat shop-like conditions: low wages, unsafe working conditions, a dangerously-high rate of production that led to unnecessary injuries, and a management team that treats its workforce as less than human. It is no wonder that when the members were deciding what their shirts should be for the contract campaign, they decided on two designs: one designed to look like a prison uniform, and another demanding that the boss “stop working us to death.” The boss had also played groups within the diverse workforce against each other, and had targeted the Hmong women who make up a significant portion of the workforce for significant harassment.

From the beginning of the campaign, the union leadership focused on uniting the members as the key to successful negotiations. This would be their first contract since Wisconsin’s Republican-controlled legislature and anti-union Governor Scott Walker has made the state “right-to-work” in 2015, and the union’s future depended on unity in these negotiations. The first event the local organized was a potluck meal and discussion of demands at the Hmong Community Center in La Crosse. The union let members know that translation would be provided for any of the workers that did not speak English well. What was planned as a quick lunch turned into a several-hour conversation with Hmong workers and white workers about their shared concerns and what demands to bring to the company. From that moment on, the local leadership made sure that their outreach and shop floor activity involved all elements of the diverse membership.

Workers’ central demands were a significant wage increase, paid sick days, and no more wage tiers. Management wanted something different: a small wage increase, more expensive health insurance, and a third wage tier. The company used its typical tactics, dragging out negotiations for months with the goal of denying momemtum to the union’s efforts. The local responded that if management wanted to drag out negotiations, the union would sign no more contract extensions.

In the first week of working without a contract, the entire workforce dropped their work, marching from their work departments where indoor temperatures often exceed 120 degrees, into the company’s air-conditioned front offices. There the members delivered a petition demanding that the boss accept the union’s demands and sign a contract. Not accustomed to this level of militancy, managers stood with their mouths open in shock.

When managers announced a free company-paid trip to an upcoming baseball game, the union put up a posting that encouraged members to wear their union shirts to the event. This came after months of “union shirt days” on which 90 to 95 percent of the workers regularly wore union T-shirts on the job. When the union posting went up urging members to wear their UE shirts to the baseball excursion, management went ballistic and, in front of our union leadership and most of the membership, threatened to rip the posting off of the union bulletin board. The union did not back down. The next day the company cancelled the baseball trip.

The grand culmination of this fight was the walkout on Monday, July 31. At 12:00 p.m., when both shifts were in the facility, 100 percent of the union workforce ceased work, punched out, and marched out of the building. After a bilingual rally where they were urged to stand together and do whatever it takes to win their demands, members marched around the plant behind a banner saying “Aramark: 21st Century Sweatshop”. Workers chanted, “Who are we? UE!” and “No Contract? No Peace!” When the march ended, the workers returned to work with their heads held high. This has been the local’s first walkout in its more than 20 year history. The balance of power at Aramark had just shifted in the workers’ favor.

Two days later negotiations resumed. Management immediately began retreating. The company’s demand for a third tier was dropped. Company negotiators t agreed to the union’s final wage demand of $1.20 increase over three years, and even reached a compromise on health insurance. The bargaining committee left the table knowing that they could without hesitation recommend a yes vote. Their struggle had won everything they had demanded and then some.