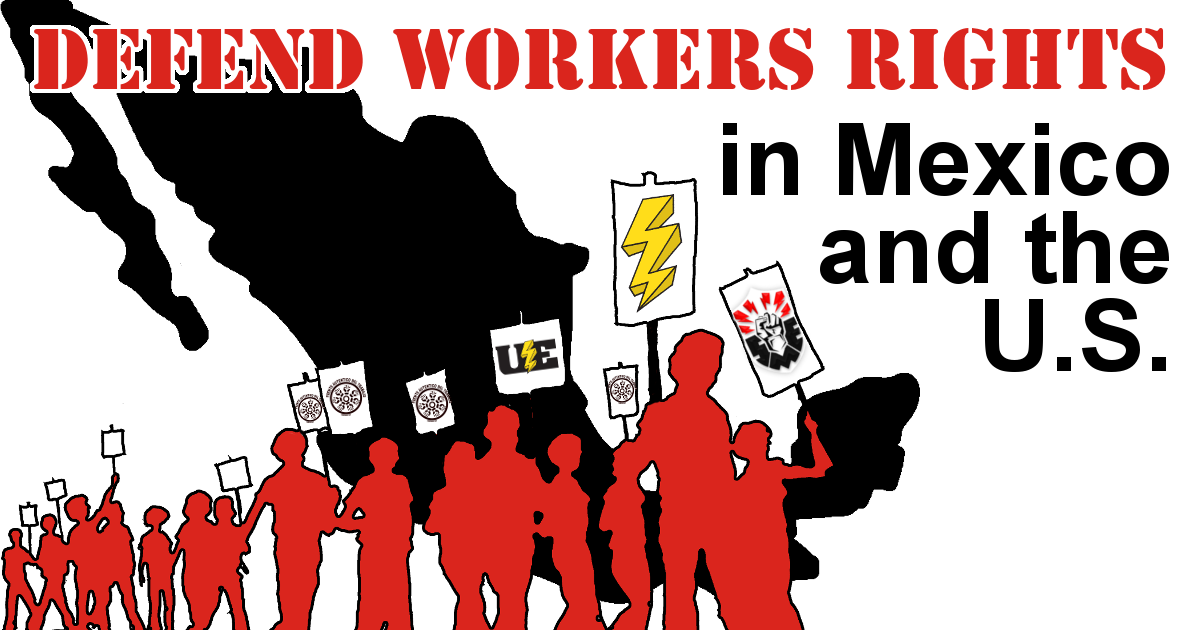 In December and January, more than 1000 supporters signed on to a UE petition opposing attacks on workers’ rights in Mexico. The petition, addressed to U.S. Trade Representative Robert Lighthizer, demanded that he prevent an agreement on a new North American Free Trade Agreement (NAFTA) while horrendous labor legislation is pending in Mexico.

In December, two Mexican legislators submitted proposals for reform of Mexico’s labor law which would make it easier to subcontract work and to fire workers without even putting the termination in writing. What makes this proposal even more outrageous is that it was submitted by leaders of so-called unions, Senators Isaias Gonzalez Cuevas of the Revolutionary Confederation of Workers and Farm Workers (CROC) and Tereso Medina Ramirez of the Confederation of Mexican Workers (CTM).

UE allies in Mexico called for support from workers and unions everywhere to help them stop this legislation that will only benefit corporations, not working people. The independent, democratic unions of Mexico feared for their very survival if this legislation is not curtailed.

In 2017, positive reforms to Mexican labor law went into effect. These changes made it much more difficult for companies and corrupt unions to enter into so-called “protection contracts,” in which these parties signed contracts without the involvement of any of the workers covered by the agreement. (These contracts protect the companies, not workers.) In some cases, companies entered into these contracts before they had even hired workers. The new reforms said that workers must have the opportunity to vote on contract agreements by secret ballot, and they must be able to access a copy of their contract.

The new law proposed by these senators would undo this, and more. Changes to the the rights of workers in Mexico have a ripple effect in the North American economy. When it’s easier for corporations to exploit Mexican workers, greedy bosses have incentive to move jobs from the U.S. and Canada into Mexico. All workers suffer under such a rigged system.

UE sent out a message to our supporters and received back more than 1000 signatures on our petition to Lighthizer. We are not alone in mobilizing against this law. Over 180 members of congress sent a letter to Lighthizer decrying this legislation and its potential impacts on workers in both Mexico and the U.S. It read in part, "While many of us have ongoing concerns over additional provisions of NAFTA affecting labor, we felt it was important to highlight with a unified voice the primary source of significant outsourcing: Mexico's low wages and lack of labor rights."

In addition, the AFL-CIO and the UNT (the largest organization of independent unions in Mexico, which includes our partners at the Frente Auténtico del Trabajo) filed a formal complaint through the office that enforces the North American Agreement on Labor Cooperation (NAALC), NAFTA's labor side agreement. Their complaint alleged that this legislation violates NAALC.

Fortunately, the legislation did not pass out of the Mexican Senate before their session ended, and the upcoming Mexican elections on July 1st mean that it is unlikely to see daylight again before the fall (if at all).