A Comic Look at an America TORN Apart 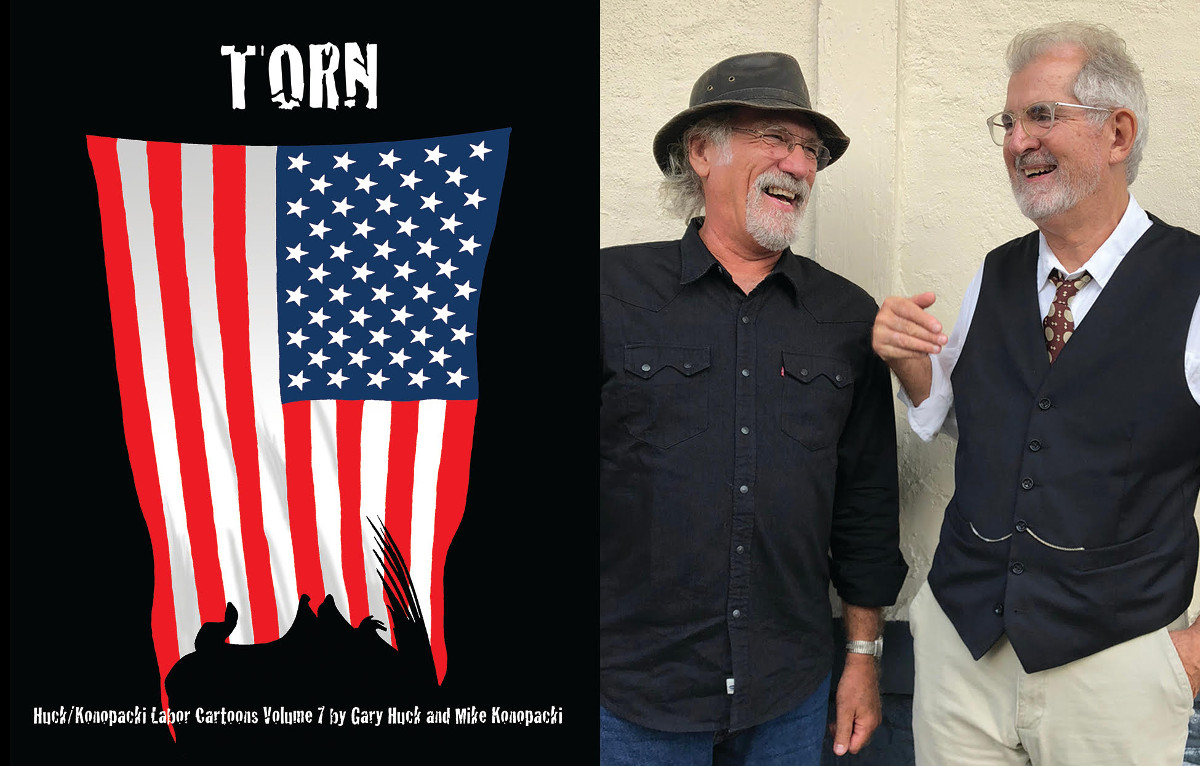 Retired UE cartoonist Gary Huck and his long-time partner-in-crime Mike Konopacki have produced another book of political and labor cartoons, their seventh: TORN.

UE members who, like myself, have been around since before Huck’s retirement and remember his cartoons in the UE NEWS will not be surprised that the cartoons in this book address a wide range of topics — and will, in fact, recognize some of the cartoons from the pages of the UE NEWS. Like UE, Huck and Konopacki consider the whole of working-class experience, and the book includes sections on elections, war, immigration and racism as well as unions, the economy and health and safety.

In his introduction, Huck tells us about his childhood fascination with the intricate patterns on the bandanas his father, a factory worker, would always have hanging from his back pocket before he left for work in the morning. Now he always carries a bandana “partially to remember my father, partially because I am still fascinated by the intricate pattern, always to remind me that I come from the working class.”

It is an apt metaphor for Huck’s cartoons, although their intricacy is often more intellectual than graphic. They are by turns conceptual — a repeated rendering of a box, labelled “benefit package,” shrinking as it moves across the page — and surreal — a six-panel dialog between a worker and President Trump about the 2017 tax giveaway to the wealthy in which Trump’s random tweet-language makes it clear that the worker isn’t getting much of a tax cut. They all come from a firm identification with and commitment to the working class.

Both cartoonists frequently employ familiar American iconography in ways that highlight the complexity of being American and yet often opposed to the actions of our government. The Statue of Liberty makes frequent appearances, both as a symbol of hope and solidarity (holding hands with Lady Justice behind the words “Me Too”) and as a foil for pointing out hypocrisy (whitewashed and holding a sign saying “Whites Only”).

The pop-cultural references in the cartoons are another highlight for me. A Mr. Peanut with “RTW” (“Right to work”) emblazoned on his top-hat is both a joke about how right-to-work laws leave workers working for peanuts and a subtle reference to the origins of right-to-work laws in the plantation-dominated economy of the Jim Crow South (The “Mr. Peanut” character, designed for Planters Peanuts, was originally intended to represent a Virginia plantation owner). A judge’s gavel inscribed with “This Machine Kills Unions” comments on the political use of the Supreme Court to hobble unions in the Janus decision while invoking the great working-class songwriter Woody Guthrie, who famously wrote “This Machine Kills Fascists” on his guitar.

Although the cover is a visual reference to Trump, the cartoons included in the book go back to 2010, and the political cartoons skewer corporate Democrats as much as Republicans. Indeed, the cartoons can be read as an historical record of how Democrats’ indifference to the working class led to the triumph of Trump’s cynical “populist” appeal to working people, while pulling no punches about the racism and anti-immigrant hysteria that also helped propel Trump to the White House.

Huck and Konopacki have created another great collection of working-class art and humor, poking fun at bosses and politicians while always celebrating working people as the heroes of our own stories. The “In Memoriam” section of the book contains cartoons honoring Mexican political cartoonist Rius but also poet Maya Angelou, rank-and-file union activist Linda Horan, comedian Barry Crimmins and singers Leonard Cohen, Ronnie Gilbert and Pete Seeger. It is a fitting close to the book, a reminder that working-class art is as free-spirited, unruly and diverse as the working class itself.

TORN can be purchased online at huckkonopackicartoons.com