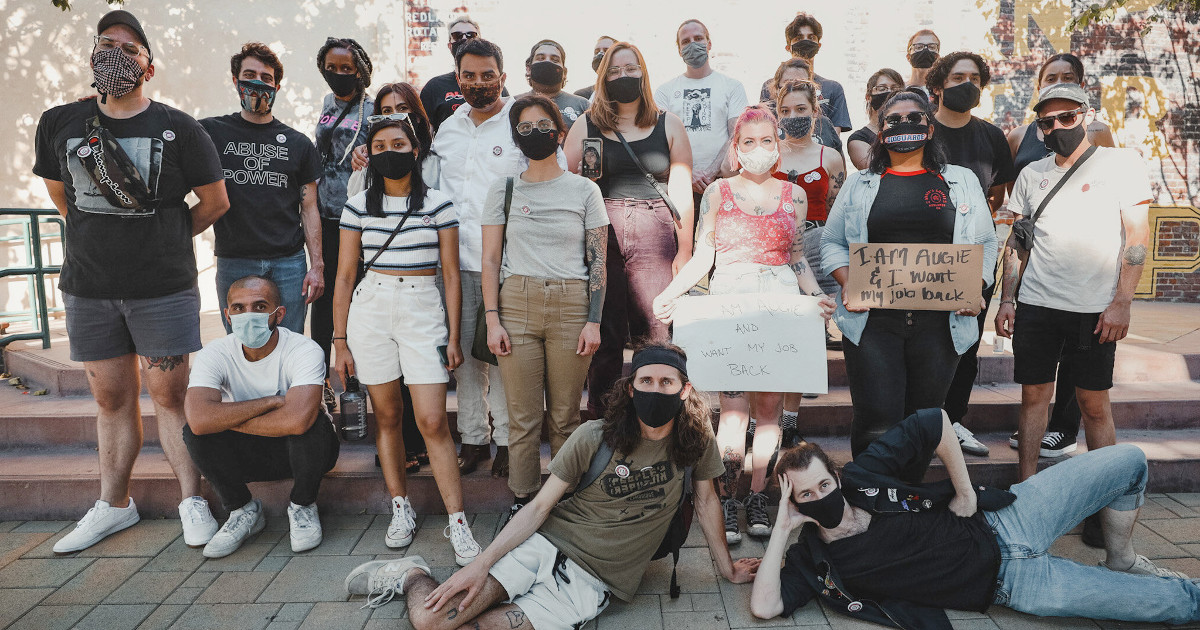 When workers at Augie’s Coffee demanded recognition of their union last summer, their bosses responded by shutting down all five coffee shops, effectively firing 54 workers. Taking to heart the old Industrial Workers of the World slogan, “The boss needs you, you don't need him,” the workers have now formed a worker co-operative, Slow Bloom Coffee.

“The union organizing drive at Augie's was born out of good faith with the intention of restoring dignity to workers that had been denied a voice,” said Matt Soliz, one of the leaders of the organizing drive. “When our bosses responded by trying to dismantle the business that our labor had built, it just drove home something that we'd known all along. We don't need them. Slow Bloom is our expression of workplace democracy. It's us recognizing that the people who do the work should have a voice in how it is done.”

Augie’s workers reached out to UE in June after they decided to unionize. In April and May as business began to pick up, workers who had stayed home to protect their health or families during the initial shock of the pandemic discovered they had been retaliated against and removed from the schedule. As workers gave each other shifts to help everyone to come back to work, they began discussing the gap between Augie’s public image as an ethical company and their employer’s actual behavior. Management had repeatedly failed to provide masks, sanitizer, or protective shield, and had gone so far as to sell branded masks online for several weeks - while baristas working for minimum wage were forced to supply their own. Promised wage increases never appeared, and management demonstrated a general unwillingness to listen to workers’ concerns.

“Work was stressful, and my co-workers and I really leaned on each other to survive,” said Augie’s worker Ryan Bermuda. “It was a scary time, it was difficult getting PPE from the owners, and most shops had closed completely so we were extremely busy. Business dipped in April, but was back to normal. Many of my co-workers were working long stretches of 7-12 days without a day off. We all became very close.”

With majority support in all locations, the newly-formed Augie’s Union demanded recognition at the end of June. On July 4, Augie’s owners Andy and Austin Amento announced the closure of all retail locations and fired all 54 pro-union employees via a group email. The Amentos kept their warehouse open, but even went so far as to fire the warehouse workers who had signed the union support petition.

Over 150 community members came out the next day to support the workers as they collected their final paychecks. UE filed charges with the National Labor Relations Board and launched an online petition which drew almost 4,000 signatures. Workers held petition drives outside the closed stores. “These people are the backbone of our community,” UC Riverside professor Norman Ellstrand, a former Augie’s regular, told the Los Angeles Times. “So of course we would come out to support.”

As they organized, many workers also discovered that they had been the victims of wage theft, uncovering years of violations of wage, hour, and break time laws.

“During the years that I worked in the warehouse I would often work 8 hours straight without having the chance to take a lunch break — which it turns out is illegal,” said six-year employee Kelley Bader. “I trusted the Amento’s and it’s startling to realize that laying us all off wasn’t the first time they were breaking the law.”

“During the pandemic there were weeks when I was working 10 days straight or more without overtime compensation or appropriate breaks,” said Katie Walsh, an employee from Redlands. “It's really upsetting that we worked so hard to keep Augie’s afloat during the pandemic and they repaid us by violating overtime laws and then laying us all off.”

On July 23, workers filed 18 individual wage theft claims with the California Division of Labor Standards Enforcement. The claims averaged over $7,000 per worker, and together detail over $140,000 in violations committed by Augie’s Coffee over the last three years.

“The relentless love of a community trying to stick together”

Although the owners clearly closed down in retaliation for workers’ organizing, the NLRB has been slow to issue any sort of injunction to force the owners to rehire the workers. Even if an injunction is issued, the owners could easily appeal, and especially under Trump, the NLRB has shown little interest in aggressively enforcing workers’ rights.

The former Augie’s workers could easily have become a statistic, one of the hundreds of union drives that are destroyed by illegal employer behavior every year. But they are refusing to let that be their fate.

“The layoffs were a physical and emotional shock,” said Bader. “I still remember where I was when I got the email and the dizzy feeling it gave me. It wasn’t the job I was afraid to lose, it was my community, my home. My coworkers were more than just my friends, they’d help me with shifts and financial trouble, but they also pulled me through some of my life’s hardest moments. They’ve always been there for me and the thought of losing that connectedness was devastating. And that’s why Slow Bloom means so much to me, it’s the relentless love of a community trying to stick together and make something beautiful from a struggle.”

“Our community was there to help encourage us [during the pandemic], and they appreciated our work,” said Bermuda. “They made us masks, they tipped a little extra. So when we got an email saying that we were all fired, we were devastated. Our customers were devastated. Nobody could believe it. It’s left a giant hole in the community that took care of us, that we loved to serve. That is why Slow Bloom has to happen — to help keep our community together.”