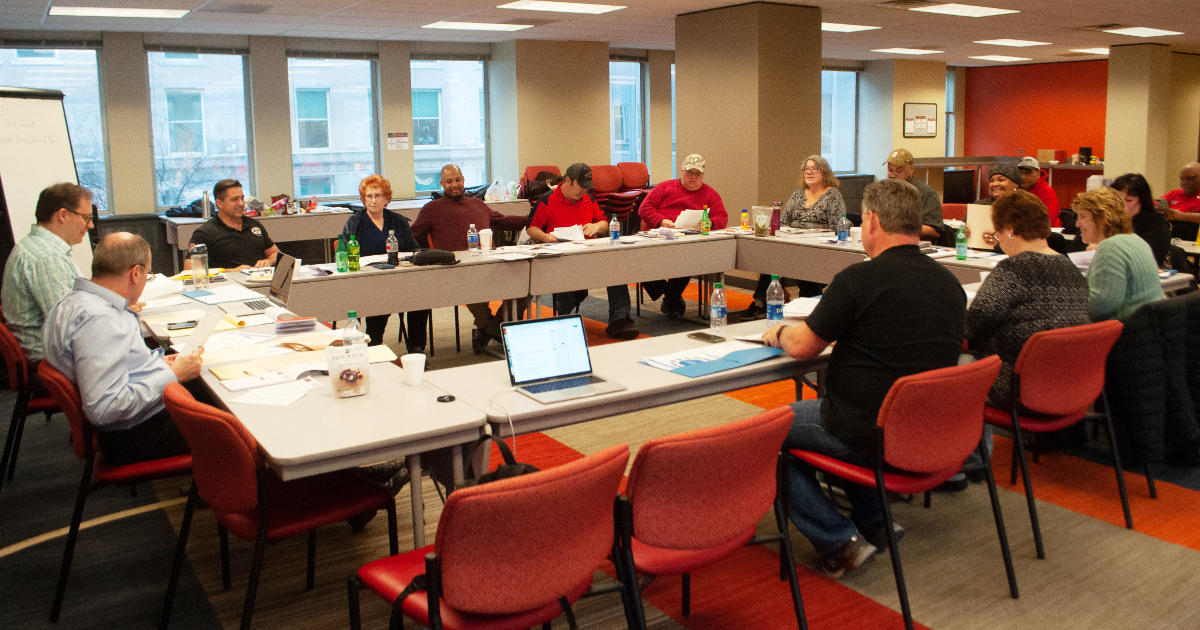 UE’s General Executive Board met from January 29-31 to review the union’s organizing, political action, international and education work since convention, as well as the union’s finances.

In the organizing report, Director of Organization Gene Elk reported that the highlight of the recent period were organizing victories among 375 workers at Willy Street Market in Madison, WI and ESS in Winslow, NJ. Both new locals are currently in tough first contract negotiations.

Since the convention, UE has also successfully built majorities at Hallcon yards in Fort Worth, TX, Minnesota, and smaller locations in Wisconsin, covering 250 workers in all. The company’s refusal to honor the contractual card-check agreement in these cases is going to arbitration next month.

Reporting on the North American Solidarity Project, General President Carl Rosen said that the UE officers met with Unifor’s officers in the fall with commitment to mutual support remaining strong. UE hosted a NASP meeting in Chicago in November to firm up plans for core campaigns: healthcare, equity and anti-racism, workers’ rights and workers power, trade and migration, and climate. The climate work is taking the form of “ten days of action” from Earth Day to May Day to tie climate concerns with workers’ issues, that the need for good union jobs needs to be part of the transition away from a carbon-based economy.

Scott Slawson, Local 506 reported that the UE Wabtec locals will be meeting in Erie in March and are planning to invite Unifor’s Wabtec local from London, Ontario.

Secretary-Treasurer Andrew Dinkelaker introduced board members to realtor Scott Fabean, who is assisting UE with the search for a new national office. Fabean gave a report on the results of the search, along with Research Director Karl Zimmerman and Office Manager Joanne Caporoso. After a thorough discussion of the economics of the Pittsburgh real estate market, the board approved plans to move ahead with negotiations at sites which would cut the union’s costs significantly.

Board members also discussed the upcoming reorganization of UE’s regions, reviewing the proposed constitutions, financial practice documents, budgets and subregional maps for the new regions. These documents will be presented, discussed and voted on by the new regions at meetings in March and April.

During the political action report, President Rosen reviewed the union’s efforts to support Bernie Sanders’ presidential campaign, which was endorsed by the 2019 convention, and went over legal guidelines for UE political action during the election and literature that has been produced for locals to use. He also reported that the insurance industry has spent heavily on political ads in Iowa in the run-up to the Iowa Caucuses to try to stop Medicare for All.

UE General Counsel Irene Thomas gave a legal update, reviewing a series of decisions made by Trump’s National Labor Relations Board which has rolled back workers’ rights around forming unions and engaging in collective bargaining.

While in Pittsburgh, GEB members Jim Borowski, Local 106, Northeast Region President Autumn Martinez, and Kelly Robtoy, Local 208 participated in an online video exchange with Unifor, which was also joined by Tom Bobrowicz, Local 506 and Dominic Harris, Local 150. The UE members had opportunities to ask Unifor members and staff about how the Canadian single-payer healthcare system works, in which the Canadian union members clarified that, contrary to the popular myths, they can choose their doctors and do not face long wait times to get care. The Canadians were, in turn, shocked to learn about how the U.S. healthcare system fails to meet the needs of many working people, including UE members.