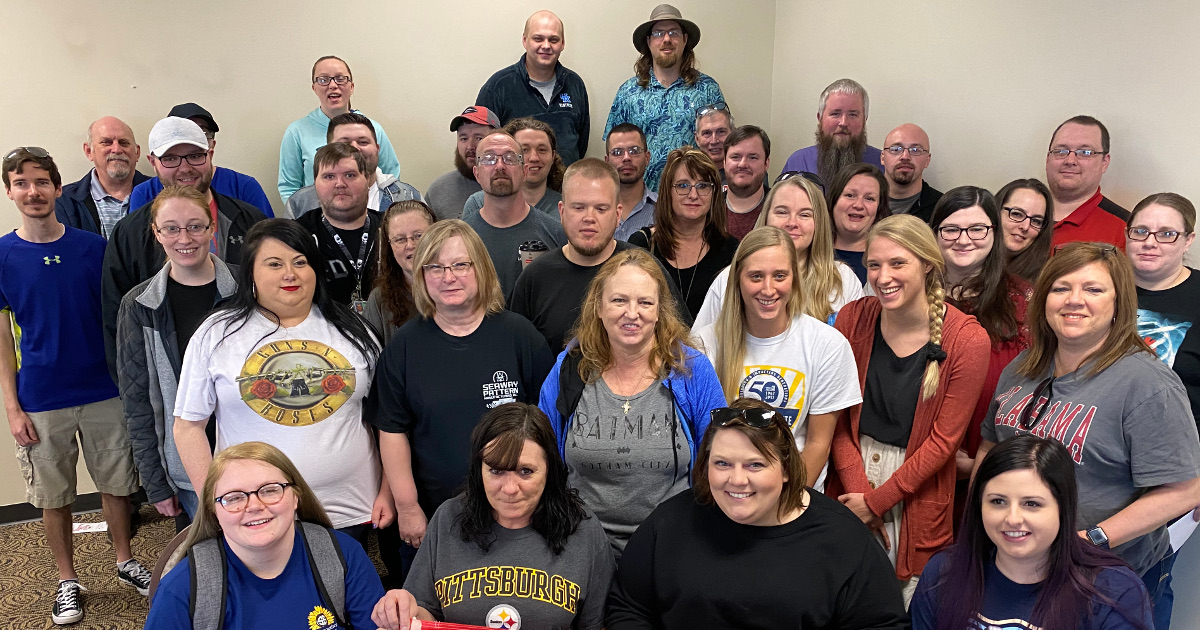 In what is so far the largest NLRB election victory of the COVID-19 era, almost 400 workers employed by federal contractors at the Kentucky Consular Center (KCC) have voted overwhelmingly to join UE in a mail ballot election. When the ballots were counted on June 12, UE had won 84 percent of the vote.

The Kentucky Consular Center is the sister shop to the National Visa Center in Portsmouth, New Hampshire, represented by UE Local 228. Both locations process visa and “green card” applications for the Federal government.

KCC workers had made a previous attempt to organize with UE which fell short. However, after going through a humiliating “onboarding” process with a new contractor, workers decided they had had enough. They would no longer tolerate their benefits being wiped out between contractors, no wage increases, unaffordable healthcare, and no real voice on the job.

International Representative Zach Knipe, who helped Local 228 negotiate their most recent contract, drew a huge (pre-pandemic) crowd of union supporters to a special meeting to discuss how federal contract workers can fight back and win improvements in their wages and working conditions. KCC workers were impressed by the outstanding job that UE has done to improve wages and working conditions for workers at the National Visa Center and for other government contract workers across the U.S. In just two weeks, the workers signed up nearly 70% of their co-workers on union cards.

Shortly after the union filed for an NLRB election, stay-at-home orders were issued due to the pandemic. UE staff had to return home for the remainder of the campaign, but the workers did not give up. A strong organizing committee, combined with creative strategies developed by UE organizers, were able to bring the campaign home during the pandemic.

Organizing committee member Brian Bradley said, “I was told many times in the past that even thinking about organizing KCC was a pointless endeavor. However with the landslide victory I believe it is safe to say that we know who we are, WE ARE UE!”

The victory inspired organizing committee member Tonya Kelly to quote C.S. Lewis — “There are far better things ahead than any we leave behind.” With the union in place, Kelly continued, “Not only do I look forward to positive change but I welcome it!”

“We are stronger together,” said Local 228 President Lori Lavigne. “I am so excited about the victory at KCC and I look forward to working with them and they have 100 percent solidarity from Local 228. Together we can beat the boss. Welcome to the UE family.”

Members from UE Locals 208, 228, 808, 1008, and 1118, who are all employed by Federal contractors, played an important role in convincing the workers to organize. UE International Representative Karen Hardin and Field Organizers George Waksmunski and Lyndsey O’Day led the campaign. UE International Representatives Mark Meinster and Zach Knipe also made significant contributions to the victory.