What's at Stake in the Presidential Election: Trump’s War on Workers 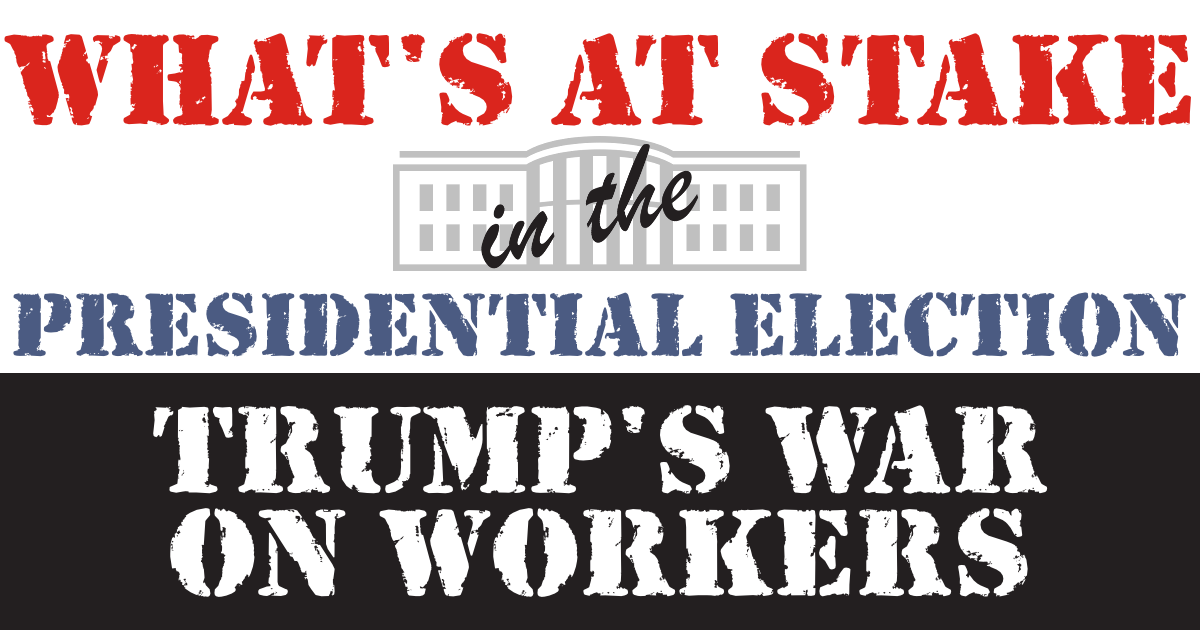 At the 2019 UE Convention, UE delegates declared that “it is critical that working people remove the anti-labor and racist Trump from office.” While Trump’s inflammatory tweets often make headline news, his attacks on workers have received much less press attention.

A “Destructive” Labor Board

“This is the most destructive NLRB I’ve seen in my 40 years in UE,” said UE Director of Organization Gene Elk. “We’re looking at an awful election procedure, with very delayed elections and bad bargaining units. The board is attacking just about every protection that unions have.”

Trump has stacked the National Labor Relations Board — the federal agency charged with protecting workers’ rights to join unions — with corporate lawyers. The board has overturned precedent in more than twenty cases, in each case favoring employers over workers.

The Trump NLRB has undermined collective bargaining by increasing employers’ ability to make unilateral changes to union contracts, allowing them to withdraw union recognition when contracts expire, and expanding management rights. They have narrowed the scope of protected concerted activity, allowing employers to more easily discipline or fire workers who speak up for themselves and their co-workers. They have undermined the right to strike and made it more difficult for workers to organize unions.

Under a ruling issued by the Trump labor board this summer, bosses now have the right to enforce “civility codes” on stewards, social media posts, and picket lines. They can discipline stewards who use “salty language” in grievance meetings, or any union member who posts a comment on social media or yells something on a picket line that management considers “uncivil.”

A Corporate Lawyer in Charge of the Labor Department

In 2019, Trump appointed Eugene Scalia as Secretary of Labor. His qualifications? Twenty years as a corporate lawyer, attacking labor laws on behalf of Wall Street and some the country’s largest corporations.

He helped Walmart defeat a Maryland law that would have required the company to either offer healthcare to its workers or offset the costs that the state incurred for insuring Walmart workers through Medicaid. He helped Boeing use a threat to move jobs to a “right-to-work” state to extract concessions from unions. He defended UPS against charges of discrimination, helping to kill a class-action lawsuit brought by workers under the Americans with Disabilities Act.

Scalia famously said that “ergonomics is quackery” as he helped defeat regulations designed to prevent repetitive stress injuries. He wrote in a Wall Street Journal op-ed that “ergonomic regulation will force companies to give more rest periods, slow the pace of work and then hire more workers” — as if that were a bad thing.

Under both Scalia and his predecessor, Alex Acosta, the Trump labor department has made numerous regulatory changes that favor employers, including stripping overtime protections from many workers.

Trump’s first appointment to the Supreme Court, Neil Gorsuch, was the deciding vote in the Janus decision, which imposed “right-to-work” open shop conditions on public-sector workers across the country, in an attempt to weaken their unions. Gorsuch was also the deciding vote on a case that allows employers to evade class-action lawsuits, the only realistic mechanism that non-union workers have to enforce labor regulations like overtime or prevailing-wage laws.

In addition to Trump’s appointments to the Supreme Court, he has been busily stacking the lower federal courts with anti-worker ideologues, which will likely result in anti-worker decisions at all levels of the federal court system for years to come.

Where Are the Jobs?

In 2016 Trump campaigned on a promise to create good jobs, and until the COVID-19 pandemic hit this year, the economic expansion which had begun under Obama continued to keep unemployment low. But looking more carefully at Trump’s promises tells a different story.

Trump promised that he would stop factory closings if elected, but he did little when General Motors announced in late 2018 that it was closing four U.S. plants. One of those four plants was eventually spared — but after a strike by the UAW, not presidential action.

Trump talked tough on trade, but his renegotiation of NAFTA included only modest improvements for workers, and labor enforcement mechanisms with real teeth were only included in the agreement after the Democratic Congressional majority elected in 2018 insisted that he go back to the table. His “trade war” with China was considered a blunder by many business executives and foreign policy exports. It created supply shortages that actually cost U.S. jobs, as did his imposition of tariffs on steel and aluminum from Canada and Mexico.

Trump also promised a massive investment in infrastructure to create construction and manufacturing jobs, but instead used his political capital to push through a massive tax cut for the rich and corporations — a windfall that was almost entirely returned to shareholders, rather than used to create jobs.

As long-time labor reporter Steven Greenhouse concluded in an op-ed for CNN in August, “if you are a blue-collar worker who cares about your economic well-being and opportunities for your children, Trump is not your friend.”