RMEP Workers Shut It Down! 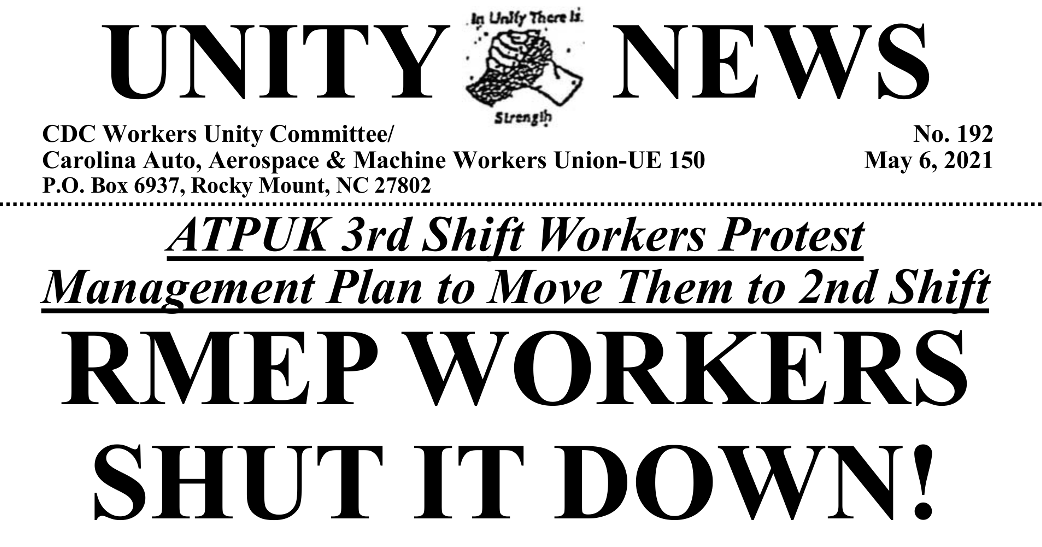 Third-shift workers at the Cummins Rocky Mount Engine Plant shut down production last week, winning a reversal of management’s plan to force them onto second shift.

The UNITY NEWS reports that “On Tuesday, April 27, Cummins RMEP 3rd shift workers in Assembly/Test/Paint/Upfit/Kitting stopped production in protest of Plant Manager John Judd's unilateral announcement that 3rd shift would be permanently moved to 2nd shift starting July 12, 2021. The managers informed the Cell Team Leaders of the company's plan at a 9 PM shift start meeting. This news shocked the CLTs, who then took this news to the shop floor workers, who reacted with widespread disapproval.

“Team 1 workers walked to Team 2, who joined them in a workers protest march that continued through Teams 3,4,5,6,7,8 and 9. At Team 9, workers confronted Director Kamal Ganapathy, who asked them to go back to work to no avail. Management even tried to divide and conquer by telling some workers that others had returned to work, which was not true. Workers remained united. The work stoppage continued in Test/Paint/Upfit and Kitting as no engines came over from Assembly. After workers made it clear they would not run the line, management sent the whole shift home at 1 AM.

“The following evening, April 28, 3rd shift workers returned to RMEP. Judd and Ganapathy met with the CLTs and informed them that the move to 2nd shift was cancelled and a memo confirming this reversal would be forthcoming. Workers celebrated this news as a victory due to their collective action and unity.”

The UNITY NEWS is the publication of the CDC Workers Unity Committee, a pre-majority union that is part of the Carolina Auto, Aerospace & Machine Workers Union chapter of UE Local 150.