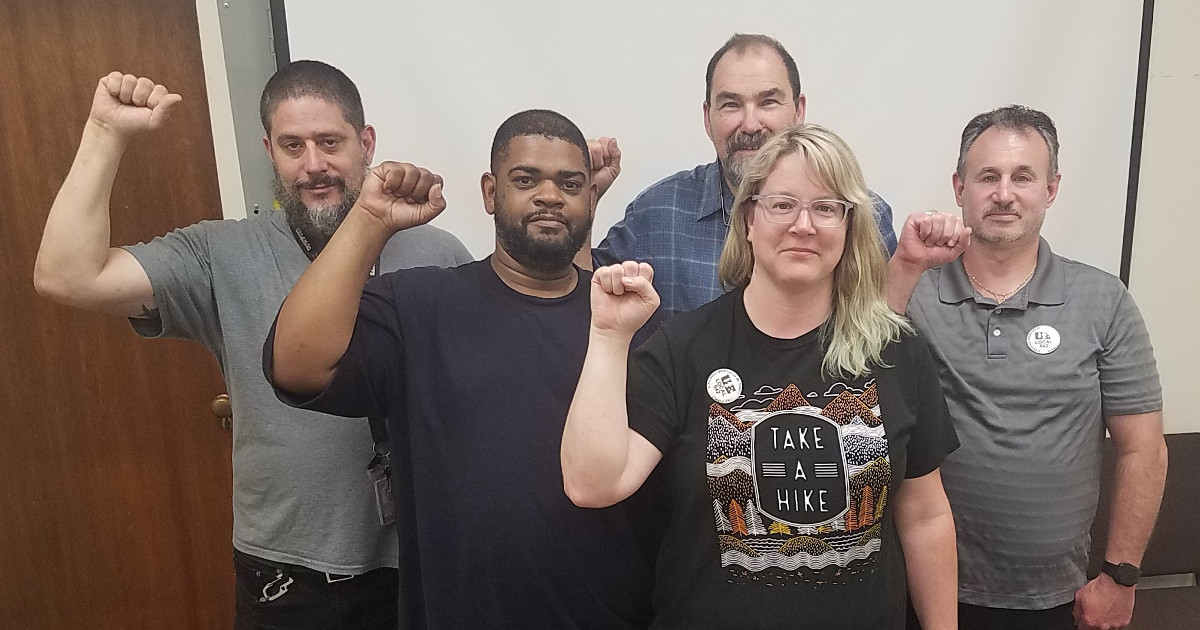 After one of the most contentious contract negotiations in recent years, UE Local 642 members who work for Harborcreek Youth Services ratified a new three-year contract that boosts wages by 13 percent over the life of the contract, including a 7.5 percent average wage increase in the first year.

The federal mediator convinced management to continue to bargain after the committee informed the mediator that they would recommend that the members reject the agency’s last offer and vote to authorize a strike.

“I am proud of how we advocated for and fought to protect our fellow union members. But, also how we respected and supported each other these past two months,” said Kate Iszkula, the local’s chief steward and a member of the negotiating committee. “Our strength, unity, and passion helped us overcome the challenges the agency presented. We are a strong team and our success demonstrates it.”

The Local 642 negotiating committee was determined to fight to increase the low starting wages, which had caused a high turnover at the agency over the years. The committee proposed a new six-year step wage plan instead of negotiating annual wage increases, which both parties had agreed to in previous contract negotiations. Any employee making more than the six-year wage rate will receive a 2.75 percent wage increase in each year of the contract.

“The union did a really good job securing a good wage scale that the agency never had over the last twenty years,” said Mike Hardner, the local’s financial secretary and a member of the negotiating committee.

Before the negotiations, the committee circulated a petition, demanding that HYS “treat us as ‘essential workers’ by paying us a ‘living wage’ and providing safe staffing levels in all of the units at all times.” A delegation of the members delivered the petition, which was signed by most of the members, to the agency’s CEO on the first day of the negotiations.

Throughout the negotiations, the members wore buttons that read “Living Wages & Safe Staffing” and stickers that read “Show Us The Money.”

The members were aware that the agency had received a $1.6 million Paycheck Protection Program (PPP) loan in 2020 of which only $180,000 went to the members in the form of bonuses and lost time for quarantining. The agency claimed that the rest of the loan, which was forgiven, went to pay pandemic-related expenses and an outstanding loan.

In addition to the new step wage plan, the negotiating committee was able to keep the members’ health insurance premium costs the same for the duration of the contract. Local 642 members pay some of the lowest health insurance premiums in the national union. An employee who is single only pays $10 per pay period and an employee with a family only pays $31 per pay period. However, the local did agree to raise the deductibles from $100/$250 to $200/$400 in the second year of the contract.

“We stressed the importance of the agency joining UE in supporting Medicare for All during the negotiations,” said Brian Desanto, the local’s vice president and a member of the negotiating committee. “The agency spends a lot of money for health insurance – around $1.7 million dollars per year, which is almost the same amount the agency pays in wages. Medicare for All would be a huge savings for a non-profit agency like Harborcreek Youth Services.”

Another contentious issue in negotiations was the local’s demand that the agency agree to one contract covering both bargaining units – a “permissive subject” of bargaining. After a protracted fight with the agency, the HYS maintenance workers and housekeepers organized into Local 642 in 2020. The agency insisted at that time that the new bargaining unit would have to have a separate contract, which was agreed to in July 2020. The new bargaining unit’s contract expired at the same time as the caregivers’ contract.

The committee also negotiated language that the agency “may not discipline, discharge, threaten, refuse to hire or otherwise discriminate or retaliate against an employee” on the basis of such employee’s status as an individual who is certified to use medical marijuana.

“This being my first time being on the negotiating committee, it was pretty strenuous, but well worth it when you can help others with their finances for them and their families” said Jason Williams, the local’s president. “I was happy to be on board and I’ll feel grateful to be able to do it again.”