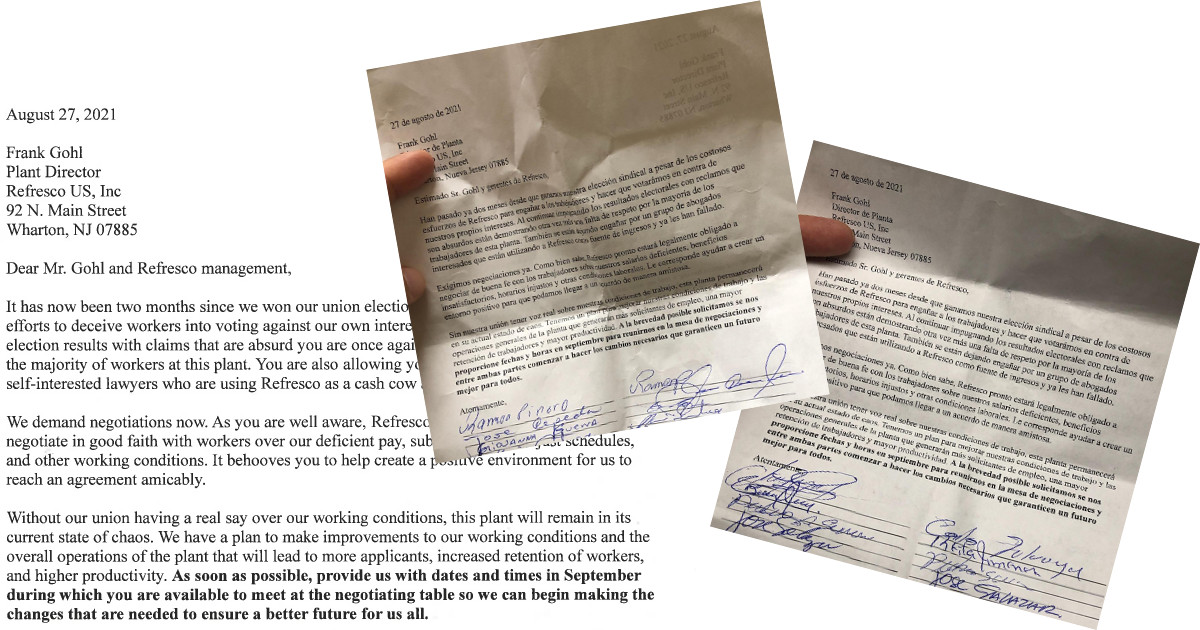 Last Thursday, 20 workers at the Refresco bottling plant marched on company managers, demanding that the company begin negotiating with their union, UE Local 115.

The workers delivered a letter signed by a majority of their coworkers that called out Refresco’s lack of respect, and asserted that without workers having a real say over their working conditions, the “plant will remain in its current state of chaos.”

The 250 workers at the plant voted to join UE in an NLRB election in June. However, rather than negotiating with its workers as it is now legally obligated to do, Refresco has instead filed a series of frivolous legal appeals, most of which are complaints about the behavior of its own company observers during the voting process.

Refresco is partially owned by PAI Partners, a private equity firm based in Paris. As journalist Matthew Cunningham-Cook reported last month in The Intercept, “About 8.8 million workers — or roughly 5 percent of the national workforce — work for portfolio companies of private equity firms in the U.S. Private equity is known for colossal executive compensation, little regulation, and eager public pension fund and endowment investors.”

Refresco workers have been reaching out directly to investors in Refresco parent companies, beginning with the Teacher Retirement System of Texas (TRS). At the TRS board meeting on September 17, 2021, Anthony Sanchez, a Refresco Wharton Machine Operator III for 15 years, told the members of the pension board, “I would like to talk to you as investors about the conditions that we are working under there.  We are working in unsafe conditions, with low salaries. The health insurance is bad, with very high deductibles, and high co-pays. Refresco is refusing to sit down with us and negotiate a fair contract.”

Another Refresco Wharton employee, Machine Operator IV Diana Acevedo, told the trustees, “Refresco does not care about our well being. They make us continue working during the pandemic with a lack of appropriate protection and sanitary supplies.  There is a lot of favoritism in the plant.  They change the schedules from morning to night at the last minute.  They force us to work while we are ill and have a fever and are clearly sick. We want what is in the best interest of the workers.  We want to be part of the union.”

UE Local 115 will continue their campaign for union recognition and negotiations through a variety of means. The next PAI/Refresco investor that the workers will speak to is the Pennsylvania Public School Employees Retirement System, at the pension’s board meeting on October 8 at 10am.