John Miles, a member of UE Local 506’s executive board, addressed a “Thriving PA” Town Hall meeting held over Zoom on the evening of March 31. The topic was what the THRIVE Act, a plan to create tens of millions of good, union jobs while addressing the threat of climate change through a Green New Deal, means for the state of Pennsylvania.

Miles explained that the good jobs at Wabtec that UE Locals 506, 610 and 618 have won through decades of struggle “are the kind of good jobs that a lot of people fear will be lost as we deal with climate change.” However, as one of the common uses for the locomotives built by Local 506 members is hauling coal, the company has already seen declining orders, leading to hundreds and hundreds of layoffs.

“Our union and our community have lived through previous economic transitions that completely failed us,” Miles said. “Automation, deindustrialization and globalization have had a devastating effect on workers and working-class communities in Pennsylvania and across the country. Without a strong commitment to a just transition, we will be left behind again.”

But, as Miles noted, “that is not how it has to be.” According to a report by the Political Economy Research Institute at the University of Massachusetts, implementing the 10-year THRIVE investment agenda in Pennsylvania would generate about 372,000 jobs in the first full year of the program, totaling over 3.7 million jobs in 10 years. 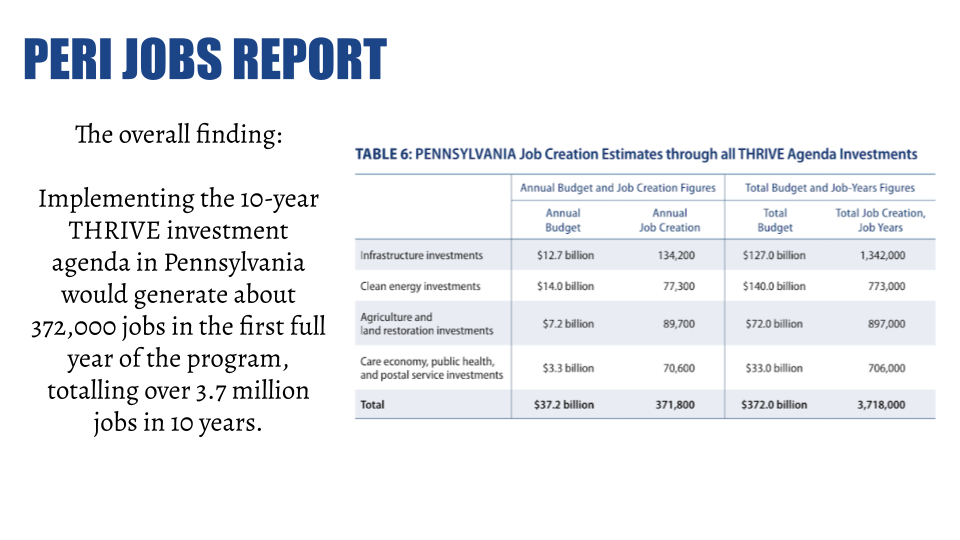 Miles pointed out that green rail is an important component of this jobs plan. “A Green New Deal that encourages increased transportation of goods and people by rail will reduce carbon emissions, and it will also preserve and create good, union jobs like ours,” he said. “Ensuring that railroads upgrade their aging, inefficient and polluting locomotives with new energy-efficient models will likewise create good jobs while improving the air that people breathe in distressed communities.”

Kearni Warren of SEIU Healthcare Pennsylvania, another panelist on the town hall, spoke about how the care industry would also be impacted by the THRIVE Act. Warren, who works as a home care provider for her 97-year-old grandmother, described her job as “challenging and demanding yet noble and essential work,” but pointed out that “that’s not reflected in the way we are treated … our own health and well-being are not provided for [and] we work in poverty.” The THRIVE Act would help home care workers like her (home care is the second-largest industry in Pennsylvania) achieve their goals of $15 an hour, a union, healthcare benefits, and adequate personal protective equipment.

Other town hall panelists addressed the THRIVE Act’s commitment to investing in Black, Brown, and Indigenous communities, combating environmental injustice and ensuring healthy lives for all, and reinvesting in public institutions.

Close to a dozen UE members and staff attended the event. Local 610 President Antwon Gibson, noting that he “grew up right next to the steel mill in Braddock PA,” wrote in the chat that “We need to hold all local, state and federal politicians accountable for not being an advocate for change in all communities, especially Black communities.” During a “story-share” exercise, Field Organizer George Waksmunski said the Green New Deal and the THRIVE Act will allow us to continue living on our plant and with dignity, and that change will only come when all workers from all backgrounds organize at their workplaces, which will create the power and be the vehicle for this transformation.

Miles concluded his remarks by pointing out that “Green rail is a concrete example of how the Green New Deal can address the fear of job loss in working-class communities through a commitment to a just transition. It is a practical solution to climate change that will put people to work and improve our communities. If we come together, and build the Green New Deal on programs like this across our economy, workers and communities can demand and win a future of good jobs on a livable planet.”