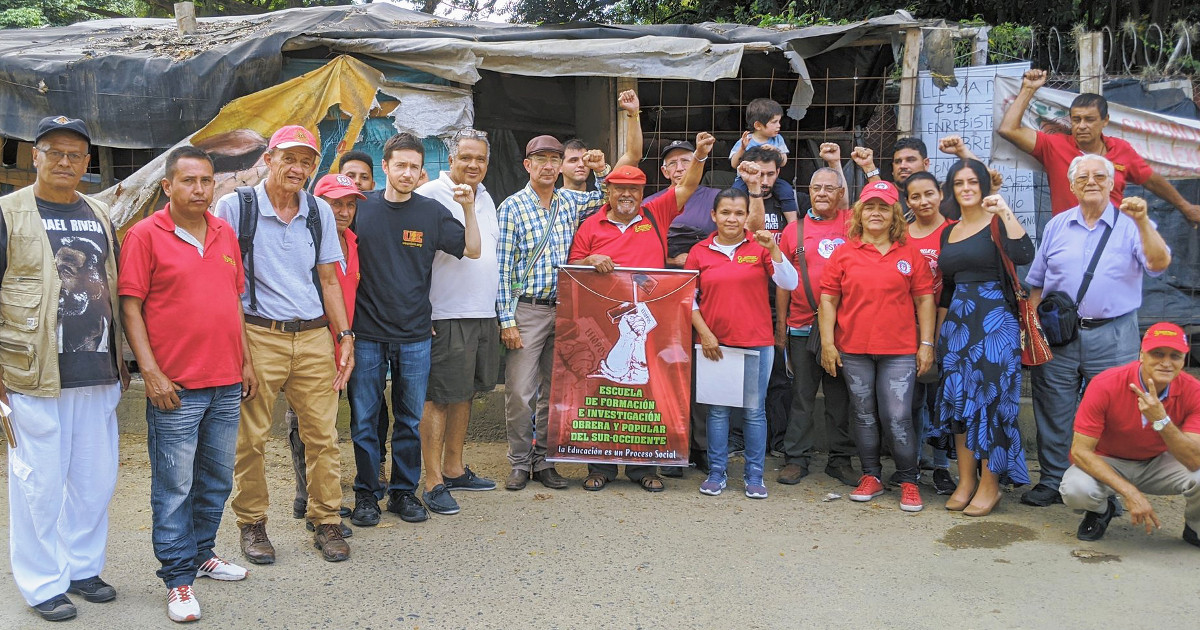 On June 19, voters in Colombia made history by electing Gustavo Petro as their next president. Backed by virtually all of Colombia’s labor movement, Petro ran on a pro-worker program aimed at reducing inequality in one of the most unequal economies in the world.

Petro’s running mate, Francia Márquez, will be the country’s first Black (Afro-Colombian) vice president and only the second woman to hold that office. As New York Times reporter Julie Turkewitz wrote in May, “Ms. Márquez’s rise is significant not only because she is Black in a nation where Afro-Colombians are regularly subject to racist insults and treatment and must contend with structural barriers, but because she comes from poverty in a country where economic class so often defines a person’s place in society.”

To learn more about the significance of this election for working people, the UE NEWS spoke to UE Field Organizer John Ocampo, whose parents are from Colombia, whose extended family lives there, and who visits the country frequently.

Petro is “someone who does not come from the traditional families who've always governed the country and owned everything,” said Ocampo. “The class of people who've been governing since the nominal independence of Colombia over 200 years ago has finally lost an election ... it is a significant change. He’s a President who will represent the people of Colombia, who've never really had a voice at the national level.”

Márquez, he added “is an Afro-Colombian who comes from poverty, who's faced death threats, who was an environmental activist, who worked as a maid, as an artisanal miner … she really comes from the bottom [of society].”

Since Colombia declared its independence from Spain in 1810, it has mostly been governed by a two-party system not unlike our own — while control of the government passed between the Liberal and Conservative parties, most working people saw little benefit from those changes.

The reason for this is simple: both parties were run by wealthy elites. As Ocampo explained, “you have these politicians whose dads were presidents, or grandfathers were presidents, or their family owns a national newspaper, or they’re one of the largest landowners in Colombia.”

Due to the stability of this two-party system there is “a lot of talk about Colombia being one of the longest-standing democracies in Latin America.” In reality, Ocampo said, “it’s never been a democracy. The people have never ruled the country.”

In fact, during the period from 1958 to 1974 known as the “National Front,” the two parties simply agreed to rotate power every four years. “Elections were just for show,” said Ocampo, “because the other party didn’t run a real candidate.”

As a result of this largely uncontested rule by elites, Colombia has become one of the most difficult countries in the world for working people — and far and away the most hazardous for those who stand up and try to improve their situation. It has been consistently ranked by the World Bank as one of the most unequal countries in the world, and the International Trade Union Confederation’s 2022 Global Rights Index named Colombia as one of the ten worst countries for working people and “the deadliest country for workers and union members.”

Out of this stark inequality and violent repression, several armed insurgencies arose over the latter half of the last century, leading to decades of violence — which was exacerbated by “Plan Colombia,” a U.S. program that pumped $10 billion of military aid into the country under the Clinton, Bush and Obama administrations.

“I think a lot of people expected things to get better because they'd always been told that all the problems in Colombia could be laid at the feet of the armed left-wing guerrillas,” said Ocampo. “And once the largest guerrilla army was demobilized people said well, where’s the change? And it turns out people woke up to the fact that [the conflict] was actually not at the root of the problem, that it was a symptom of the problem.”

In November of 2019, Ocampo represented UE on a 2019 delegation to Colombia organized by US Labor Against the War and the Alliance for Global Justice.

They arrived in the middle of a “National Strike,” the largest sustained popular protest since the 1970s. “There were millions of people marching in the street all throughout the country,” Ocampo reported. The government, whose finance minister had described Colombia’s minimum wage of just under $270 per month (for a 48-hour work week) as “ridiculously high,” had proposed a series of anti-worker policies. These included raising the retirement age, reducing the minimum wage for young workers, privatizing the country’s retirement system, and shifting the country’s tax burden further from the wealthy onto workers.

The strike, which had initially been called by unions but embraced by the entire working class, was successful in preventing the government from implementing most of its program. However, plans for continued mobilization in the spring of 2020 were interrupted by the arrival of the COVID-19 pandemic.

By the spring of 2021, however, the government’s poor handling of the pandemic provoked another round of widespread protests.

“For the first time that I can remember, two things happened,” Ocampo said, “which is that people who were previously apolitical said ‘enough is enough’ and joined the protestors. Even people in my family who would never talk politics, you know, on Facebook or WhatsApp they’re changing their icons [to support the protests] and that was astounding to see, personally.

“The other part of it is that internationally Colombia started getting criticized for human rights violations, for repressing protest and cracking down on peaceful demonstrators, even in places like the New York Times.”

Petro’s campaign had to overcome not only hostility from Colombia’s political and media establishment, but intimidation by employers and very real fears of violence.

During the conflict with the FARC, the government and employers encouraged the formation of right-wing paramilitary groups, which have been shown to have close ties to the country’s military and political elites. (These paramilitaries were, and continue to be, responsible for the vast majority of killing of union leaders in Colombia.)

Both Petro and Márquez faced death threats as they campaigned; at a rally in May Márquez was targeted by a green laser pointer. These were not idle threats: over 50 trade unionists and other social movement leaders were assassinated in Colombia in 2022.

Employers also got in on the act, holding captive audience meetings similar to the ones employers in the U.S. hold to convince workers not to organize unions. According to Ocampo, employers were “gathering workers and telling them, look, you're free to vote for whoever you want … but we highly recommend that you don't vote for Gustavo Petro if you want what's best for this country and for yourselves.”

Ocampo reported that “There were even some businesses that were asking people to sign contracts that would be declared null and void if Petro won, the so-called Petro clause.”

Despite this intimidation, the working people of Colombia elected Petro and Márquez, giving them the most votes in the first round of elections on May 29 and a majority in the June 19 runoff election.

“The good thing about this President is that he hasn't won an election in a vacuum, he hasn’t parachuted into power without any real support on the ground” said Ocampo. “He's actually been catapulted into power by the people who've been marching for several years now in the millions.

“The protests, they achieved some of their immediate aims, which was to defeat these proposed reforms, but longer term, they really did help to push people … and show them that, you know, you deserve more and you need to be willing to fight for it, if you want to change this country. And you should not be afraid of voting for something different than what you've always voted for.”

The new administration’s program includes increasing the minimum wage, protecting collective bargaining, and carrying out long-overdue land reform — less than one-half of one percent of Colombian landowners control almost half of the available land, and almost 65 percent of the cultivated area is used for capitalist agribusiness.

Ocampo noted that in order to implement this program, the new administration will now have to fight “the true owners” of the country, not just Colombian capitalists but international forces, including the United States government. “The United States has seen Colombia and the rest of [Latin America] as its backyard for a few centuries now,” he said, “and they don't want to see a change. Their entire model for the third world really is to keep wages low and have the third world serve as reservoirs of cheap resources.” (On July 20, General Laura Richardson of the U.S. Southern Command told the Aspen Security Forum, “This region is so rich in resources. It’s off the charts rich.”)

“It's going to be a tough fight to enact real changes that people actually feel in the day-to-day,” concluded Ocampo, “but there are millions of people now who are conscious of the need to move beyond what they've had before, and willing to fight for it.”

Some of Brother Ocampo’s remarks have been lightly edited for clarity.