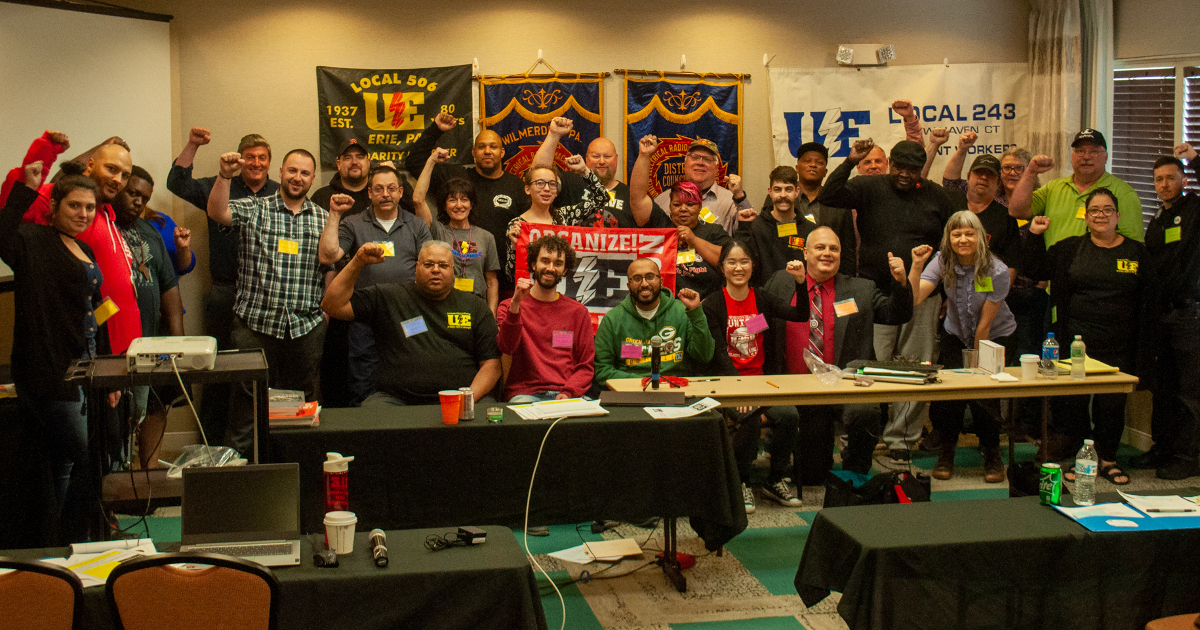 Chanting “¡Sin Unión, No Hay Solución!” (without the union, there is no solution), UE members from six states gathered outside the Refresco bottling plant in Wharton, New Jersey on a beautiful Sunday morning in late April.

Refresco workers won a National Labor Relations Board last June, forming UE Local 115. However, after nine months of legal appeals by the company, the NLRB threw out the election on a technicality, forcing the workers to vote again — and to endure another barrage of union-busting.

“Don't listen to the bosses,” said Margaret Dabrowski, Local 222, in a video message recorded for the workers underneath the big Refresco logo on the side of the building. “You need to keep fighting! Don’t give up, you'll get there!”

“You know you need a union,” added Megan Hedrick, Local 123. “No matter what the company says, you know they're not treating you right, you know you deserve better, way better than what they're treating you now. And they could! They're making record profits while you're starving and working your butts off! It's not fair — you need a union, and we're here to support you from states away.”

Along with Locals 123 and 222, members of Locals 119, 329, 610, 613 and the MIT Graduate Student Union/UE recorded video messages of solidarity for the Refresco workers, as did Eastern Region President George Waksmunski. 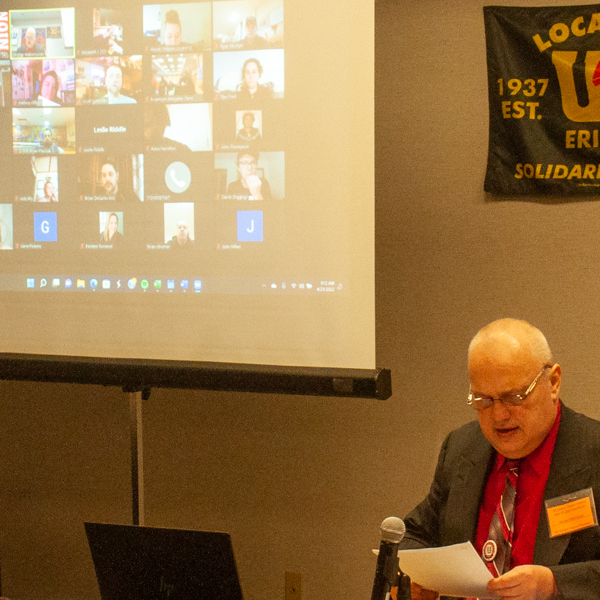 The UE members gathered at Refresco were delegates to UE’s first-ever “hybrid” regional council meeting — conducted both in-person and on Zoom the weekend of April 23. Approximately two dozen delegates and guests gathered face-to-face in Denville, just down the road from the Refresco factory, and another thirty or so joined remotely.

In his president’s report, Waksmunski reported on having visited every state in the region and as many locals as he could during his first year in office, and showed a compilation of photos and videos from his travels. Reflecting on the theme of the council meeting, “UE wins and the UE Eastern Region grows in times of challenge,” Waksmunski declared that “We are the future of the labor movement because we are a member-run union, because we are not beholden to the Democratic Party or Republican Party.”

He “We believe in fighting our fight with the bosses on the shop floor. That’s where your power is,” However, he also emphasized the importance of having “a consciousness that the fight has to go beyond the four walls of your local. We’ve got to have allies, build relationships with other organizations who are like-minded, who aren’t controlled by corporate America.”

“UE principles are at the core of how we fight back”

UE Director of Organization Mark Meinster reported on “an incredible amount of struggles all over the country.” He pointed out that, although “employers were happy to tell us we’re heroes, tell us we’re essential,” during the pandemic, they have turned around and closed plants, fired union leaders, and demanded concessions.

“It’s UE principles that are at the core of how we fight back” against these indignities, Meinster said. He noted that some of the most dramatic recent union wins — the victory of the independent Amazon Labor Union in Staten Island in April and the hundreds of Starbucks stores that are organizing across the country — are being driven by the workers in the shop, in line with UE principles of rank-and-file control. 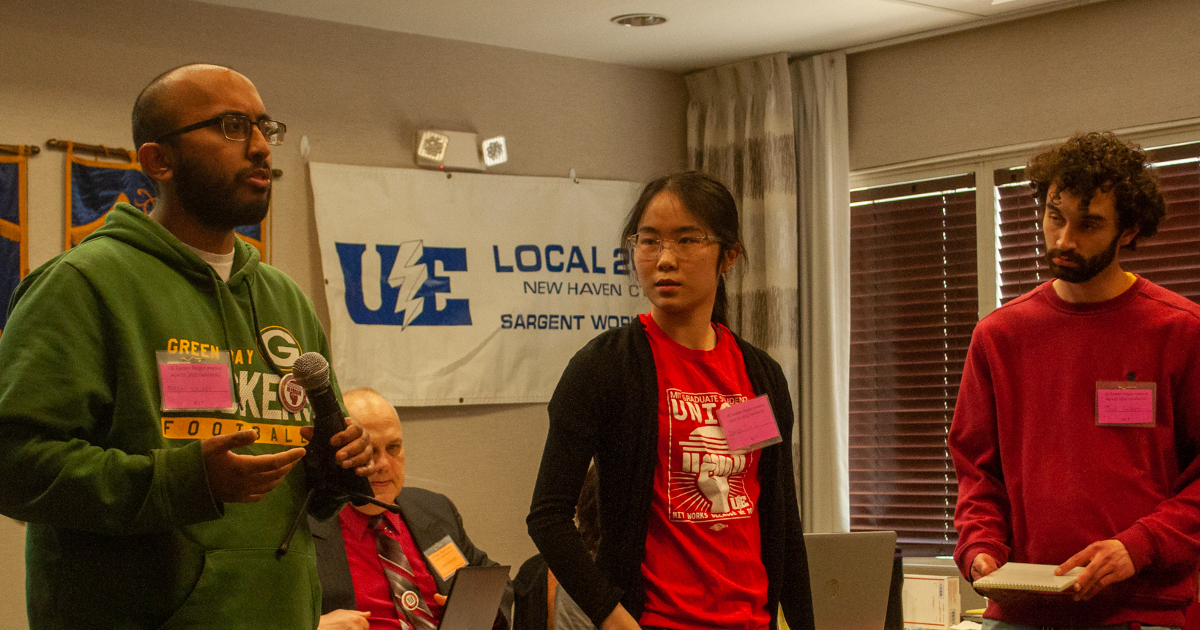 Meinster introduced three leaders from the successful UE organizing campaign at MIT, where “a rank-and-file, worker-led campaign” saw hundreds of graduate workers taking leadership to win their union. Belinda Zou Li, Thejas Wesley and Josh Talbot shared some of the reasons why they organized with UE, and their experiences dealing with MIT’s union-busting campaign.

During shop reports, delegates heard how locals are addressing the “times of challenge” of the council meeting’s theme. 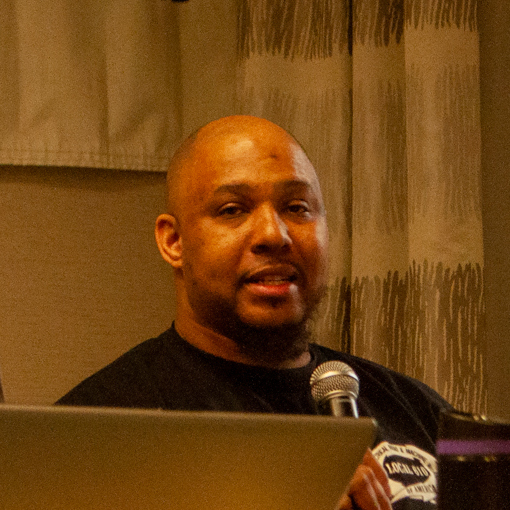 Eastern Region Vice President and Local 610 President Antwon Gibson and Local 610 Vice President Jeff Kohler reported on their contentious negotiations with Wabtec. The company is demanding sweeping concessions and announced on April 18 their intention to close the historic facility in Wilmerding, PA. (Local 610 represents workers at two facilities outside of Pittsburgh: Wilmerding and Greensburg.)

Kohler described the company’s proposals to “schedule and mandate overtime at their discretion, assign our bargaining work to supervisors,” and be able to “fire you if you’re sick” as “slapping us in the face, especially after we were deemed essential” during the pandemic. Gibson related how at the most recent Local 610 membership meeting a motion to authorize a strike “sparked a fire in the rest of the membership” and led to an unanimous strike authorization vote. Gibson thanked everyone who had reached out in solidarity and invited everyone to attend a rally on April 30, the day before the Local 610 contract expires.

Local 170 Recording Secretary Leslie Riddle reported that West Virginia’s Republican state legislature passed a law in 2021 prohibiting public-sector workers from having union dues deducted from their paycheck. But Local 170 is still fighting and winning grievances while re-signing members into an alternate dues-payment system.

During the political action report, Dominic Harris, Local 150, reported on the activities of the Eastern Region’s newly-formed Political Action committee, which included getting the region to endorse the NY Health Act, legislation in New York to create a state-level “Medicare for All” style single-payer healthcare system. He also reported on Local 150’s work with the Southern Workers Assembly and the North Carolina Medicare for All Coalition.

Vice President Gibson told delegates that State Representative Summer Lee, who has been a steadfast UE ally since her election in 2018, is running for the Pittsburgh-area congressional seat held by Mike Doyle, who is retiring. Gibson’s spoke about how Lee “walked side by side with us in the cold” during the 2019 strike against Wabtec by Locals 506 and 618, and many other UE struggles as well. Delegates reaffirmed the executive board’s decision to endorse Lee.

Donations to Locals in Struggle

The council made a $2500 donation to Local 610’s strike and defense fund and a $1500 donation to graduate workers at Indiana University who are striking for recognition of their UE local. They also voted to set aside $2500 to send UE members from the Eastern Region to West Virginia to assist Local 170.

Delegates approved a motion to pay for lost time and hotel costs for up to six members from the Eastern Region to attend the June 18 Moral March on Washington, led by long-time UE ally Rev. Dr. William Barber II. (The National Union will be covering transportation costs for UE members who wish to attend). Erica Collins, Local 119, who will be coordinating UE participation in the march, urged all UE members and locals to attend the march.

The council also held a moment of silence for Kelly Robtoy, who passed away last fall. Robtoy was a UE Field Organizer who had previously served as president of UE Local 208 and secretary-treasurer of the Northeast Region. Waksmunski, who attended her funeral, reported that the priest spoke at length about Robtoy’s love for UE. 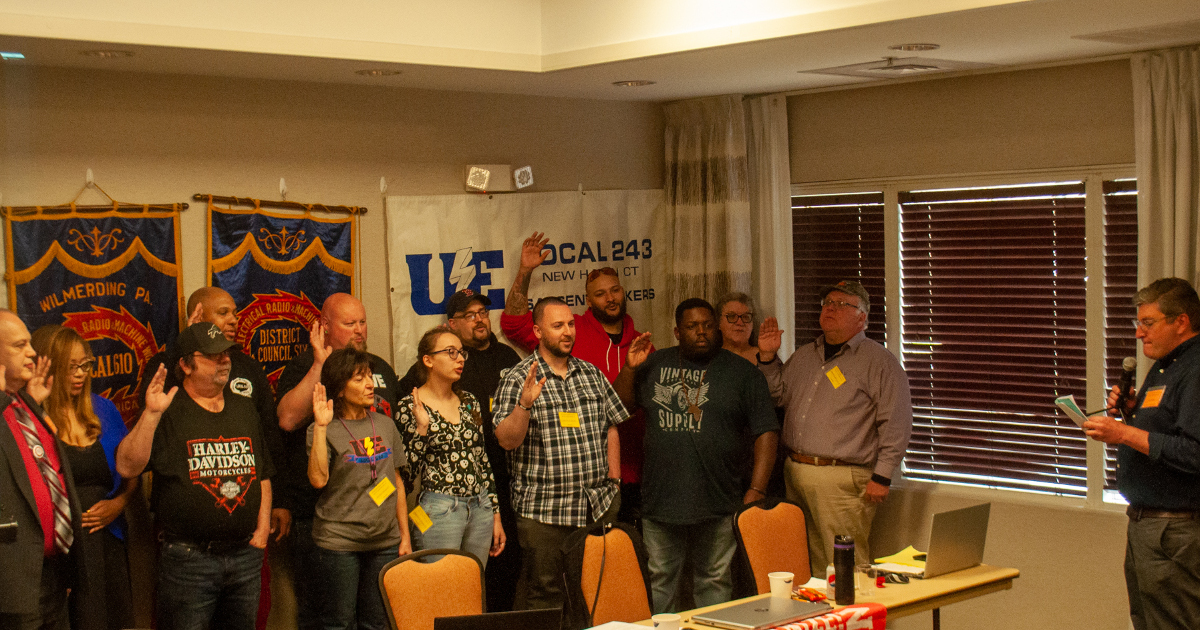