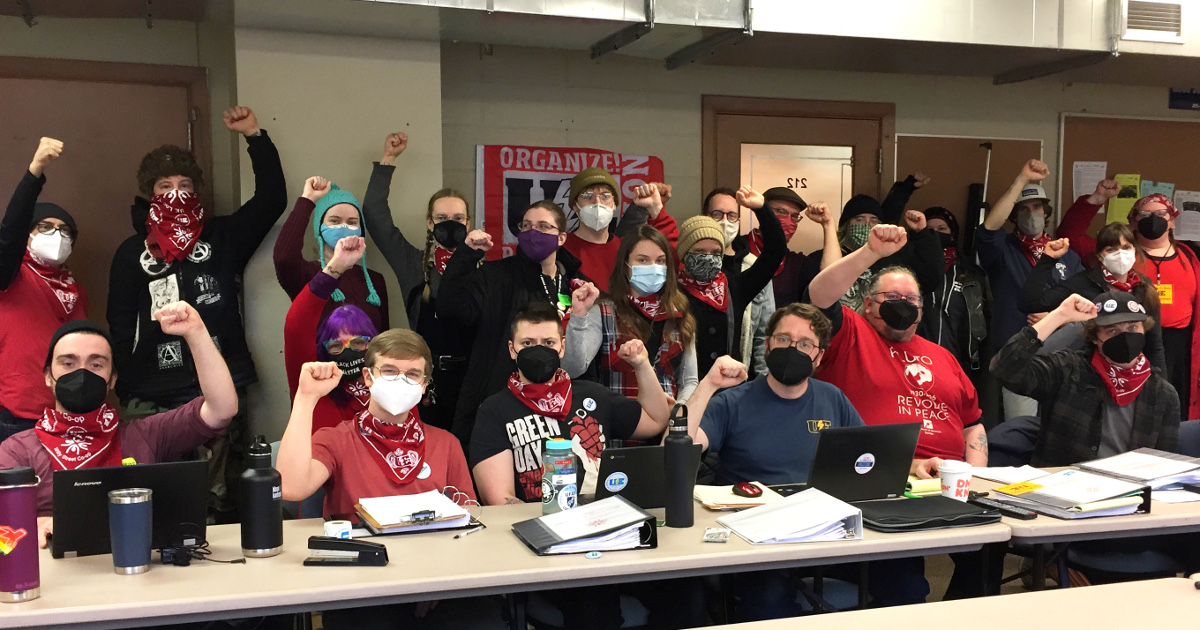 Local 1186 members gather behind their negotiating committee on February 22 to demonstrate to management, over Zoom, their support for the union’s bargaining goals.
May 7, 2022
Madison, Wisconsin
By Embry Whitmore, UE Local 1186

As a union, we started strong by involving our membership right off the bat. Before bargaining began, the union organized and sent out a comprehensive survey to all bargaining unit members. Union officers sorted through piles of paper responses to generate the data then used to formulate our bargaining platform. It was important to us to make sure we represented as much of our bargaining unit in our platform as possible.

The local’s executive board met with management three days a week for three weeks, and fought hard on a platform of increasing wages for all, improving sick leave benefits, and protecting our health insurance plan. Although we hoped we could negotiate at a physical table together, the union bargaining team met in person at the Madison Labor Temple, while Co-op management called in via Zoom.

Every night after bargaining the union’s negotiating team wrote comprehensive bargaining updates for the rank and file, including a summary of what we accomplished that day, and what items were of concern, to make sure all were kept well informed throughout the process. This was emailed out to all bargaining unit members with opportunities for people to ask questions, and union officers traveled to the grocery store sites after bargaining to post paper copies and answer questions before stores closed. Communication and transparency were key to our strategy, as was mobilizing our bargaining unit when things got tough. 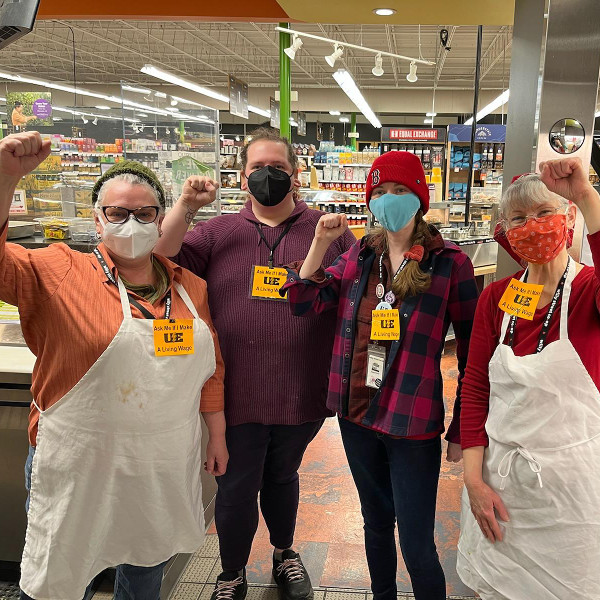 Local 1186 members wearing “Ask me if I make a living wage” stickers.

During negotiations on wages, management countered our initial proposal with one we found to be uninspiring. We put out the word to our members, and the next working day the three grocery store locations had employees with bright neon “ask me if I make a living wage” stickers on our shoulders and aprons. This prompted an impressive rally and show of solidarity and support from customers and the public, who flooded the comment box at the stores with comments urging management to improve the conditions of their staff.

In the end, the contract we negotiated was a significant success. We negotiated a 20 percent average increase in wages for all employees across the life of the two-year contract, increased the sick time available to all full-time workers, protected the health insurance that so many of our co-workers rely upon, and reduced the probationary period for new employees from 90 days to 60 days, and much more. The contract was ratified by an overwhelming majority of the union.

Local 1186 was able to involve and engage their members in contract negotiations in no small part because of the work of their contract support committee (CSC), a group of members who were not on the bargaining committee but helped maintain communication with the membership. Every member of the bargaining committee had individuals on the CSC that they communicated with regularly, and the CSC members had specific lists of workers to communicate with.