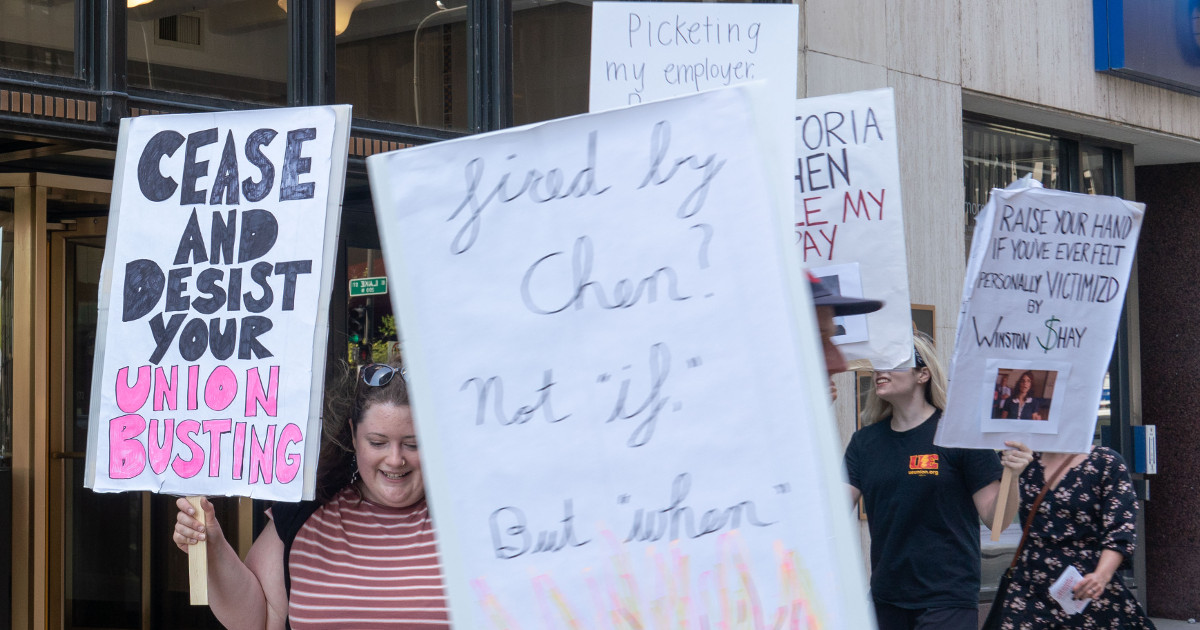 Hudson workers picket their corporate headquarters in Chicago in May.
September 23, 2022

On July 28, the National Labor Relations Board counted the votes of a union election held for approximately 200 workers at the legal services firm Hudson Institute for Process Research (HIPR). All but one of the workers voted for UE.

The story of Hudson workers is a story of courageous worker perseverance in the face of wanton lawbreaking by their employer.

Hudson workers, who prepare legal documents to assist in immigration cases, first approached UE about organizing prior to the COVID-19 pandemic. Workers complained about low wages and a bonus system that was so complicated that no one could figure out how it worked. Workloads had become burdensome and the healthcare offered by their employer was so expensive that few people ever used it.

At that time, the company operated out of in-person offices in Pittsburgh, Chicago, Ann Arbor, MI, and several smaller locations. When the pandemic hit, the UE organizing committee organized a petition demanding the ability to work from home. That petition, and a subsequent one demanding extension of the policy, were successful. Workers continued to exercise their newfound collective power, winning the right to work from home on a permanent basis, an extra holiday, and an increase in the employer’s healthcare contribution from 50 to 70 percent.

With management now hiring workers from all over the country, Hudson became UE’s first-ever fully-remote (and effectively nationwide) organizing campaign. Despite the challenges that this presented, Hudson Workers United were able to sign up a supermajority of their co-workers and filed for union recognition in July of last year.

Their employer responded with frivolous legal challenges which pushed the election until late December — and then prevented the NLRB from counting the ballots until this past July, more than a year after workers filed for representation.

In the meantime, Hudson’s owners, Victoria Claire Chen and her husband, Winston Shay (a.k.a. Bing-Yu Hsieh), went on a spree of illegal union-busting, firing UE leaders and transferring work to shell companies in an attempt to evade the union. Many Hudson workers have also filed wage theft claims against Hudson.

While still awaiting their election, Hudson Workers United recorded a video for UE’s 77th convention, held virtually last fall. “We work long hours, often more than forty hours a week, to make sure that we meet our clients’ immigration needs,” said Maddie Cupak. “We love what we do and we take pride in our work, but we believe that all workers deserve a voice on the job,” added Charlie Miller.

In May, workers traveled to Chicago to picket the firm’s downtown Chicago offices. Carrying signs reading “Law Firms Should NOT Break the Law” and “Cease and Desist Union Busting,” Hudson Workers United members demanded that the company reinstate workers who have been illegally fired and settle wage theft and unfair labor practice charges that employees have filed against the company.

“We’re tired of the illegal union busting that’s occurred over the past year, so we’ve decided to take the fight to them and show them just how strong we are,” said HWU leader Switz Castro.

The workers were joined by Chicago Alders Michael Rodriguez and Andre Vasquez, and also received support from long-time UE ally Congressman Jesus “Chuy” García, who was represented by a staff person and posted a message of support on social media later in the day. “As a former paralegal, I know it can be grueling work,” he said. “Paralegals at Hudson Legal have said loud & clear that they want a union. A law firm of all places, should know that the right to organize is the law of the land. I join with Hudson Workers United in their call to end the retaliation!”

While UE was formally certified by the NLRB on September 15, and the union is awaiting a decision on an injunction from the labor board in response to the employer’s law-breaking, Hudson continues its violations of labor law. “Throughout this campaign, the labor board has been frustratingly slow,” commented UE Director of Organization Mark Meinster. “Despite early indications that the Biden labor board might take violations of labor law more seriously, on this campaign we are not seeing much change.”

Despite the slowness of the labor board, UE is continuing to put direct pressure on the employer, engaging with groups at the large universities where Hudson obtains most of its clients — foreign academics and similarly situated researchers looking to gain permanent residency in the US. The company’s management practices have drawn widespread condemnation from the academic community, with labor unions and student organizations representing faculty and graduate students speaking out against the company on campuses including the University of Colorado, the University of Chicago, Rutgers, and the University of Illinois Chicago, among others.