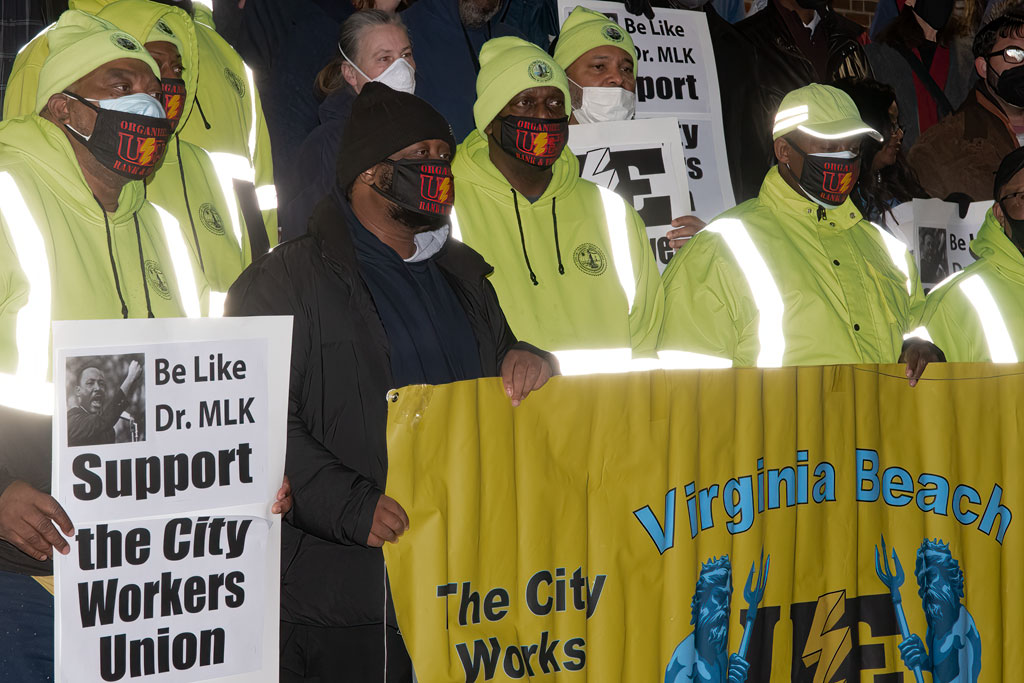 Virginia Beach city workers held a rally and press conference at City Hall on Tuesday, January 18, demanding a real voice for safety, dignity, living wages and an end to institutional racism on the job. The members of newly formed Virginia Beach City Workers Union, UE Local 111, were joined by supporters from the faith community in calling on the Virginia Beach City Council to pass a resolution in support of collective bargaining. 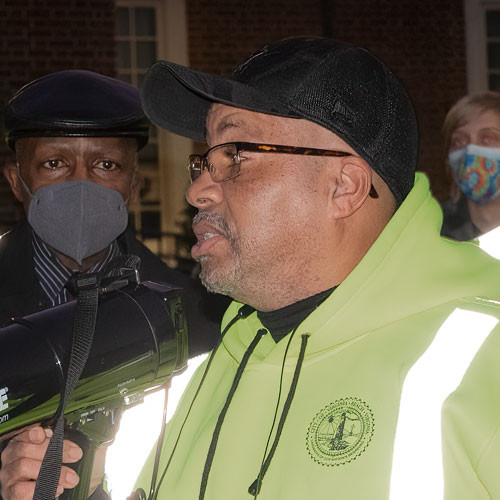 “We have to confront this systematic racism and racial disparity that manipulates the city’s decision making when it comes to social and economic equality,” said Alfred “Red” McClenny, who works in waste management for the Department of Public Works. “I feel collective bargaining is a step to help us bridge that racial divide.”

Minister Gary McCollum said, “As faith leaders in our beloved city, we implore you to search long and deep in your hearts to consider the many contributions from our city employees, who have maintained our city through a devastating pandemic, as a cherished tourist destination.” 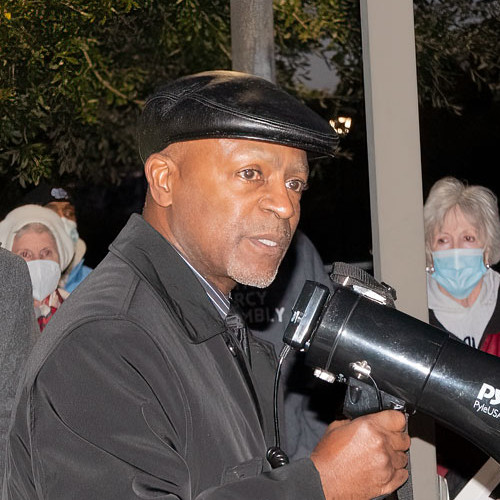 McCollom pointed out that “Last year’s Waste Management work stoppage highlighted for all of us the overarching concerns for city employees to have their voices heard around wages, systemic racism, benefits and working conditions. … There is now a historic opportunity to right the past injustices by allowing city workers to collectively bargain.”

A new law, effective since May of 2021, allows municipal workers in Virginia to exercise the right to collective bargaining once their city council passes a resolution supporting it. Five local governments across Virginia have passed such resolutions to date. The new law partially overturns the state’s ban on collective bargaining by public employees, a racist legacy of the Jim Crow era. 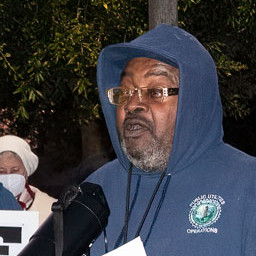 In November, the Commonwealth Institute for Fiscal Analysis released a report that found that nine out of ten city employees in Virginia Beach cannot afford to raise even a single child within the city limits. For the last several months, hundreds of city workers have quit their jobs out of frustration with the stressful work environment, low pay, and lack of a real voice.

“Working in the water department is becoming completely impossible due to so many staff leaving,” said Terry Green, who works for the city’s public water utility. “The city used to have eight water crews, now we are down to less than three crews to cover the whole city. We are working lots of overtime to cover all the water main breaks and keep the water running for the residents.”

With the Omicron variant of COVID-19 rapidly spreading, workers are now facing on-going dangerous working conditions. Patricia Thebert, a behavior specialist at the West Neck Intermediate Care Facility, said “In Human Services we are currently experiencing over a quarter of our staff testing positive with COVID due to the Omicron variant. The City has not done enough to keep us safe through the pandemic.” 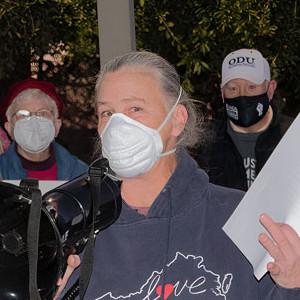 “When I read about Dr. King's support for workers organizing a union to challenge unsafe work conditions in Memphis, and their fight for collective bargaining over 50 years ago, I can’t help but be disappointed that we still have to fight for those same rights today,” said Thebert. “We need a real voice on the job through a union to help retain staff and dignified working conditions,” added Green.

Teresa Stanley, a member of Tidewater Sowers and a parishioner at Church of the Holy Apostles and member of the City's Human Relations Commission, declared that “The sin of systemic racism has resulted in a disproportionate number of the lowest-paid workers in essential public-sector employment being people of color and women. It is a moral imperative that as people of faith, we stand in solidarity with those that are working to dismantle oppressive economic practices for the common good of all.

“We believe that the economy must serve people (all people), not the other way around,” concluded Stanley. “This is why we stand firm in support of collective bargaining.”

After a brief rally and press conference outside City Hall, workers and their allies went inside and spoke at the City Council meeting. Among those addressing the city council meeting were Devon Conley of the city’s Department of Public Works, UE Eastern Region President George Waksmunski, Latasha Holloway of the Virginia Beach Coalition, Hannah "Mel" Borja of the Commonwealth Institute for Fiscal Analysis and Rev. Carlos Howard of the United Front For Justice. 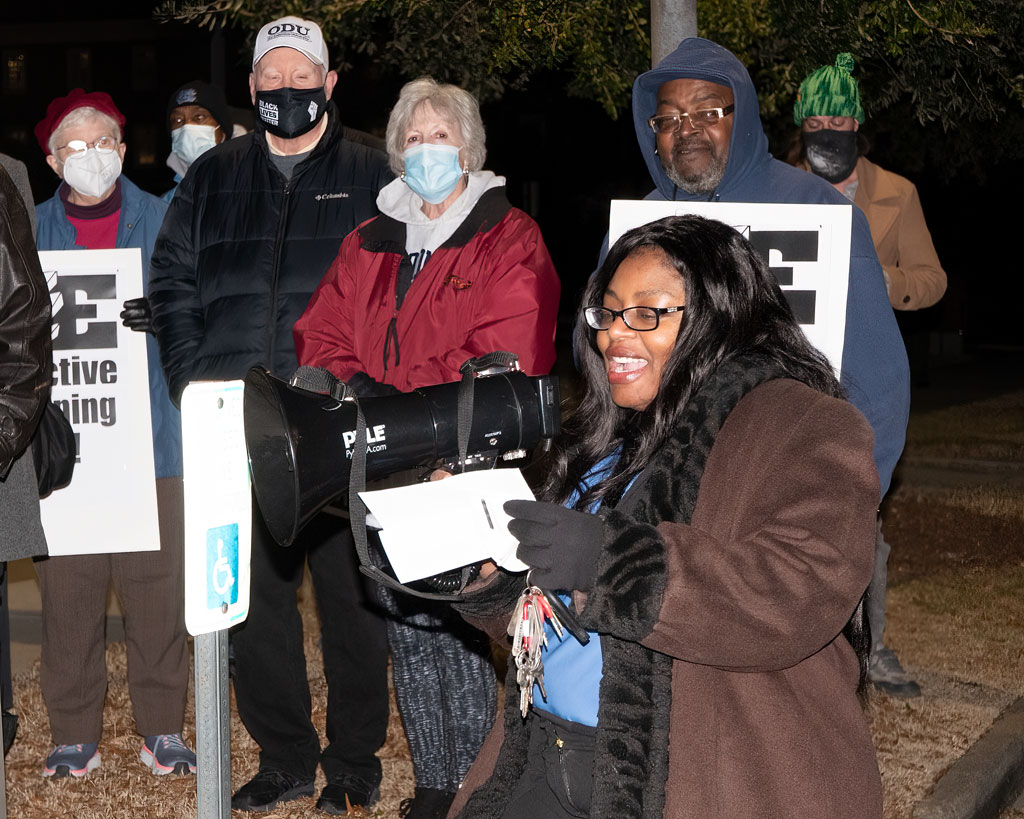 Mayor Robert Dyer refused to address the workers directly, instead choosing to read out the rules of the meeting — including a note about speakers remaining “civil.”  Workers vowed to return to work to sign up their co-workers for the union, and to return soon to the City Council to keep the fight moving forward.