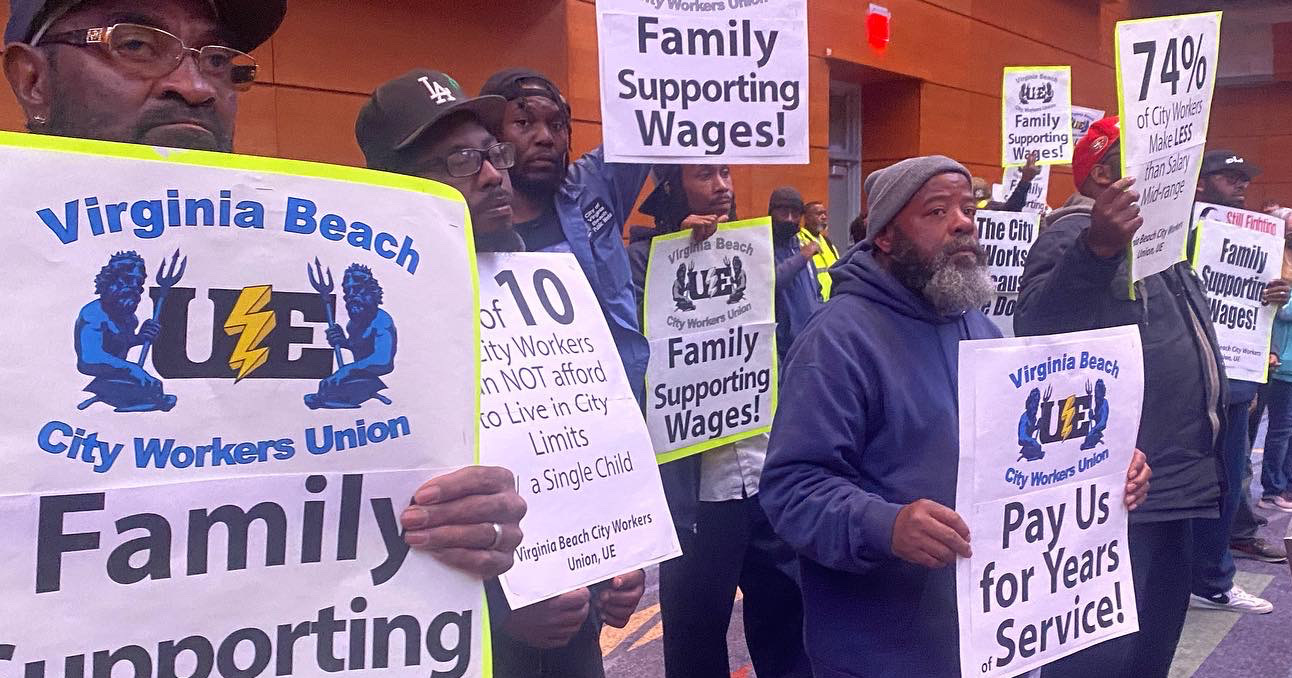 On Tuesday, May 10, UE Local 111 won a major victory for city workers in Virginia Beach when the city council approved a new budget that will raise the minimum wage for city workers from $10.87 to $15 per hour, establish a step system based on years of service that will cover virtually all non-management city employees, and raise wages for every city employee by at least five percent (in many cases, significantly more).

All told, the new budget will put almost $33 million in the pockets of Virginia Beach’s 7,400 full- and part-time workers.

“I’m happy to see this victory,” said Devon Conley, who works in Virginia Beach’s highways and stormwater department. “I thought never in my life time we would ever get a pay step plan.”

“I am very proud to have stood with everyone to make this happen,” added Virginia Beach human services worker Pat Thebert. “It’s a great thing to see the power we have as workers when we unite!”

Street maintenance worker Eric Ellerbe noted that, like in the Sam Cooke song, “A change is gonna come! Finally, we see it being manifested.”

The new increases are the direct result of city workers organizing new UE Local 111, the Virginia Beach City Workers Union, and taking collective action to demand serious raises. Since the beginning of the year, workers have rallied three times at city council meetings, demanding a $15 minimum wage, a step system, and reclassification of all pay grades that are more than five percent below market average. With the new budget, the city has fully met two of the union’s three demands.

Union members also met privately with several allies on the City Council. In late April, the mayor and vice mayor, feeling the pressure from Local 111’s mobilizations, agreed to meet with leaders of the union for the first time ever. Workers stood firm for their demands and following the meeting, the mayor and vice mayor issued a budget reconciliation letter on May 3 containing the largest raise Virginia Beach city workers have ever seen, raises that were approved by the full city council by a 10-1 vote a week later.

As the local’s May newsletter notes, “the devil is in the details of this budget plan. We must stay united, mobilized and keep pushing forward.”

Following this victory, Virginia Beach city workers will be building their union, electing officers for their new UE local on June 4, and making plans to be involved in the November city council elections. Under a new state law, effective since May of 2021, municipal workers in Virginia can engage in collective bargaining — but only if their city council passes a resolution enabling it, something the current council has been unwilling to do.

"We still have a long way to go,” said Terry Green, who works for the city’s public water utility. Referring to the city council members who oppose collective bargaining, he noted that “some of them are not thinking of the employee at all.” But UE members in Virginia Beach are ready for the struggle.

Local 111 is “not done yet,” said Conley. “This is just the beginning!” added Thebert.

This article was updated on Tuesday, May 17 to include a quote from Terry Green.