Social Security and Its Enemies 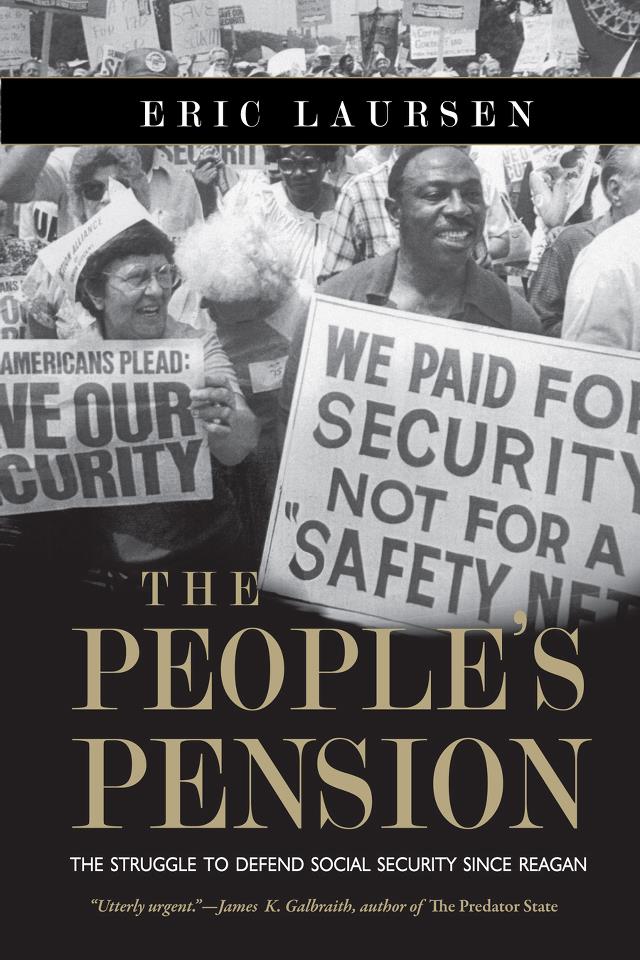 The People’s Pension: The Struggle to Defend Social Security Since Reagan

Social Security is one of the most popular and successful government programs in U.S. history. Despite political attacks and the mass of negative media treatment of the program over the past several decades, polls continue to show that a big majority of Americans – Republicans, Democrats, independents – support Social Security, oppose cuts to benefits, oppose privatization, and would support higher taxes to support it.

So why is the Washington elite – right-wing and centrist “think tanks”, policy “experts”, influential pundits, news media, congressional staffers, Republican and many Democratic politicians – so out of touch with working people, and so eager to cut benefits, privatize or otherwise get rid of Social Security? How is it that we have a Democratic president, twice elected by voters who overwhelmingly support Social Security, in his first term appointing a commission that called for benefit cuts, and in his second term proposing to reduce benefits by changing the cost-of-living formula?

It didn’t happen overnight, as Eric Laursen shows in his meticulously thorough political history, The People’s Pension: The Struggle to Defend Social Security Since Reagan. The development of the Washington consensus against Social Security began more than three decades ago. It’s been a well financed campaign. Billionaire businessman Pete Peterson (who was Secretary of Commerce in the Nixon administration) has been the most influential sugar daddy of the movement against Social Security over the past 30 years, sponsoring think tanks, organizations, and high-profile events. Since the early 1990s, when Social Security opponents agreed that their goal was privatization – replacing Social Security with private investment accounts – Wall Street brokerage, mutual fund and other financial services companies became big backers. These would be the big winners in privatization.

Laursen’s book is big – the text ends on page 726, followed by 90 pages of footnotes and index! But it’s very well-written and the story is fascinating. For those of us who care about social justice and are fighting to defend Social Security, it’s very helpful to have such a detailed account of how it came to be that such powerful forces in our country are out to destroy this program. For committed Social Security supporters and activists, it is well worth the time to read this book. You’ll gain a much deeper understanding of what we’re up against.

One of Laursen’s important insights is the degree to which elite Washington is an echo chamber. Its policy wonks, politicians, staffers, lobbyists and influential journalists listen to each other and spend their time with people like themselves. They don’t listen so much to ordinary working Americans. Once the people in that bubble convinced themselves that Social Security was in “crisis”, Laursen writes, “(t)he main issue, for these members of the Washington elite, was no longer how well it served a very large political constituency but how to make the numbers work in a game where the goal was to get a set of figures to balance out…”

Behind the movement against Social Security are a relatively small number of committed right-wingers with an ideology and an agenda. These businessmen, analysts, writers and politicians, whose political philosophy is  extreme individualism, are offended by the idea of social insurance and solidarity on which Social Security is based. What’s shocking is the relative ease with which these ideologues have been able to sell their ideas (such as that Social Security is an unsustainable “Ponzi scheme”, and that the younger generation is being robbed to support “greedy geezers”) and their policy prescriptions (raising the eligibility age, other benefit cuts, and privatization) to so much of Washington’s political and media mainstream. And once the Washington-based media bought into this formulation, it began broadcasting it throughout the country.

If you think the threats to Social Security come only from Republicans, this book will convince you otherwise. At least since the 1980s there have been Democrats eager to demonstrate how “reasonable”, “responsible” and “reformist” they were by pushing for cuts or privatization. Among the worst of these was Nebraska’s former Sen. Bob Kerrey and Massachusetts’ late Sen. Paul Tsongas.

Many of us have forgotten how President Bill Clinton undermined Social Security; this book reminds us. In his second term, he negotiated with Republican House Speaker Newt Gingrich over a plan to “save” Social Security that included partial privatization. A positive impact of the Lewinsky scandal and Clinton’s impeachment was that it killed that particular “grand bargain.” What caused lasting harm, Laursen argues, was “Clinton’s strategic decision to acknowledge the existence of a Social Security ‘crisis’ that needed to be ‘solved’ at once. No Democratic president had ever done so before, and Clinton’s decision effectively provided political cover for politicians of both parties to advance schemes for restructuring the program.”

Today the federal budget deficit is an excuse to cut or privatize Social Security. But Laursen reminds us that in the Clinton years, after the deficit was eliminated, the budget surplus was offered as an argument for cuts and privatization of Social Security. It seems that for those who want to gut our most important retirement and anti-poverty program, the right time to do it is always now.

Those who were shocked by Obama’s 2013 endorsement of cuts to Social Security’s cost-of-living protection may have forgotten that in 2010 he appointed the Simpson-Bowles Deficit Commission. The co-chairs Obama selected were known to be no friends of Social Security. Former Sen. Alan Simpson (R-WY) virtually made a political career out of bashing the program; and Erskine Bowles is a corporate Democrat who, as Clinton’s chief of staff, negotiated with Gingrich over privatization. The commission never released an official report because too many of its members disagreed with Simpson and Bowles, but the co-chairs issued their own report anyway, on December 1, 2010. Along with other federal budget cuts and new taxes, Simpson and Bowles called for raising the Social Security retirement age; means testing; and reducing the cost of living adjustments by adopting the chained CPI. On Medicare, they called for making seniors pay higher premiums.

Social Security is not now, and has never been, in a real financial crisis. But Laursen shows us that it has faced many political crises over the past 30 years, and the knives always seem to be out. In each of these crises, Laursen credits the work of union members, senior activists, and other grass-roots organizations in blocking Social Security’s powerful enemies. But those enemies are never really defeated, and the retirement program is constantly on the defensive. Laursen blames that fact on the bureaucratic structure of the Social Security program. While the philosophic origins of social insurance, including Social Security, lie in earlier mutual aid and cooperative movements, the federal government program created in 1935 (and Medicare as well) lack the democratic, participatory character of mutual aid. In his Epilogue, Laursen offers some suggestions for turning Social Security into more of a democratic, rank-and-file, mutual aid-type program.

Laursen’s long and detailed account of decades of attacks on Social Security by the rich and powerful could be a very demoralizing read, except for one fact: They have mostly failed. The American people loyally support Social Security and Medicare, despite being repeatedly told by TV news anchors, economists, senators, presidential commissions, and other “serious people” that the programs are a drag and  drain on our economy, and an insult to the virtues of “self-reliant individualism.” That simple fact of resistance, by our country’s working-class majority, should be a great source of hope.