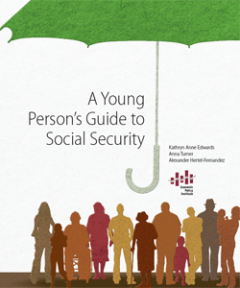 Many young people have doubts about whether Social Security will be there when they need it. Their fears or misunderstanding are not surprising, because there’s been a relentless propaganda campaign against Social Security over the past 30 years, by corporations, politicians, pro-corporate “think tanks” and the media. The misinformation campaign has been especially aimed at young people, and is intensifying. A “non-partisan” anti-Social Security curriculum is now been offered free of charge to high schools, funded by Wall Street billionaire Pete Peterson, one of Social Security’s fiercest enemies. The foes of Social Security figure that if they can convince young people that Social Security is unfair, bankrupt, or otherwise doomed, they will eventually be able to dismantle the program and hand the money over to Wall Street.

That’s why this new book, which is being made available free, is so important. It’s written by young people, for young people, but it’s informative and helpful for people of all ages.  The book is short – just 62 pages – well-written, easily understandable, and illustrated with charts, graphs and tables that hold the reader’s attention and keep it interesting.

The book summarizes the basic workings of Social Security – its self-funding mechanism, how benefits are calculated – as well as its impact in reducing poverty and stimulating the economy by maintaining the purchasing power of retirees. It explains the importance of Social Security’s disability and survivors insurance for the families of workers who die prematurely or become disabled.

The second chapter explains the concept of social insurance – “protection offered by a government against risks to broad groups of its citizens… protecting everyone from a risk that threatens everyone.” It examines why some kinds of risk are more effectively addressed by social insurance rather than by personal savings or private insurance.

“Social Security is the only major program in the federal budget that is funded entirely by dedicated revenue sources,” the authors write in introducing the chapter on Social Security’s finances. It is legally separate from the federal budget and has its own trust fund which at the end of 2011 totaled $2.7 trillion. However the trust fund’s board of trustees is required to include in its annual report long-term (75-year) estimates of the program’s solvency, and these indicate that, unless some adjustment is made, the program will begin to experience a shortfall in about 20 years – a shortfall of 2.67 percent between the 75-year projections of revenue and outlays.

This is a small and very long-range problem, and the authors examine its causes, as well as the pros and cons of various proposed solutions. In its nearly 80-year history Social Security has faced shortfalls before, and they’ve been eliminated by raising the payroll tax rate paid by workers and their employers. Increasing or eliminating the tax cap is an answer favored by UE: currently high-earners stop paying the Social Security tax when they make their first $110,100 a year, while most of us pay the tax on all of our earnings. The authors look at other ways to reduce or eliminate the long-term shortfall, including various proposals to cut benefits. Even though polls consistently show that the vast majority of Americans oppose any Social Security benefit cuts, cuts are all that Washington Republicans – and too many Democrats – want to talk about.

The book also explains why the decline of defined benefit pensions has made Social Security even more important, and in the final pages it examines, and refutes, five frequently-used arguments against Social Security.

A Young Person’s Guide to Social Security is a joint publication of the Economic Policy Institute (EPI) and the National Academy of Social Insurance (NASI). EPI is a non-profit, pro-union progressive think tank whose focus is “strategies to achieve a prosperous and fair economy.” NASI is a “non-profit non-partisan organization made up of the nation’s leading experts on social insurance” whose goal is “increasing public understanding of how social insurance contributes to economic security.” Both groups are based in Washington, DC.

Free hard copies of A Young Person's Guide to Social Security are available. Contact the NASI office via e-mail at nasi@nasi.org. Limit two copies per person. You can download the complete booklet as a PDF file by clicking here. Also check out Social Security; Just the Facts, a short video (less than four minutes) explaining Social Security.