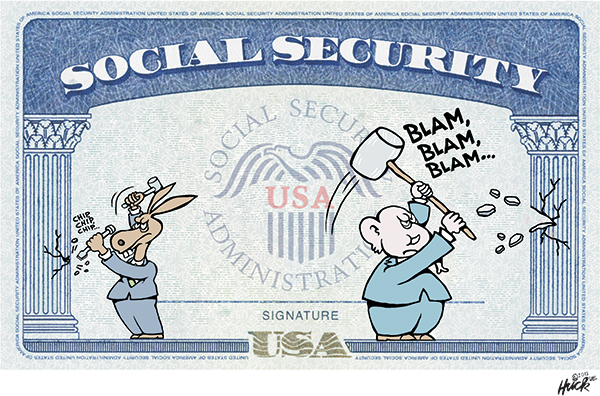 UE has always been a strong supporter of Social Security and Medicare, and has opposed all attempts to weaken these programs. For the past several years, as the general crises of retirement security and healthcare have worsened, UE has argued not only against cuts to these federal social insurance programs, but for moving in the opposite direction. We’ve been calling for our country’s political leaders to and expand Social Security and Medicare. UE has been an early and persistent backer of a national “single-payer” public health insurance program, also known as “Medicare for All.” In addition, UE says that Social Security benefits need to be doubled to provide retirement security for all.

It was the delegates to UE’s 2007 national convention who decided to go beyond defense – defending Social Security from political attacks – to an affirmative answer to the retirement crisis. They discussed and adopted a resolution entitled “Protect and Expand Social Security” which reviewed the history of the program, as well as the disastrous decline in pensions in recent years. The resolution looked back to the mid-1940s, when the U.S. labor movement was nearly unanimous in demanding retirement security and health security as rights of all workers, but not through collective bargaining to get employers to pay for pensions and health insurance. Instead, unions 70 years ago demanded legislation to expand Social Security into a true national retirement plan, and to establish national health insurance for all. The 2007 UE resolution concluded with a call for Congress to “address the country’s retirement crisis by expanding Social Security to pay retired workers 75 to 90 percent of their pre-retirement income.” (Social Security currently replaces only 33 to 40 percent of the average worker’s pre-retirement earnings.) UE’s national conventions of 2009 and 2011 reaffirmed that position by adopting similar resolutions.

As the attacks on Social Security in Washington have gotten worse, and as the collapse of the system of employment-based pensions has become impossible to ignore, other voices have begun to echo UE’s call for major expansion of Social Security. In December 2012 an article appeared in The Atlantic magazine, written by Washington policy analyst Steven Hill, with the title “Don’t Cut Social Security – Double It.” Hill recognizes that the right to retire is in crisis. The percentage of workers covered by defined benefit pensions has plummeted, and 401(k)s have proven to be a poor substitute. Hill writes, “401(k)s and other defined-contribution plans have turned out to be an unreliable pillar of retirement security, not only because they don’t provide as secure a net but because many Americans are pretty lousy at managing their investments.” Meanwhile, pensions for state and local government workers are severely underfunded, and the value of the biggest asset that many working people own – their houses – collapsed in the housing market crashed a few years ago.   Hill cites the Federal Reserve’s estimate that homeowners lost approximately $8 trillion in home equity in the Great Recession – a 53 percent drop in the value of the nation’s homes! This has had a devastating effect on the retirement prospects of millions of people.

Retirement in the U.S. is supposed to sit upon a “three-legged stool”, where the three legs are Social Security, pensions, and personal savings, which for most people is centered on home ownership. “But two out of three of these legs have been chopped back to blunted pegs,” Hill writes. His solution is “doubling the current Social Security payout, and turning it into a true national retirement system called “Social Security Plus.”

Hill presented a longer version of this proposal in August 2010, in a policy paper for the progressive think tank the New America Foundation (NAF). In April 2013, Hill and three other policy analysts at New America Foundation publisher “Expanded Social Security: A Plan to Increase Retirement Security for All Americans,” based on Hill’s earlier writings. What they call “Expanded Social Security” would be a two-part system including “Social Security Part A” – the current Social Security Old Age and Survivors Insurance program commonly called Social Security – and a Part B that would pay an additional flat amount – they proposed $11,669 a year – to all elderly earners. This is meant to guarantee a 60 percent income replacement for medium wage earners, and for low-income workers it would mean retirement income that would replace nearly 100 percent of what they earned before retirement.

Ezra Klein, a columnist and blogger for the Washington Post and a commentator on  MSNBC, has endorsed the proposals of Hill and his co-authors at NAF.  On April 5 Klein published a piece titled “Washington thinks entitlements are the problem. Maybe they’re the answer.” Klein calls for allowing people who are younger than the Medicare retirement age to buy into Medicare. He also agrees that we need a “much more generous” Social Security:

A statement adopted by the executive council of the AFL-CIO in  March 2012 describes the “retirement security crisis” we face.  “For millions of Americans, retirement seems an unreachable goal,” the labor leaders said, and they identified the causes: the decline of defined-benefit pensions, retirement savings “decimated” in the stock market crash, the loss of “trillions of dollars of home equity with the collapse of the real estate bubble”, “stagnation of wages that make it harder for workers to save,” and rising healthcare costs.

While the AFL-CIO did not call for doubling Social Security benefits, the statement recognized that serious increases are needed:

“While Social Security is an obvious solution to the crisis, its current benefit levels are too modest. Social Security’s income replacement rate is one of the lowest of all the industrialized countries. To compensate for the decline of traditional pensions and the loss of retirement savings, Social Security retirement benefits must be increased across the board, which would be especially meaningful for low-income seniors. In addition, Social Security COLAs need to take into account the higher health care costs faced by seniors.”

Meanwhile, Senator Tom Harkin (D-Iowa) has introduced legislation – the Strengthening Social Security Act of 2013 (S. 567) that would improve the formula for calculating Social Security benefits. It would increase benefits by approximately $70 a month – not the major increase that’s needed, but a step in the right direction. Harkin’s bill also improves the COLA formula, and would pay for these improvements by removing the current taxable income cap of $113,700. The online activist group MoveOn.org has launched an online petition in support of Harkin’s bill.

It’s good that the problem is being recognized. But we need much more than good words, correct analysis and even bills being introduced. We need action, organizing, mass protests involving millions of people.

Social Security came about in the 1930s not just because some well-meaning people in Washington saw the need for it. It was won through mass action by millions of people demanding economic justice: workers organizing and striking to build unions; and senior citizens organizing, signing petitions, staging protests to demand a national retirement plan to end poverty among the elderly. It will take that same kind of mass movement to revitalize Social Security and restore the right to retire in dignity.