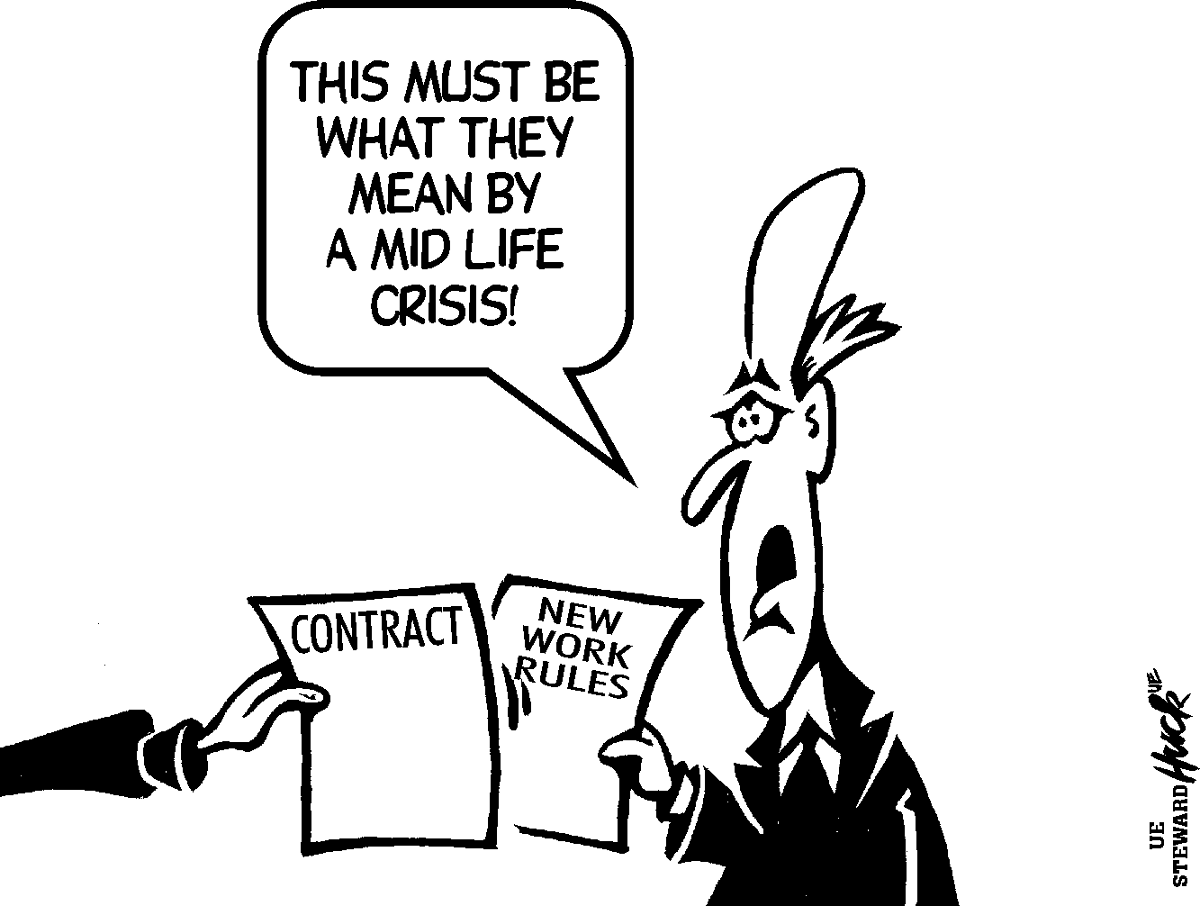 Our employer seems to believe that they have the right to change the contract whenever they want to. Just last week they announced that they were going to implement new work rules, including an absentee policy and drug testing. How can they get away with this?

Shouldn’t they have brought this up in negotiations?

Does it seem like management thinks it can change the contract whenever it wants to?  Here’s what to do when the boss wants to make major changes outside of contract negotiations.

It doesn’t seem right that management can try to make major changes outside of negotiations. Not too long ago an employer would have had to wait for contract negotiations, but its been a long time since there has been a “worker friendly government” and the NLRB keeps giving management more leeway.

What should the union do when the employer announces a new policy or changes an old policy or past practice?

There are five points that the Union must be ready to take action on:

1.  The Local should immediately give the employer a written REQUEST TO BARGAIN.

The written request can be simple:

The Union requests bargaining over the company’s stated plans to implement a new absentee policy. Please let us know when you will be available to bargain. The Union also reminds you that no changes to the current policy can take place until bargaining is concluded.

2. File a grievance if possible.

If the new policy or work rule is different than the old one, then the Union can also file a grievance over the unilateral change in an established procedure. Are we just trying to get two bites of the same apple here?  Maybe, but in some cases we can strike over unresolved grievances or we can arbitrate the issue.  We shouldn’t be ready to run to arbitration, especially if we think an arbitrator will say the employer had the right to make new work rules, but sometimes we may have a good case.

3.  The Local should give the employer a written request for any information that will be helpful to the Union during the negotiations.

The NLRB and State Labor Relations Boards all hold that management must provide the Union with all the information we need to make intelligent decisions.

What kind of information? Ask for everything that might justify management’s position.

If the employer wants a new absentee policy, demand all the absentee records. Ask to see the reasons employees were absent. If they are legitimate absences, this weakens the employer's argument. If they are talking about a group of people who “always miss work," demand to know who these people are. Check their records. Are they friends of a boss, so they never get disciplined for their absences?

If the employer wants a new drug testing policy you can demand to know how many instances of “drug abuse” there have been.  You might not get to see the names of everyone who may be involved in an employee assistance program, but you have a right to the numbers and reasons.  If the employer says they just want a drug testing policy, but they can’t prove a problem, then we have more reasons to make a policy that will not affect any workers.  The Union has a right to know which laboratory samples will be sent to.

All this information is important because the Union has the right to know if the boss has “reasons” for wanting changes or is just doing this to make the workers' lives miserable.

Failure on the employer’s part to provide all reasonable information is an unfair labor practice.

4.  Come prepared with proposals about things the Union wants.

If the employer wants to open negotiations, then the Union should come prepared to discuss what the Union membership wants.  If the employer says drug testing is necessary for safety reasons then the union should have a proposal on employee safety.  This may include firing certain bosses who cause stress, more lights in the parking lot, more breaks or rest periods, fixing equipment, hiring more employees so there is less overtime or a lighter work load.  DON’T BE AFRAID TO BARGAIN FOR WHAT WE WANT AND MAKE THE EMPLOYER BARGAIN SERIOUSLY.

5. Mobilize the members to fight if necessary.

While the Union might not be able to strike during the middle of the contract, the members can still take concerted action. They can take action to COLLECTIVELY let management know how they feel and to remind the boss that future relations will suffer if the employer tries to make changes without bargaining. Concerted action isn’t supposed to violate the contract. UE members have always been inventive when it comes to demonstrating their dislike of employer policies. Be sure to consult with a UE Field Organizer prior to taking action. Just as the members take action during contract negotiations they should be ready to take action during mid-contract bargaining.

What issues does management have to bargain over?

The NLRB and state Labor Relations Boards have issued decisions on what issues the employer must bargain over, called mandatory subjects and those subjects the employer doesn’t have to bargain over, called permissive subjects. A permissive subject is one the employer doesn’t have to bargain over but can if they want to or if we can make them. In most cases the NLRB says that a change has to have significant impact on employees in order to trigger the bargaining rule. For example, switching lunch times by five minutes might not be considered significant but changing starting times by one hour would be.

Should the Union bargain over work rules and absentee policies?

The situation is more complicated now because of the NLRB and courts whittling away Union rights. Now the NLRB says the boss should bargain with the Union over work rules and absentee policies. Following that, management HAS the RIGHT to implement either the negotiated rules or if impasse is reached, implement the employer’s rules.

Many arbitrators now consider employer written work rules and policies to be valid and enforceable.

The Union should state in it’s initial request to bargain and at every meeting that regardless of what rules or absentee policy is finally implemented, the “just cause” part of the contract remains in effect and takes precedent over the rules. Treat this just like contract negotiations and take time to mobilize the members for a fight around the issues.